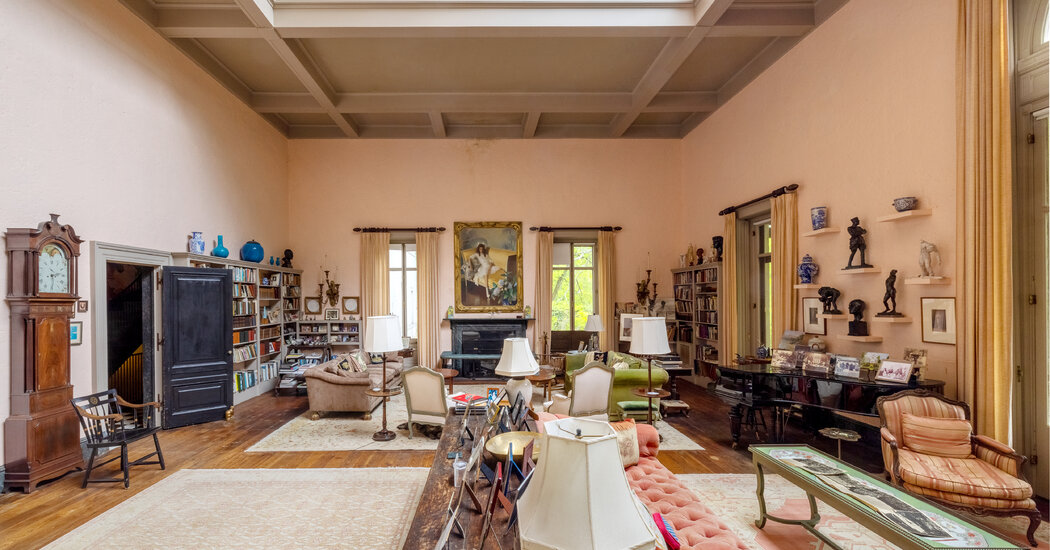 The sculptor Gertrude Vanderbilt Whitney, a bohemian aristocrat, left behind a sturdy legacy of patronage in the institution she founded: The Whitney Museum of American Art. But the long-term survival of two exuberantly decorated studios where she made her own artwork, one in Greenwich Village and one in the Long Island town of Old Westbury, is in doubt.

The Long Island studio, the last fragment to be sold off from what was once a thousand-acre Whitney family estate, was recently put on the market for $4.75 million. And though Whitney descendants have maintained the studio as a kind of shrine to their illustrious forebear and hope to find a buyer who prizes its history as much as they do, there is nothing besides good will and good taste to keep a new owner from razing the structure, which contains lush, built-in artworks Mrs. Whitney commissioned for the space.

the original was sold about four years ago to Cushing descendants.

Before the pandemic, Whitney Museum curators were interested in exhibiting the Cushing mural, but a museum spokeswoman said that there are currently no plans to do so. She added that the museum could not afford to buy the Long Island studio.

The Macdougal Alley studio has also lost some artworks. Mr. Chanler envisioned the room as an immersive experience that included a decorative screen and seven stained-glass windows depicting a Boschian jumble of fantastical creatures. All of these were removed long ago. Five of the windows languished at a nearby antiques store until they were ultimately purchased by James Alexandre, a Pennsylvania collector who also acquired the other two, one of which had once served as a shower door for a Whitney descendant. Mr. Alexandre said that, if asked, he would consider allowing digital reproductions of the windows to be made and installed in the Macdougal studio.

Mrs. Whitney used her expanding real estate holdings on West Eighth Street to exhibit the work of emerging American artists, whose creations she also steadily purchased. In 1929, she sent her assistant, Juliana Force, to offer her collection of more than 600 contemporary American artworks to the Metropolitan Museum of Art. The Met turned down the gift, and Mrs. Whitney responded by using her vast wealth to open what might be called, with apologies to Virginia Woolf, a “museum of one’s own.”

SAN FRANCISCO — Cleve Jones has lived in the Castro neighborhood for nearly 50 years, almost from the day he graduated from high school in Phoenix and … END_OF_DOCUMENT_TOKEN_TO_BE_REPLACED

A home inspection can spare you from unpleasant surprises after you buy. After crunching the numbers, searching your favorite neighborhoods, and … END_OF_DOCUMENT_TOKEN_TO_BE_REPLACED