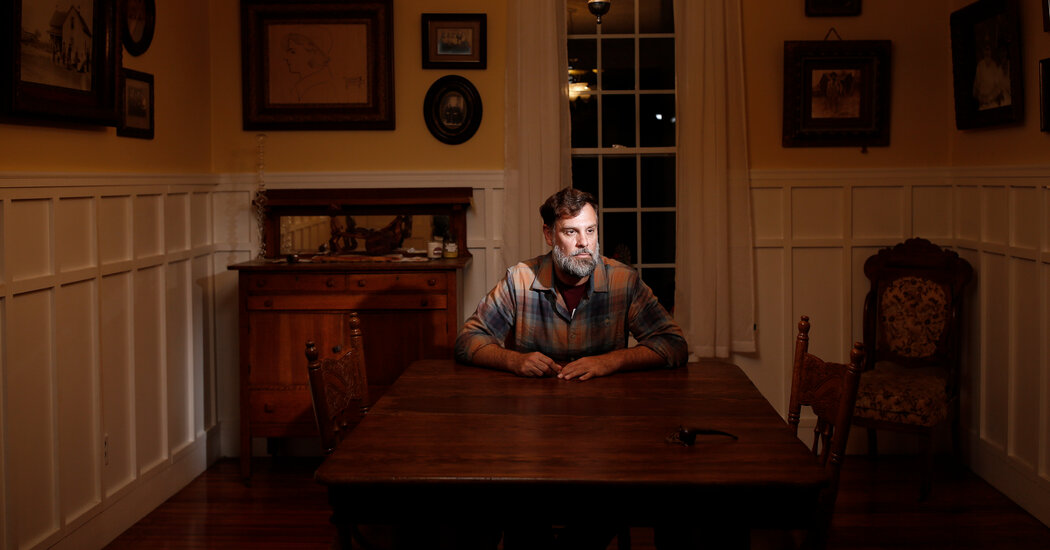 On a routine afternoon, Shane Booth, a photography professor living in Benson, N.C., was folding laundry in his bedroom, when he was startled by a loud, crashing noise. He stepped out to find a shattered front window and his dog sitting outside it. He was confused, how could his dog have jumped through the window with enough force to break it?

After cleaning up the glass, Mr. Booth came back to his room, where all of the clothes he had just folded were scattered and strewn about, he said. “That’s when I thought, this is actually really scary now,” said Mr. Booth, 45.

In an interview, Mr. Booth described several other inexplicable, eerie encounters that have led him to believe that his century-old house is haunted. Pictures that he’d hung on the wall he’d later discover placed perfectly on the floor with no broken frames to indicate a fall. He noticed vases moved to different locations, had momentary sightings of a ghost (an old man), and heard bellowing laughter when no one else was in the house. “There’s so many little things that sporadically happen that you just can’t explain,” he said.

Many Americans believe that their home is inhabited by someone or something that isn’t a living being. An October study from the Utah-based home security company Vivint found that nearly half of the thousand surveyed homeowners believed that their house was haunted. Another survey of 1,000 people by Real Estate Witch, an education platform for home buyers and sellers, found similar results, with 44 percent of respondents saying that they’ve lived in a haunted house.

sold above asking price for $1.525 million. In 2021, a Massachusetts property that was the site of the infamous Borden family murders sold for $1.875 million without any open houses or showings. Dozens of Airbnb listings advertise phantasmal experiences as well, such as a “second-floor haunted oasis” or a “Phantoms Lair.”

“Embracing a home’s haunted history may be a scary good seller strategy in the race to go viral,” said Amanda Pendleton, Zillow’s home trends expert. “Unique homes captured the imagination of Zillow surfers during the pandemic — the more unusual a listing, the more page views it can generate.”

Sharon Hill, the author of the 2017 book “Scientifical Americans: The Culture of Amateur Paranormal Researchers,” added that “many are no longer fearful of ghosts because we’ve been so habituated to them by the media.”

Haunted houses can also be “a way to connect to the past or a sense of enchantment in the everyday world,” Ms. Hill said. “We have a sense of wanting to find out for ourselves and be able to feel like we can reach beyond death. To know that ghosts exist would be very comforting to some people.”

Still, most sellers and agents are wary of taking that strategy. Of the over 760,000 properties on Zillow in the last two weeks, only two listings had descriptions that implied the home could be haunted, according to data provided by Zillow. One property is a six-bedroom hotel in Wisconsin where the description boasts that it was recently the subject of a Minnesota ghost hunter group’s investigation. The other, a rundown three-bedroom in Texas built in 1910, reads, “If your dream has been to host a Haunted Air BNB look no further. Owner has had ghost hunters to the house twice overnight.”

Most states don’t mention paranormal activity in real estate disclosure laws, but New York and New Jersey have explicit requirements surrounding it. In New Jersey, sellers, if asked, must disclose known information about any potential poltergeists. In New York, a court can rescind a sale if the seller has bolstered the reputation of the home being haunted and takes advantage of a buyer’s ignorance of that notoriety.

survey found that nearly 30 percent of Americans were religiously unaffiliated, 10 percentage points higher than a decade ago.

After all, the same comfort or understanding that religion can bring people can also be found in paranormal beliefs.

Karla Olivares, a financial consultant living in San Antonio, Texas, said that growing up in a house she believed was haunted has made her more accepting of the unexplainable happenings that have occurred in other places she’s lived or visited.

“When I feel something now, I acknowledge it. It’s also made me become more spiritual myself,” Ms. Olivares, 27, said. “Now, I feel that it’s all around me, and I won’t get surprised if I feel something again.”

AUSTIN, Texas--(BUSINESS WIRE)--As the first multifamily management company to be recognized in the Public Relations and Marketing Excellence Awards, … END_OF_DOCUMENT_TOKEN_TO_BE_REPLACED

There have been whispers of cooling housing and rental prices in the San Francisco Bay Area, but that hasn't yet translated into practical, noticeable … END_OF_DOCUMENT_TOKEN_TO_BE_REPLACED

Cars pass in Independence Square at twilight in Kyiv, Ukraine, Monday, Oct. 31, 2022. Rolling ... [+] blackouts are increasing across Ukraine as the … END_OF_DOCUMENT_TOKEN_TO_BE_REPLACED