Despite record-warm years and some crops already reacting to unusual shifts in the weather, climate change for many people remains an issue for the future. That future came a little closer this year, when scientists studying Antarctic ice loss reported that if carbon emissions continue unabated, sea levels could rise six feet this century — significantly higher than previous predictions of a two-foot rise by the year 2100.

If the oceans rose six feet today, 1.87 million homes in the United States valued at $882 billion would be flooded by sea water, according to a Zillow Research analysis using data from the National Oceanic and Atmospheric Administration (NOAA).

Doug Aschenbach, a retiree from Ohio who lives in a Fort Lauderdale high-rise, figures it would take fewer than six feet of water to have a significant impact in his area. Indeed, Zillow’s analysis shows Fort Lauderdale is the U.S. city that would have the most homes under water — more than 38,000 — if the ocean rose six feet.

“On the one hand, I joke that I’m on the 16th floor, so I’ll be okay,” he said. “But on the other, our building has an underground parking garage right on the beach, so there are infrastructure issues.” 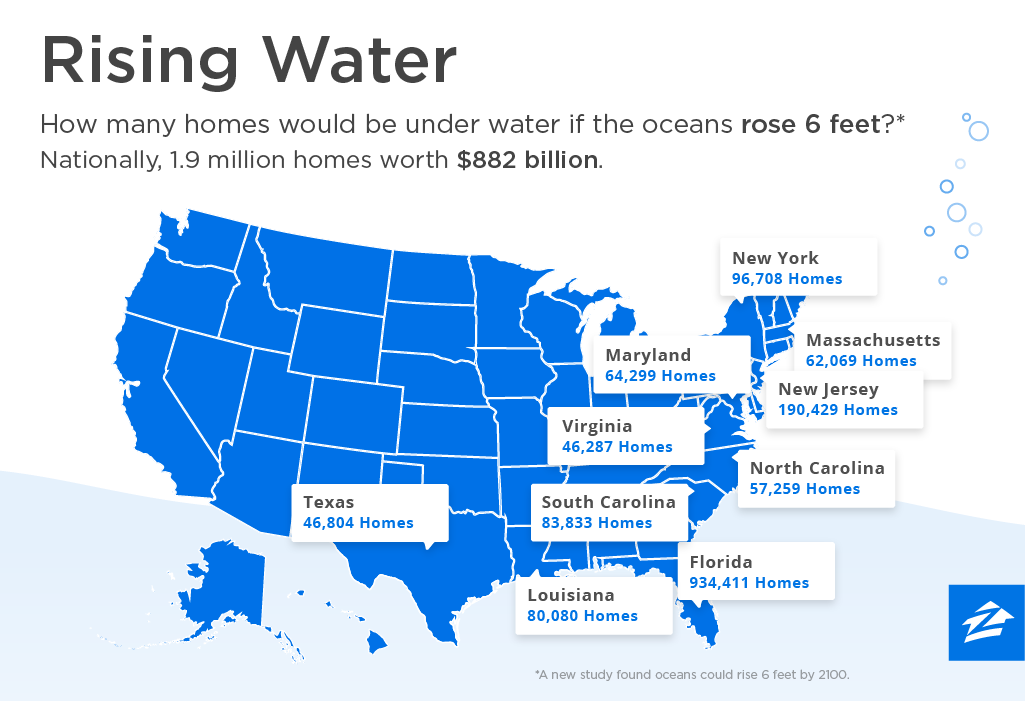 Aschenbach is heartened that these predictions are for decades into the future. “As long as city officials and others are thinking about them now, I view that as a good sign, because it will happen so gradually that there could be solutions to prevent a catastrophe.”

Some areas are preparing in a big way. Miami Beach, where nearly 37,500 homes would be affected, plans to spend a half-billion dollars over the next several years to install pumps and raise roads and sea walls. So-called “king tides” already are causing more damage there than they used to, The Miami Herald reported.

The city plans to break ground next year on a barrier system (known as “the Big U”) meant to protect lower Manhattan. It will start with “an undulating 10-foot-high steel-and-concrete-reinforced berm” running about two miles along the East River.

That sort of wall suits Manhattan, which is built on granite bedrock, said climate impact scientist Benjamin Strauss at Climate Central, a nonprofit news organization that reports on climate science. (Its online Surging Seas Risk Finder shows what effect rising waters will have on U.S. coastlines. By plugging in cities and postal codes, people can gauge which areas would be soaked at various water levels.)

Despite the risks, Strauss thinks “Manhattan will be with us for a long time. There are so many assets concentrated in such a small area that I’m sure people will invest heavily to protect it.”

South Florida might not be so fortunate, because its bedrock is porous. If sea levels permanently rose six feet or more, water would push through the rock like a sponge, Strauss said. “You can’t build a wall across the top of a sponge and keep water from getting from one side to the other.”

That makes it likely, Strauss said, that a lot of people will have to leave southern Florida. He recently told the U.S. Senate Committee on Energy and Natural Resources that high-end projections for this century would turn Miami-Dade County into a “collection of islands.”

Migrations caused by rising sea levels would create a paradigm shift from a world with stable shores to one with moving shores, Strauss said. “And they’re going to keep moving for centuries.”

He also pointed out that ports all over the world are at sea level. “Europe has been rocked by a migration crisis the last couple of years, but that’s very small compared to what the world is likely to see if the sea-level rise continues to accelerate.”

While some land loss is inevitable, and is already happening in places like Louisiana, humans still appear to have the capacity to minimize how much and how quickly the seas rise.

For example, the new study predicting a potential six-foot rise by the end of the century said scenario is possible if carbon emissions continue unabated. Reducing emissions to zero over the next 50 to 60 years, however, would likely keep the increase closer to two feet.

There’s nothing in place that calls for such drastic measures, but Strauss remains hopeful.

“Just as there are scary tipping points in the climate system, there are things that could change much more quickly than we expect with technology and economic tipping points,” he said. If solar power suddenly became cheaper to produce than power from existing plants, “that would cause a much more rapid shift than anything anyone is talking about in global [climate] negotiations.”

While it’s possible to calculate the value of the homes that would be flooded by a six-foot rise in the oceans, it’s difficult to surmise the real-world impact.

Insurance companies tend to cover property using annual contracts, so they are more focused on the short term — for example, how climate change may affect current weather patterns, such as droughts, hail, tornadoes, hurricanes and heavy rains.

Reinsurers look at the bigger picture. Because they essentially insure insurance companies, the risk they take on for any given natural disaster can be considerably higher than a single insurer’s risk.

Asked about the predictions of seas rising six feet, Dennis Burke, vice president of state relations at the Reinsurance Association of America said, “If that happens, there will be parts of the country that are uninhabitable. That should be a concern to all of us, particularly with the shifts in demographics where more people are moving toward the coast because it’s a nice place to live.”

“The industry is in touch with NOAA, and understands that the science indicates there will be rising sea levels, said Burke, who also spoke at a climate risk summit this summer in Washington State.

“Fortunately, the predicted sea-level rise gives us time to prepare. Individuals and society need to think about how and where to build – and to what height, and with what building techniques and materials,” Burke said.

While there will still be risk, the insurance industry stands ready to aid homeowners. “Reinsurers have the capacity to insure natural catastrophes, including floods, and are eager to help insurers and society manage risk to give consumers peace of mind that they can rebuild their lives if necessary,” Burke said.

A shopper carries a bag outside a Walmart store in San Leandro, California, on Thursday, May 13, 2021.David Paul Morris | Bloomberg | Getty … END_OF_DOCUMENT_TOKEN_TO_BE_REPLACED

The rapper and entrepreneur Sean "Diddy" Combs has recorded a sale of one of his many homes. As we mentioned in our rundown of the impresario’s … END_OF_DOCUMENT_TOKEN_TO_BE_REPLACED