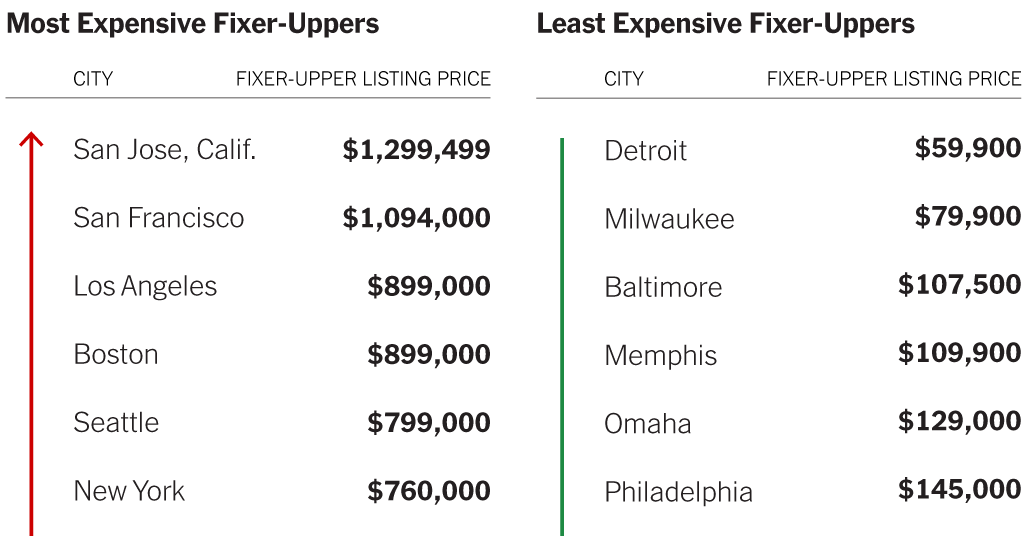 The frantic pandemic pace of the housing market in the United States may be slowing, but the shortage of available homes remains, especially affordable ones.

What about a fixer-upper? According to a recent study by StorageCafe, in 36 of the 50 largest U.S. cities, fixer-uppers list for at least 25 percent less than a typical turnkey home; in nine of those cities, the discount tops 50 percent. Perhaps it’s time to cue up those “Property Brothers” reruns? (To identify “fixer-uppers,” analysts scanned StorageCafe’s real estate platform, Point2, for listings tagged as “TLC,” “good bones,” “as-is,” “need of repairs” and other such terms.)

Of course, a lower price is useless if it doesn’t make a home affordable. In Los Angeles, among the most expensive American cities, a typical fixer-upper comes with a $500,000 discount — the largest dollar amount among the 50 cities. Unfortunately, that only drops the average list price to $899,000 — still out of reach for many. Two other California cities, San Diego and San Francisco, offered the next-best discounts, each saving buyers at least $405,000 compared with a turnkey home in the area.

While a discount is great, buying a sagging property is only the beginning of the process. You still have to get the work done. You may be able to finance and plan renovations from the get-go, but projecting future costs can be tricky given the continuing shortages of materials and the shifting costs of labor.

But when it comes down to it, that fixer-upper could well cost more next year than it does this year, so snagging it now may be worth the renovation headaches ahead.

Hometown Deli, Paulsboro, N.J.Mike Calia | CNBCThree men were charged with fraud and other crimes in a scheme involving a company that was worth $100 … END_OF_DOCUMENT_TOKEN_TO_BE_REPLACED

The childhood home of "The Morning Show" actor Nestor Carbonell recently hit the market in Greenwich, CT, for $4.4 million.Fans will appreciate that … END_OF_DOCUMENT_TOKEN_TO_BE_REPLACED