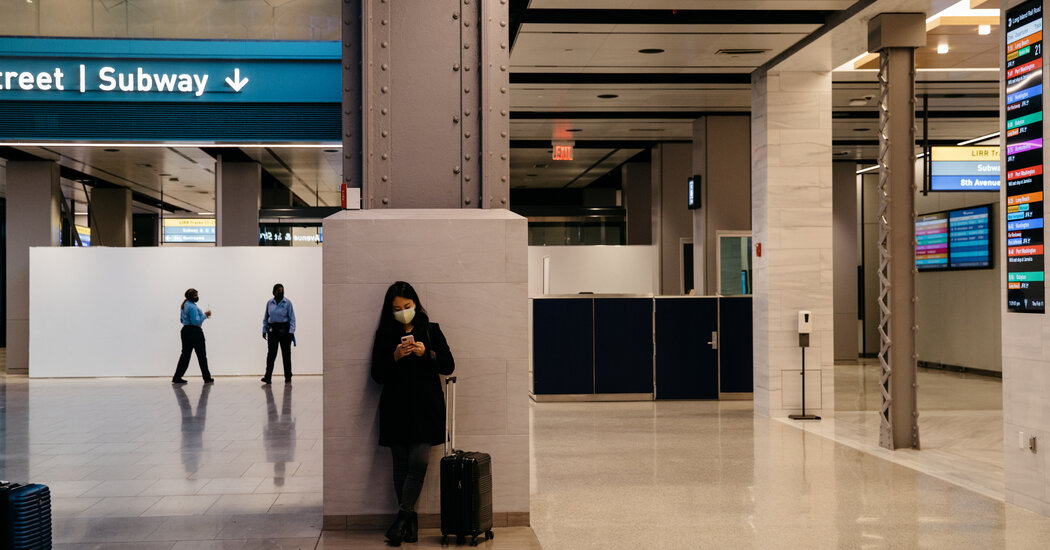 For years, one of Gov. Andrew M. Cuomo’s top priorities has been an enormous development in the heart of Manhattan that would be among the largest real estate projects ever built in the United States.

Ten new buildings — five taller than 1,000 feet — would rise around Pennsylvania Station and form a towering business district stretching west toward Hudson Yards, the biggest private development in the country, and east to the Empire State Building.

At the center, the universally disliked rail station — North America’s busiest train hub — would be brought into the modern age with a sleek, expanded redesign and additional tracks and platforms. Before the coronavirus pandemic the transit hub served 600,000 daily riders on subways, commuter lines and Amtrak trains that crisscross beneath Madison Square Garden.

But the world has changed both for Mr. Cuomo, who has been weakened by deepening scandals that threaten his tenure, and for New York, where the pandemic has made remote work a lasting legacy and there is a record glut of office space.

city moves to reopen and loosen nearly all pandemic restrictions.

“Do we need 10 more supertalls in the surrounding area of Penn Station?” asked State Senator Liz Krueger, a Manhattan Democrat. “Will there be demand for it?”

Mr. Cuomo argues that a global capital like New York needs a world-class transit hub and an ambitious development — “The next great investment,” he said in February — to transform a dowdy slice of Manhattan into a sleek commercial corridor. It would also achieve the dreams of many business leaders who have long sought to build big around the city’s most important transit nexus.

The state intends to pay for the rebuilding of Penn Station, which would cost an estimated $16 billion, through the development of the new towers, whose owners would contribute part of the revenue from office leases, retail sales and other sources. But generating the needed money could be difficult if office buildings become less desirable.

Critics also argue that the project would mainly reward one of New York’s most powerful real estate firms, whose chief executive and family have contributed hundreds of thousands of dollars to the governor’s campaign.

eleventh hour state budget negotiations in Albany. On one side, Mr. Cuomo’s aides stressed that the project was his highest priority, making clear he would not tolerate any effort by the Legislature to remove his request for $1.3 billion. The funds would be used to buy dozens of properties, including low- and mid-rise office buildings, residences, shops and restaurants for the development.

In the end lawmakers celebrated what they saw as a victory: The $1.3 billion was restricted to transportation improvements at Penn Station though it may be somewhat symbolic since the state said it still had the power to clear land for the project.

The state also buckled to critics and agreed to an outside review by an array of stakeholders, including the city, local community boards, the Metropolitan Transportation Authority, New Jersey Transit and Amtrak, to look at the best ways to pay for a new rail terminal.

While the review’s findings would not be binding, they could complicate and delay the process and even lead to legal challenges.

opened in January and serves Amtrak and the Long Island Railroad and siphons off some of the crowds at Penn Station, but did not add more train tracks.

Mr. Roth and his wife, the theater producer Daryl Roth, have collectively given Mr. Cuomo about $400,000 in campaign donations. State officials said the donations had nothing to do with Vornado’s role in the venture.

“Manhattan’s West Side is the economic growth engine for the city,” Mr. Roth said in a statement, “anchored by Penn Station, the most vital transportation center for the region.”

MUSCATINE, Iowa--(BUSINESS WIRE)--HNI Corporation (NYSE: HNI) announced today its Board of Directors declared a quarterly dividend of 32 cents per … END_OF_DOCUMENT_TOKEN_TO_BE_REPLACED

Tokyo (CNN) — The Japan Tourism Agency announced on Tuesday, May 17 that it would start allowing small group tours in May as part of a "test tourism" … END_OF_DOCUMENT_TOKEN_TO_BE_REPLACED

If you’re superstitious, today is your day.That's because it's Friday the 13th (the only one of the year, in fact). It's a day when bad juju reigns … END_OF_DOCUMENT_TOKEN_TO_BE_REPLACED