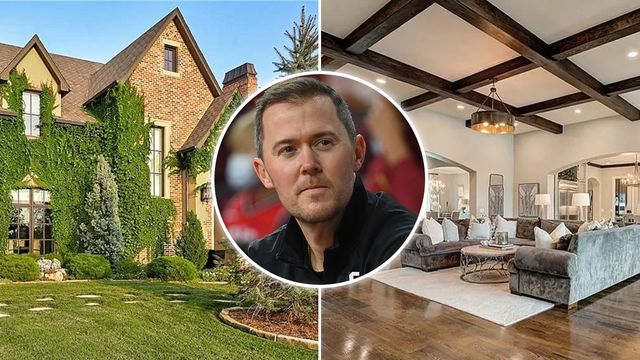 Listed in August 2021 for $2.1 million, the upscale abode is now in pending sale status. It’s also the most expensive place on the market in the college town, where the current median list price sits at a modest $265,000.

Riley, 38, purchased the property back in 2017 for $1.9 million, in the year he was named head coach of the Sooners. If he gets his asking price, he may eke out a small profit.

The fact that the home landed on the market prior to the 2021 season was perhaps a true indicator of the coach’s wandering eye.

In November, Riley migrated West and accepted the position as head coach of the University of Southern California Trojans. He’s since vacated the area, as well as his luxe dwelling.

We’re calling it. Coach’s home is a win.

Spread across a roomy 7,500 square feet, it has space to host an entire team. Built in 2016, the home offers five bedrooms and seven bathrooms. Highlights include a main floor with an open living area, and walls of glass that connect to the backyard.

A kitchen includes a breakfast nook and looks out to the living area and fireplace. The floor plan also includes a formal living room on the lower level, along with two bedroom suites.

AUSTIN, Texas--(BUSINESS WIRE)--As the first multifamily management company to be recognized in the Public Relations and Marketing Excellence Awards, … END_OF_DOCUMENT_TOKEN_TO_BE_REPLACED

There have been whispers of cooling housing and rental prices in the San Francisco Bay Area, but that hasn't yet translated into practical, noticeable … END_OF_DOCUMENT_TOKEN_TO_BE_REPLACED

Cars pass in Independence Square at twilight in Kyiv, Ukraine, Monday, Oct. 31, 2022. Rolling ... [+] blackouts are increasing across Ukraine as the … END_OF_DOCUMENT_TOKEN_TO_BE_REPLACED