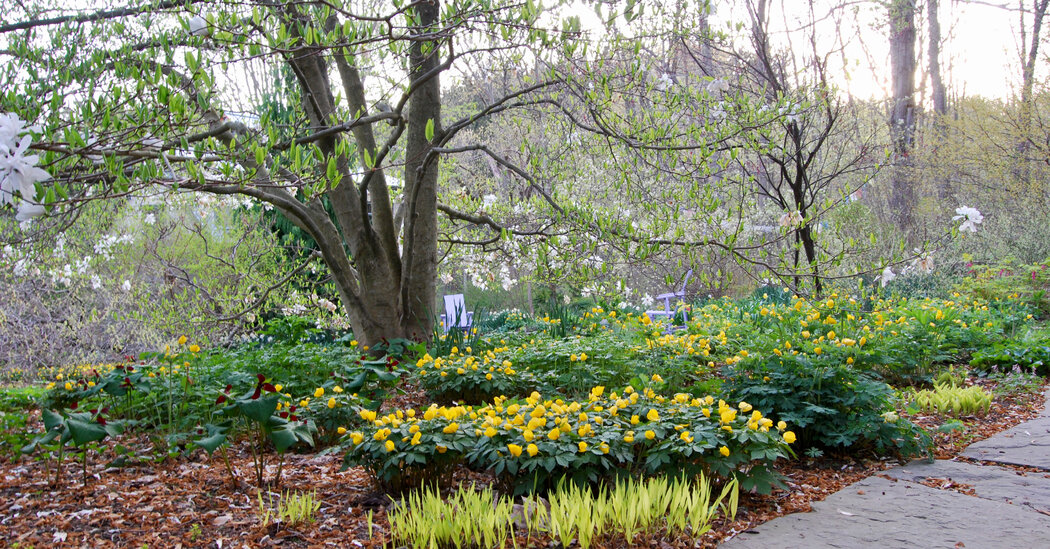 Proceed at your own risk — and please, bring a list. That’s my best advice for spring visits to the garden center.

Do not misunderstand: I am all in on shopping for plants anytime, just not on making buying decisions based on the giddy madness of pure impulse.

Instead, consider strategically delayed gratification, which probably means skipping the showiest of-the-moment plants in favor of those that might not be in peak form yet, or even have fully awakened.

On the ride home from such a well-tempered shopping expedition, the car won’t be stuffed with color. But in its aftermath, the garden will be — and at less expected times, when it may otherwise be lacking. I admit to pacifying myself with a flat of violas on the passenger seat (oh, the scent). But as for the springtime perennials and shrubs, I mostly leave them behind.

“GrowerTalks” and the companion “Acres Online” newsletter, “most garden centers I talk to will throw out the 80-20 rule: that 80 percent of their business is done in what the industry affectionately calls ‘the 100 days of hell.’”

incorporating native plants. It provides insects and, in turn, other creatures with what they need over an extended period — a sequence of pollen, nectar, fruits and seeds — starting with February’s first pollen-covered pussy willows (Salix) in my Northeastern garden.

A backbone late-season element of my bird-focused plantings, the fall-fruiting, lipid-rich winterberry holly (Ilex verticillata), fuels some birds’ migration and sustains others who stay behind. But the winterberries you see at the garden center now may look like little more than a nursery pot of sticks and tiny leaves, as will powerful late-season native perennials like asters and goldenrods.

They might be the plants you need, but they won’t be the first thing to catch your eye.

“What’s in bloom will be up front, along with the roses and hydrangeas everyone is asking for,” Mr. Beytes said. “At the good garden centers, all the other stuff is there, too — but maybe in the back hoophouse. Ask.”

fragrance over many months, and even to fall foliage, if turning up the heat on the far end of the season is a goal.

In my garden, some sumacs may start to turn as September arrives, while other natives like blueberries (Vaccinium, which pollinators and birds appreciate) remain fiery into November, as spicebush (Lindera benzoin) continues beaming its vivid yellow.

Soil moisture and temperature patterns shift the precise timing and intensity year to year, but you get the idea: Even what is traditionally considered fall foliage season can be extended with advance research.

Visiting the garden center and local public gardens in quieter months — especially those when your garden is lacking — can provide ideas.

weeding rampage against garlic mustard (Alliaria petiolata). I’m also continuing the removal of some thuggish ground covers I planted years ago, a task I set as one of my New Year’s garden resolutions.

In both cases, as I pull and dig, I try a little positive reinforcement: I remind myself that I’m making room for a few strategically chosen adoptees.

Margaret Roach is creator of the website and podcast A Way to Garden, and a book of the same name.

AUSTIN, Texas--(BUSINESS WIRE)--As the first multifamily management company to be recognized in the Public Relations and Marketing Excellence Awards, … END_OF_DOCUMENT_TOKEN_TO_BE_REPLACED

There have been whispers of cooling housing and rental prices in the San Francisco Bay Area, but that hasn't yet translated into practical, noticeable … END_OF_DOCUMENT_TOKEN_TO_BE_REPLACED

Cars pass in Independence Square at twilight in Kyiv, Ukraine, Monday, Oct. 31, 2022. Rolling ... [+] blackouts are increasing across Ukraine as the … END_OF_DOCUMENT_TOKEN_TO_BE_REPLACED