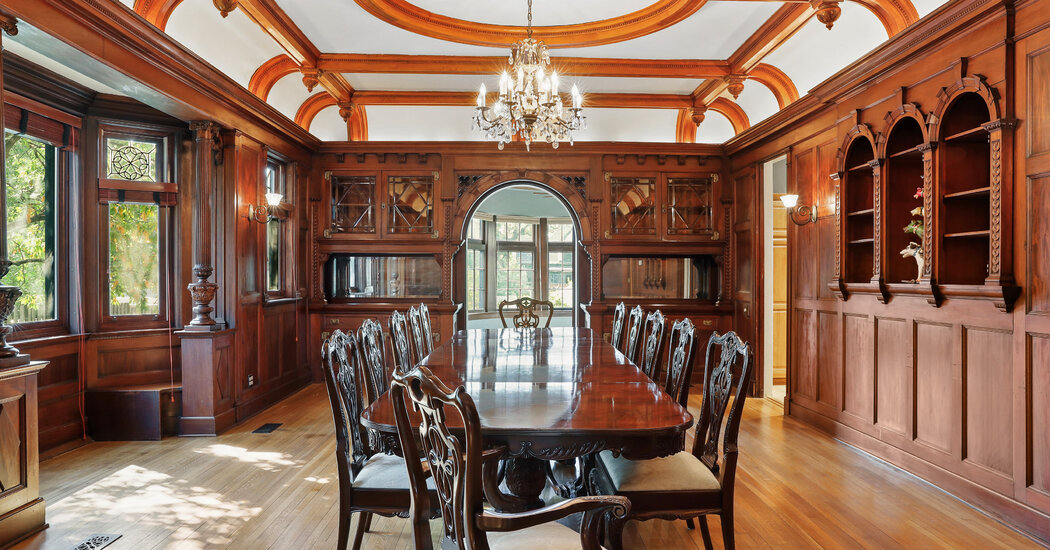 An 1894 Queen Anne Victorian with five bedrooms, four full bathrooms and three half bathrooms, on a 0.46-acre lot

This home is on Summit Avenue, a 4.5-mile stretch containing 373 Victorian homes — the greatest concentration along a single street of any city in the United States, and the inspiration for not one but two national historic districts. F. Scott Fitzgerald, who once described the avenue as “a mausoleum of American architectural monstrosities,” lived for a time in his parents’ house on a block diagonal to this one; the writer Sinclair Lewis lived not far east of that. The restaurants and shops along Grand Avenue are a block south. Downtown St. Paul is about two miles northeast.

Indoors: Designed by Louis F. Lockwood, an architect who worked on a number of Summit Avenue houses, this property is known as the Augustus H. Schliek House, after the first owner, a shoe manufacturer. It began its life with wood clapboard siding, but in 1909, a subsequent owner covered the wood in stucco and added the porch in front and the two-level sunroom in back. He is also believed to have contributed the mahogany-paneled dining room, with its custom table that seats 14.

Ornate double wood doors inset with metal medallions usher you into a grand, marble-floored entrance hall with a working fireplace, a round seating bench and a curved window bay. A stairway is partially encased with paneled and carved millwork. Two sets of pocket doors open to a living room with narrow floorboards and a tiled fireplace. The dining room, with its cherry ceiling molding, carved mahogany paneling with matching Venetian blinds and deep window bay with leaded glass, follows. Built-ins flank an arch at the far end of the room that leads into a sunroom addition with curved walls and a timber ceiling. The sunroom’s carpet was installed two years ago.

The sunroom connects to the kitchen through an open breakfast room looking out (and exiting) to the backyard. (You can also enter the kitchen from the main hall.) The appliances date from 2005 (the butcher-block island cooktop and microwave oven) to 2018 (the Sub-Zero refrigerator-freezer). There is a half bathroom off the kitchen.

GREENVILLE, N.C.--(BUSINESS WIRE)--Employers aiming to win the war on talent have a new “A” team to tap into: college and professional athletes. … END_OF_DOCUMENT_TOKEN_TO_BE_REPLACED

Mortgage rates are likely to rise in July, extending a seven-month streak. High inflation, and the Federal Reserve's efforts to control it, have … END_OF_DOCUMENT_TOKEN_TO_BE_REPLACED