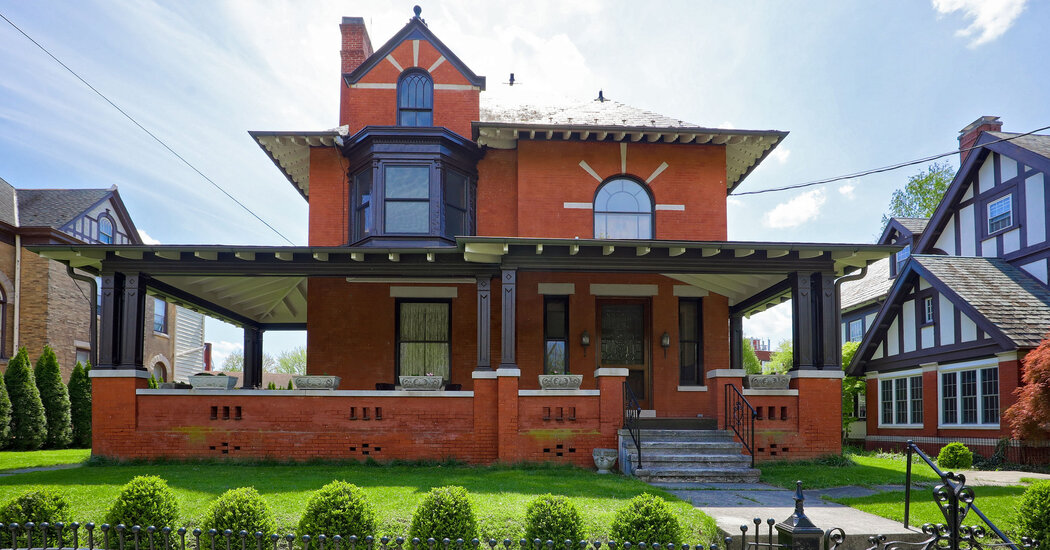 A circa-1900 eclectic brick house with seven bedrooms, three full bathrooms and two half bathrooms, on a 0.3-acre lot

This property is in School Lane Hills, a neighborhood about a mile west of the city of Lancaster, so it is within walking distance of Lancaster Central Market, the Fulton Theatre and numerous shops and restaurants. It is a few blocks south of Buchanan Park and the campus of Franklin & Marshall College. Wheatland, the Federal-style house to which President James Buchanan retired after failing to prevent the United States from descending into civil war, is a mile down the road (you can visit the house virtually during the pandemic).

Indoors: The sellers renovated the house in two phases, followed by updates. In the first phase, from 2002 to 2010, they concentrated on the first-floor public rooms and a second-floor bedroom and study, removing century-old wallpaper, repairing plaster, refinishing floors and cleaning, restoring or replacing period glass, built-ins and lighting. They also did roof repairs, painted interior and exterior woodwork, and renovated the entire third floor.

From 2012 to 2013, they got really serious and renovated five bedrooms, two bathrooms, the sunroom, the grand stairway and the kitchen (with breakfast room). They also rebuilt all three rear entrances, enclosed a porch and a balcony, and landscaped three sides of the house, adding a stone retaining wall and 45 arborvitae trees. They estimate their total renovation investment at more than $500,000.

The entrance is through a deep, covered, wraparound porch, into a vestibule ornamented with chestnut wood and leaded glass, a recurring theme. The foyer that follows has a chestnut fireplace with a tiled surround and hearth and chestnut columns supporting the mirrored overmantel (additional columns introduce the grand chestnut staircase). Turning left upon entering takes you into a living room that has a fireplace with a marble surround. Beyond that is a library with a bay window and floor-to-ceiling shelving. And beyond that is a formal dining room with a paneled wainscot and a crystal chandelier. All of these rooms can be closed off with pocket doors.

The building, which has five units, is smack in the middle of the historic district, a couple of blocks from the writer Flannery O’Connor’s childhood home and less than half a mile northeast of Forsyth Park. It is an easy walk from there to the campus of Savannah College of Art and Design.

Indoors: One enters through a private street door and climbs a flight of marble stairs to reach the second-floor unit. French doors lead into a living room with original heart-pine floorboards, a fireplace with a neo-Classical mantel and a second set of French doors opening to a covered balcony overlooking East Charlton Street. The balcony, which is framed by a brick arch, can also be entered from an adjacent kitchen and dining area with wood cabinets, marble countertops and wood knobs and pulls. (As specified by the apartment’s decorator, Kelly Woodton of New Jersey, the gray-and-green palette was meant to evoke grand country-house kitchens from the Victorian and Edwardian eras.)

On the opposite side of the foyer is a double closet with a stacked washer and dryer, followed by the bedroom wing. The guest room, staged here as an office, has heart-pine floors, marine-blue walls with white trimming and three sash windows with shutters. The guest bathroom, which opens from the hall, includes a tiled tub-and-shower combination. The primary bedroom is white with wood floors and includes a private balcony overlooking Troup Square, an en suite bathroom with a walk-in shower faced in glossy dark-green subway tile and a windowed, walk-in closet.

It’s a property that offers a unique open floor plan—plus a hot tub with a view.“It was a Methodist church located in a historic little area of St. … END_OF_DOCUMENT_TOKEN_TO_BE_REPLACED