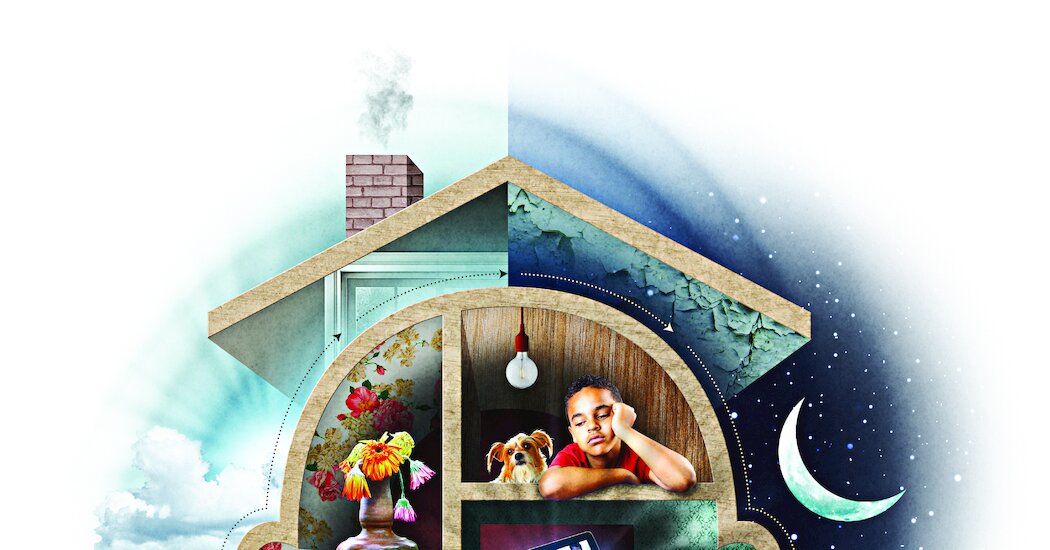 One spring more than 200 years ago, Xavier de Maistre, a well-to-do, well-read French army officer and balloon enthusiast, was sentenced to house arrest for a dueling incident. He spent 42 days in his bedroom, in a modest apartment on the top floor of a building in Turin, and wrote a whimsical travelogue of his time there called “A Journey Around My Room.”

Wearing his “traveling clothes” — a bathrobe and pajamas — he visited his comfy sofa, his desk, his cheerful pink-and-white bed (colors he recommended to his readers because they compelled him to wake up happy) and his memories, seeing all of these elements with fresh eyes. (He wrote a sequel, “Nocturnal Expedition Around My Room,” in which he journeyed by looking out his window at the night sky.) Like the Pevensie children, who stumbled into Narnia through an old wardrobe in a spare room, M. de Maistre found an entire world in a confined interior space, and pioneered, as Alain de Botton wrote in the forward to a reissue of both stories, a novel mode of experience: room travel.

During this long year of house arrest, our relationships to our homes, like M. de Maistre’s to his bedroom, have been altered in profound and ridiculous ways. Our homes have been a refuge and a prison, often filled with too many people (and their newly adopted shelter dogs) doing things the spaces were never meant for, like school, work and physical activity. (The 19th-century rural model — the home as the site of leisure and production — has been reprised, although the activity may be happening in a cramped apartment instead of an airy farmhouse.)

Partners and children have stayed put, which has been both a boon and a corrosive to family life, depending on the family — or the day. Or maybe the home has been empty save for one human, and the place that was intended to be a launching pad or a respite from the energy of public life may have felt like solitary confinement. And that’s if you’re lucky.

despite moratoriums in many states, the idea of home is evanescent, a relationship not just fraught, but unattainable, as even basic shelter becomes a luxury — and more completely out of reach.

After so many months confined to our homes, we asked those who think about place — architects, urban policy experts, novelists — how our relationships with our homes have changed, and what home means to them. (Their responses have been edited for clarity and condensed.)

rescheduled for May, with a title — “How Will We Live Together?” — made more poignant and urgent by the delay.

Our homes now operate 24/7. Before, they used to take a break from us during working hours. We are paying more attention to them, but we are also wearing them out. They are tired of us. We need to be gentler with them.

“Room,” her 2010 novel about a space that was horribly more than its four walls, she designed it on the Ikea website, choosing the second-cheapest item on every page because, as she said, Jack and Ma’s captor, Old Nick, was (among other shortcomings) deeply cheap, but thinking long-term. (The book was made into a feature film in 2015.) Now that Ms. Donoghue and her family have been living in a less dystopic version of that world, its lessons have been an inspiration. Not so much about the furniture placement — Ms. Donoghue lives with her female partner and two teenagers in London, Ontario, in Canada, with “plenty of house, a yard and a deck and a front porch” — but more about the fluidity of the space and the relationship between parent and child.

Anytime Ma could say yes to Jack, she did. I didn’t want theirs to be a life of unnecessary rules. I tried to make it flexible, so she was able to say yes to running a race, and put the table on the bed.

I think a lot of parents have adopted that mind-set. What can we say yes to? My top priority has been I don’t want to be quarreling with the kids, so I have become a much more laid-back mom. I suspended my rules about screen time. They were living such a confined life, and everything fun was canceled. If my daughter wanted to watch “The Good Place” while doing math, then go for it. And “The Good Place” is like a philosophy course.

Ideas and Action, focused on civic work devoted to racial reconciliation and wealth building. One project in particular, with the Albina Vision Trust in Portland, Oregon, is imagining alternative forms of development, ownership and governance on land taken away from the area’s Black community.

As the line between office and home was erased, Mr. Norman said he felt both liberated (from the commute) and stifled (without it). But the experience also showed the promise, he said, of ideas urban planners have had for years: How cities with less rigid, more inclusive zoning and a revenue model less dependent on property ownership might make for more just, affordable and humane communities.

For people in planning and creative place making, this is the flexibility we’ve always been fighting for. Of course, we didn’t want it to happen this way.

Sometimes I joke with colleagues on Zoom that we’re all doing something illegal. We’re in single-family houses that specifically prohibit businesses, specifically prohibit all these other things, and here we are. Those rules were put in place assuming the need to impose segregation of uses, races and family types. We are living with the legacy of exclusionary zoning and racial covenants.

“Nomadland: Surviving America in the Twenty-First Century,” a 2017 book that told the stories of older Americans battling economic hardship and precarious housing by living in vans and chasing seasonal work — and finding a kind of liberation in doing so. (It is now, of course, a critically acclaimed movie starring Frances McDormand, with multiple Oscar nominations.) For the book, Ms. Bruder traveled with her subjects in a white GMC Vandura she named Halen, after the 1980s hair band, a vehicle that soon become a cherished home. This past year, Halen has been stranded in a friend’s backyard in Reno, N.V., where Ms. Bruder, who lives in Brooklyn, was scheduled to speak last spring. She had hoped to reunite with it then, but the pandemic canceled those plans. Nonetheless, she took to the road in a 10-year-old Prius she kitted out with an Igloo cooler that plugs into the cigarette-lighter socket, camping gear and a five-gallon bucket of sanitary necessities, including gloves, masks, sanitizer, wipes and “the feminine accessory of the season,” she said, “a She Wee, a.k.a. pee funnel,” so as to avoid public restrooms.

The more I stayed home, the less at home I felt. No out-of-town guests came to couch-surf. No communal meals were shared at the long oak table I built for that purpose. Sirens and helicopters made it hard to sleep.

New York City had become a centrifuge, spitting friends out in faraway places. So I decided to hit the road, loading up my Prius like a space capsule with all the necessities to sustain human life.

Soon, home was a tent — on a Maine porch, in a New Hampshire backyard — for socially distant visits with friends. Or it was staying in an Asheville basement, hanging out with family in the carport. Or it was a spartan KOA cabin in Virginia, after it got aired out and the door handles were Cloroxed. There’s a kind of refuge in motion. — JESSICA BRUDER

McMansion Hell blog, which chronicles the excesses of that housing type. She does not live in a McMansion, or even a house, but a two-bedroom apartment in Chicago, where she has been confined with relative ease, thinking about privacy and consent, and how the open office has migrated to the Zoom-ified house.

Jeremiah’s Vanishing New York, his blog and a 2017 book of the same name, have been a kind of diary of homesickness. Yet the events of the last year have mostly alleviated those feelings for him.

“Evicted: Poverty and Profit in the American City,” a heartbreaking tour of unstable housing, Matthew Desmond, a sociologist, moved into a mobile home park and a rooming house in Milwaukee, chronicling firsthand the violence of eviction, an experience that irrevocably altered his relationship with the idea of home. Mr. Desmond now teaches at Princeton University and runs the school’s Eviction Lab, which tracks evictions across the country; he lives with his wife and two small children in a house nearby.

DONETSK REGION, Ukraine — Between the cracks of mortar fire and the metallic bangs of Russian self-detonating mines, Yurii, a Ukrainian Army medic, … END_OF_DOCUMENT_TOKEN_TO_BE_REPLACED

SAN FRANCISCO — Cleve Jones has lived in the Castro neighborhood for nearly 50 years, almost from the day he graduated from high school in Phoenix and … END_OF_DOCUMENT_TOKEN_TO_BE_REPLACED