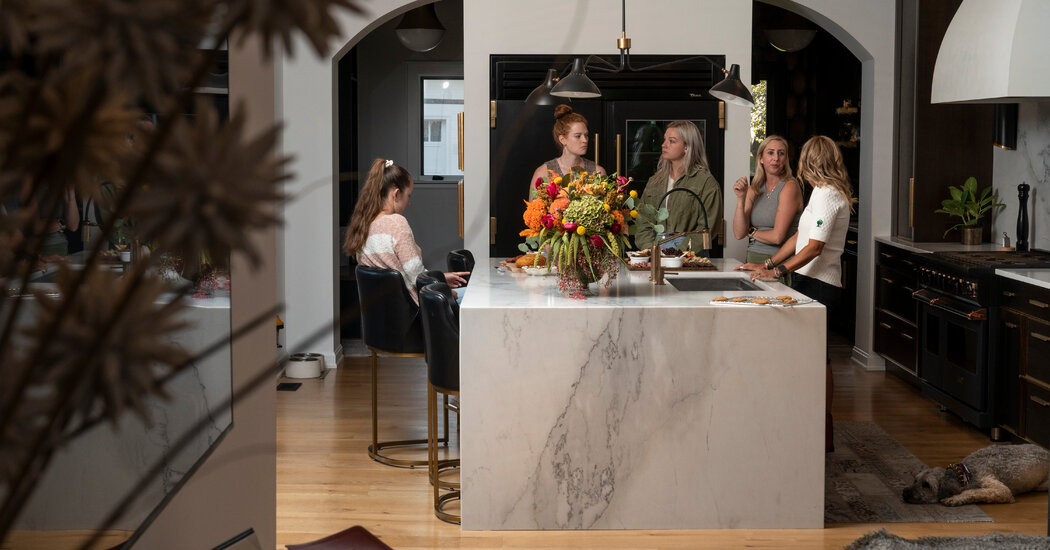 In May, about 30 eighth graders gathered around the large island in an Indianapolis kitchen to belt out “The sun’ll come out tomorrow” to celebrate a successful school production of “Annie.” About 60 parents cheered them on, spilling out onto the patio.

For Jayme Moss, the host who opened her home to the guests, the moment marked another milestone: not a single dirty plate, tray or bowl tarnished the photos or videos. The sizable mess that comes from serving pasta and cake to a crowd of 90 was hidden in her back kitchen, a smaller room tucked behind the main one.

“Normally you take that picture or video and there would be stuff all over the kitchen,” said Ms. Moss, 49. Instead, “everything was in the back.”

Khloe Kardashian’s backlit beige pantry, a shrine to packaged goods. The expectations are now high for a room that once housed brooms and large packages from Costco. “People want to walk in and shop their pantry,” Ms. Clark, the homebuilder, said.

vacation rental company, spent $2 million renovating their 5,000-square-foot home on the Jersey Shore, removing a second staircase to make room for the back kitchen, which they call the “messy kitchen.” They call the front kitchen, which opens to the dining area and overlooks the water, the “pretty kitchen.” The pretty kitchen has an island with a waterfall countertop, sleek cabinets and a gas range. The messy one has a second refrigerator, a second dishwasher, an electric range, a microwave and all the countertop appliances. The property is listed for $5.5 million.

The two kitchens never felt like separate spaces to the Barrys, but instead like work stations that flowed together. Last spring, the couple had friends over for a Mediterranean night with chicken, lamb and beef kebabs. “Some people were cutting peppers and zucchini, others were making salads,” Mr. Barry, 60, said. “Everyone was just kind of working as a team, but was able to spread out.”

When the couple’s children were still living at home, the family of five would often find themselves cooking in tandem, moving between rooms from the air fryer to the griddle to the stove, and pulling food from the refrigerators in both spaces.

“If you cook and you enjoy cooking and you hate clutter, it’s kind of the perfect thing,” Ms. Barry said, adding, “For us, as a family that cooks together, it’s a really important part of our life.”

Soon after Herschel Walker, the former football star, announced he would run for U.S. Senate in Georgia as a Republican, his son Christian appeared … END_OF_DOCUMENT_TOKEN_TO_BE_REPLACED

SpaceX launched four people to the International Space Station from Florida on Wednesday, as Elon Musk's company keeps up a steady pace of crewed … END_OF_DOCUMENT_TOKEN_TO_BE_REPLACED