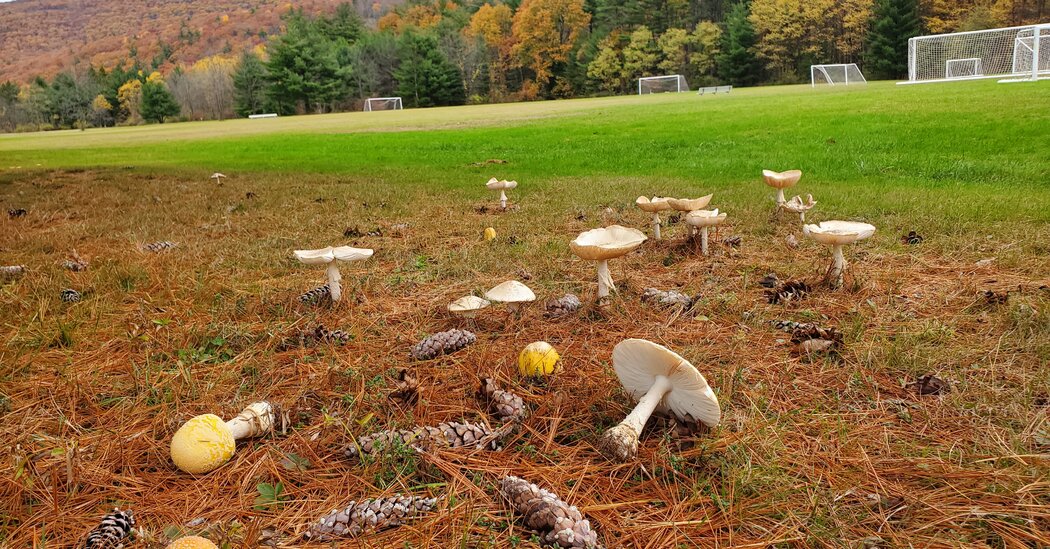 They appear spontaneously, or so it seems, popping up out of the mulch, rising in a single spot on the lawn or bursting from between the pathway pavers like little marshmallows. But there is an intricate master plan at work, just not one to which most gardeners are privy.

What are the mushrooms in our gardens trying to tell us — and would you be surprised to learn it’s mostly good news?

“Without the fungi we wouldn’t have soil, at least not the way we know it now,” said John Michelotti, of Catskill Fungi in Big Indian, N.Y., a family farm on land his great-great-grandfather bought, where Mr. Michelotti spent his childhood summers. “Their filamentous underground mycelia are essential for the nutrient cycling and balance of our soils, plants, microbial life — and ecosystems as a whole.”

‘Fantastic Fungi’ if you want to really appreciate the puffballs in your lawn,” said Mr. Michelotti, who has a walk-on in the documentary — and a favorite recipe for puffball piccata.

Again: Enough with the eradication efforts. First, you can’t eradicate them — most of the fungi’s life is unseen, below ground, and continues even if the fruiting bodies are removed. And “if you pick them and toss them somewhere, or mow them, you’re actually helping spread their spores,” Mr. Michelotti said.

Edible mushroom cultivation — accomplished by inoculating logs with shiitake spawn or growing oyster mushrooms in coffee grounds on the kitchen counter — has soared in popularity.

Although we are already unintentionally growing mushrooms in our yards, Mr. Michelotti nudges us to try our hand at deliberately growing delicious workhorses like wine cap king Stropharia (Stropharia rugosoannulata) in mulched paths or beds. The annual almond Agaricus could be cultivated in finished compost, alongside squash vines, or you could inoculate a compost heap or undisturbed garden bed with blewits (Clitocybe).

Sources of spawn like Field & Forest Products and Mushroom Mountain offer extensive selections with detailed how-to instructions on each species.

Gary Lincoff, who died in 2018. Best known as the author of the “National Audubon Society Field Guide to North American Mushrooms,” Mr. Lincoff taught at the New York Botanical Garden for more than 40 years. In a project that ran from 2010 until his death, he recorded more than 100 species there, each living otherwise unheralded among that world-class plant collection.

Mr. Michelotti became interested in mushrooms through cooking, and then foraging. It was Mr. Lincoff who led the first event he attended, and Mr. Michelotti urges each of us to go on a guided walk or check out a local club meeting. (The North American Mycological Association website has a club directory.)

If you need more encouragement, The Mushroom Expert website by Michael Kuo is a go-to, as are the classic books “Mycelium Running: How Mushrooms Can Help Save the World” by Paul Stamets and “Mushrooms of the Northeastern United States and Eastern Canada” by Timothy J. Baroni. Doug Bierend’s “In Search of Mycotopia: Citizen Science, Fungi Fanatics, and the Untapped Potential of Mushrooms” was recently published. And if you prefer memoir-style mycological inspiration, try Long Litt Woon’s “The Way Through the Woods: On Mushrooms and Mourning.”

As for Mr. Michelotti’s guided walks, they’re less “Is it edible?” than Fungi 101. He covers the interconnection of nature through mushroom morphology, ecological roles, fungi in history and in current medicine and science. And he always finds something to add a dose of the “wow” factor.

A few years ago, he was scheduled to lead a walk in woods he had never visited. “Don’t you want to come early to find the good spots?” the organizer asked him. No, he replied, he didn’t need to plot an advance route.

AUSTIN, Texas--(BUSINESS WIRE)--As the first multifamily management company to be recognized in the Public Relations and Marketing Excellence Awards, … END_OF_DOCUMENT_TOKEN_TO_BE_REPLACED

There have been whispers of cooling housing and rental prices in the San Francisco Bay Area, but that hasn't yet translated into practical, noticeable … END_OF_DOCUMENT_TOKEN_TO_BE_REPLACED

Cars pass in Independence Square at twilight in Kyiv, Ukraine, Monday, Oct. 31, 2022. Rolling ... [+] blackouts are increasing across Ukraine as the … END_OF_DOCUMENT_TOKEN_TO_BE_REPLACED