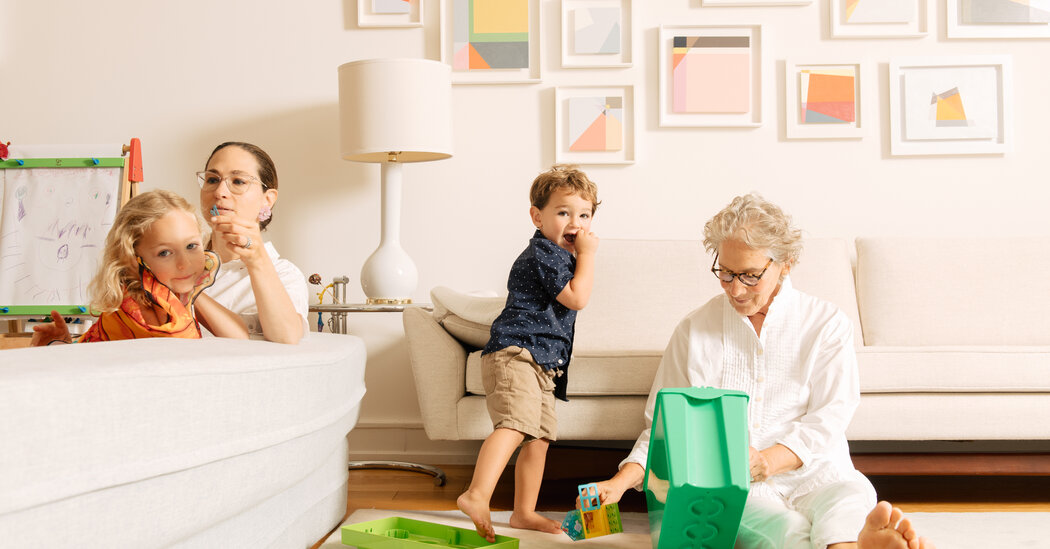 In a city with no shortage of unusual real estate stories, Adele Geffen Eil and Judith Seligson have created one of the more unexpected living arrangements in New York.

The 70-somethings first met in the 1970s — initially friendly, but not necessarily friends.

Ms. Eil, a lawyer, met Ms. Seligson because she worked with Ms. Seligson’s sister. They got together occasionally over the years, and then the women had a good reason to become close friends: Their children fell in love, got married and had two kids, Leah, now 4, and Gabriel, 2.

an abstract painter, and Allan Greenberg, her architect husband, were selling their previous New York apartment, leaving them with their main residence in Alexandria, Va. Yet they still wanted to see their daughter and grandchildren regularly.

Ms. Eil and her husband, Charles Eil, who live in Providence, R.I., were also regularly visiting Andrew, a consultant who works on issues around climate change, and another son who lives in Brooklyn with his family. But they had no place to stay in the city. Then Hannah, a journalist who has contributed to The Times, mentioned that an apartment on her floor was up for rent. The couples signed a two-year lease.

Did they have reservations that the whole thing might blow up and start a family feud?

“Every bedroom has an en suite bathroom,” Ms. Eil said. “You don’t have to pay attention to anybody else who’s here.”

Added Dr. Eil, a physician: “You couldn’t have a better layout for independence and privacy.”

Ms. Seligson said of the four: “Since Hannah and Andrew have been married, we’ve gradually become closer.”

But are they too close for comfort to their children? In-laws typically have one of the most fraught family dynamics. In this case, two sets of in-laws live down the hall.

“People’s heads spin when I tell them my parents and my husbands’ parents share an apartment,” Hannah said. The inevitable question she gets from friends: “So how does that work?”

In the beginning, Andrew said, he tried to formalize the arrangement in an effort to smoothly navigate the logistics. Would he and Hannah handle the apartment maintenance for their parents in their absence? Pay for internet service? (Yes and yes, it turned out.)

“I laid it all out,” he said, “in this very antiseptic and bureaucratic email, and my parents were just mortified. The irony is I sent it to avoid conflict. Instead, I created conflict.”

“The conflict happened before we all lived together,” Hannah said. “I would say that was maybe the biggest tension point. After those brutal first months of the pandemic, there was just so much gratitude to be able to see each other and visit, that diffused any potential conflicts.”

Growing up close to her own grandparents, Hannah wanted the same for her children. “This has sort of always been my dream,” she said. And, of course, she and Andrew benefit from all the babysitting and extra spillover space.

But even though Hannah and Andrew now share a bedroom wall with her parents, with only a trash chute and elevators separating the apartments, she clarified that the closeness had its limits.

“I didn’t want them to move into my apartment,” she said with a look of mock horror. “It was having a place where we can all convene. But also be separate.”

Inside the in-law suite, separation is also helpful: Ms. Seligson, 72, and Mr. Greenberg, 84, have the bigger share of the apartment with two bedrooms, while the Eils, both 75, have the third bedroom. A common living area with an open kitchen divides the bedroom wings.

Decorating the place in a way that was mutually agreeable was not a problem. Mostly, Mr. Greenberg and Ms. Seligson brought their modern furniture from their old apartment. Small, abstract canvases by Ms. Seligson adorn the living room wall, and a large rug designed after one of her geometric works is the room’s centerpiece. Ms. Seligson and Ms. Eil spent a day together hanging the paintings and bonding over the process.

As for the Eils, “I have my Fiestaware plate and Tizio lamps,” Ms. Eil said. “I don’t feel we’re in Judy and Allan’s apartment because their stuff is here. I have a real pride in how the pictures are arranged.”

They also arrange themselves.

“I’m tentative,” with the arrangement of objects, Ms. Seligson said. “I’m always asking, ‘Are you OK where I put that?’”

Ms. Eil interjected: “Judy is a big reorganizer, though. Every time I come, things are in a different place. I don’t complain. I’m so grateful to have the apartment.”

OK, so they are human, with quirks and tensions. It helps that both couples are rarely here at the same time. Usually it’s some combination of the four, and quite often it may just be Ms. Eil or Ms. Seligson alone, or the Eils visiting on a weekend when Dr. Eil is off work.

But 16A is a hub for the whole family. The first big gathering in the apartment was for the bris of Gabriel, in March 2020. Then the Covid-19 pandemic hit. The in-laws barely used the apartment for nine months, but having it allowed the grandparents the ability to see their grandchildren at first individually and later as a group. In the days before the vaccine, the building issued a rule that only residents could enter. They were, in fact, residents.

Two years later, the children’s play table and toys scattered around suggest that the boundary between 16A and 16G is porous. Indeed, the children and grandchildren pop into 16A so often that Ms. Seligson has taken to calling it “the annex.”

“This is the best it’s looked in a long time,” Dr. Eil chuckled.

Ms. Seligson smiled ruefully. “It won’t look like this in five hours. Wait until Gabriel comes.”

SHERMAN OAKS, Calif.--(BUSINESS WIRE)--When it comes to choosing a property management company, the size of a company often becomes a sticking point … END_OF_DOCUMENT_TOKEN_TO_BE_REPLACED

An alternative way to get Original Medicare coverage, Medicare Advantage plans offer coverage that is equal to or greater than that of Medicare Parts … END_OF_DOCUMENT_TOKEN_TO_BE_REPLACED