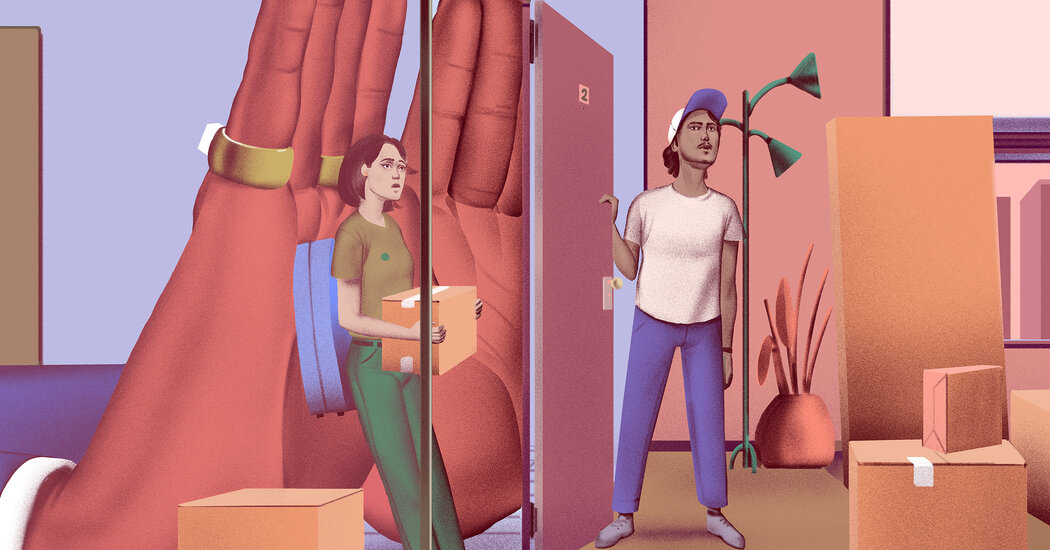 Xin-rui Lee didn’t initially want to live with her partner.

They’d been together for a year and eight months, but after a seven-week trial run of living together on a recent trip to Mexico City, Ms. Lee recalled leaving with a strong feeling that she did not want to make the situation permanent.

“Ultimately, I felt that I was not comfortable enough living with a partner to truly be my dumbest self at times,” Ms. Lee, a 26-year-old communications specialist, said. “I took an edible one night because I was tired from work, but the whole time, he was there, and I just didn’t want to be perceived at all. I was so self-conscious.”

Her desire to live alone slowly shifted as the realities of the current rental market set in. Her landlord announced that her current rent would be going up by $300, and after a quick scan of what was available online, Ms. Lee thought moving in with her partner might be the right choice after all. So the two began their apartment hunt together in hopes of finding a new place by the end of the summer.

In May, the median rent in Manhattan reached a record-breaking level of $4,000, the brokerage Douglas Elliman reported. Nationwide, asking rents were up 15 percent in May from a year earlier, according to the real estate brokerage Redfin.

25 percent in the past year. Mr. Yeung won the affordable housing lottery, and the two were planning to split a one-bedroom apartment for $2,700 a month starting in July. They dreamed of purchasing a Noguchi coffee table and designing a home of their own.

“We would have liked to have the flexibility to at least wait until the one-year benchmark in our relationship,” Mr. Yeung said. “But with this rental market and just how much we wanted to stay in this neighborhood, we thought it makes so much more sense to live together.”

But since his initial interview with The New York Times, Mr. Yeung and his partner decided to end things.

“That pressure of that firm date of moving in together really made us re-evaluate whether this is a good thing right now,” Mr. Yeung said. “It put a lot of stress on us to make things work.”

Now, Mr. Yeung will move into the one-bedroom on his own, and without someone to share the rent with, he’s planning to budget his income meticulously. “Less takeout, maybe eating out just one day a week and no coffee ordering,” he said. “I’m going to try and cut out all those everyday luxuries just to make that rent.” He’s also kissing that Noguchi coffee table goodbye.

AUSTIN, Texas--(BUSINESS WIRE)--As the first multifamily management company to be recognized in the Public Relations and Marketing Excellence Awards, … END_OF_DOCUMENT_TOKEN_TO_BE_REPLACED

There have been whispers of cooling housing and rental prices in the San Francisco Bay Area, but that hasn't yet translated into practical, noticeable … END_OF_DOCUMENT_TOKEN_TO_BE_REPLACED

Cars pass in Independence Square at twilight in Kyiv, Ukraine, Monday, Oct. 31, 2022. Rolling ... [+] blackouts are increasing across Ukraine as the … END_OF_DOCUMENT_TOKEN_TO_BE_REPLACED