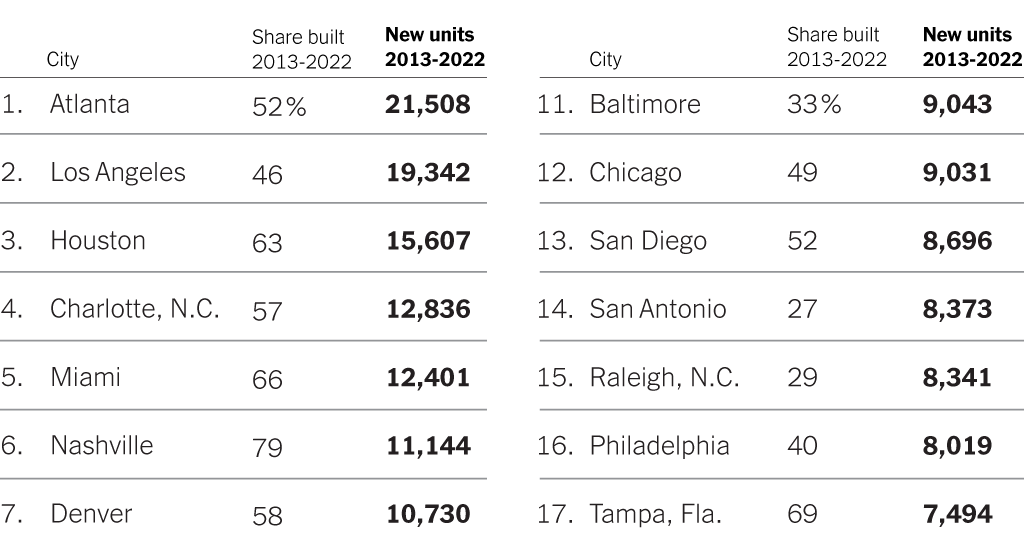 Despite the rumors and any presidential confusion, the pandemic isn’t over. Nevertheless, the depopulated American downtowns of 2020 and 2021 are bouncing back, with city dwellers returning from their country retreats or parents’ houses to fill up restaurants, concerts, parks, public transit — and rental units.

That makes things hard for apartment hunters. Pandemic deals are long gone, replaced by record-high rents, with added competition from would-be buyers thrown back into the rental market by high prices, rising interest rates and a shortage of homes for sale. Simply put, housing is expensive and there isn’t enough of it.

StorageCafe found that about 391,000 rental units have been completed since 2013 in the downtown areas of the 100 largest U.S. cities, making up more than 37 percent of all downtown apartments nationally. In some quickly expanding Southern cities, much larger gains were seen. In Nashville and St. Petersburg, Fla., for example, over 70 percent of apartments were added since 2013. Miami and Tampa, Fla. were close, with new units making up 69 and 66 percent of their downtown rentals.

Jersey City and Downtown Brooklyn ranked eighth and ninth, with each adding nearly 20,000 units since 2013.

This week’s chart, based on StorageCafe’s research, shows the top 20 U.S. cities as measured by the number of new rental units built between 2013 and 2022.

AUSTIN, Texas--(BUSINESS WIRE)--As the first multifamily management company to be recognized in the Public Relations and Marketing Excellence Awards, … END_OF_DOCUMENT_TOKEN_TO_BE_REPLACED

There have been whispers of cooling housing and rental prices in the San Francisco Bay Area, but that hasn't yet translated into practical, noticeable … END_OF_DOCUMENT_TOKEN_TO_BE_REPLACED

Cars pass in Independence Square at twilight in Kyiv, Ukraine, Monday, Oct. 31, 2022. Rolling ... [+] blackouts are increasing across Ukraine as the … END_OF_DOCUMENT_TOKEN_TO_BE_REPLACED