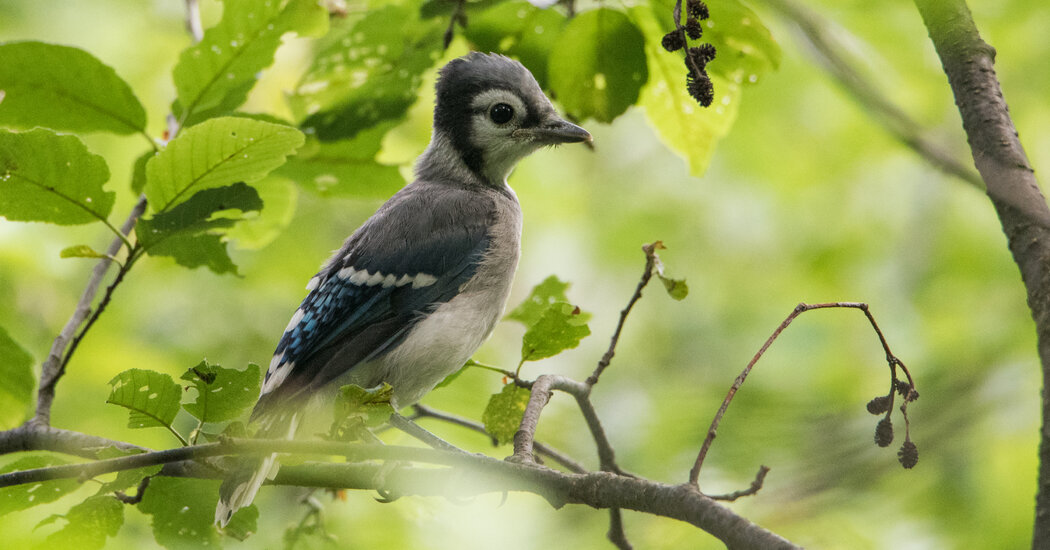 I am chasing weeds, crawling around in the cool, moist earth, in pursuit of thuggish green rosettes of garlic mustard. Not 20 feet away, another kind of chase is on, as one mourning dove pursues another with what looks like a vengeance.

The soil, and the days, are not all that’s heating up. So is breeding season, the birds are showing me, each species in its own time and style.

A male Northern cardinal close by is less pushy than the mourning dove. In a gesture that, through the filter of human perception, could be described as tender, he offers a female a sunflower seed from the ground. She accepts.

New York State’s third Breeding Bird Atlas. Like parallel surveys in many other states, this is a five-year-long undertaking conducted every 20 years to give conservation decision makers the information they need about bird populations and locations.

it connects us to the wider world?

eBird app, you quickly realize the truth of that, even if you’re accustomed to counting birds and making lists to share on eBird, the portal managed by Cornell Lab of Ornithology and used by hundreds of thousands of birders worldwide. When you’re making lists — 11 goldfinches, six white-throated sparrows, four blue jays — the presence of the birds is the key criterion.

a portal on eBird, for the first time, rather than using paper checklists — includes who the birds are and what breeding behavior they’re up to, along with the usual when and where of any sighting.

23 behavior codes to choose from, to qualify each entry recorded.

For example: C, for courtship behavior. That’s how I marked my cardinals and that insistent mourning dove chasing his target. A week later, I checked P, for pair (as in, they’d paired up), when I saw two doves, side by side, preening — nuzzling and almost nibbling the feathers at each other’s head and neck.

There has also been a lot of S, for singing bird, going on. That includes the male Eastern Phoebe who arrived in the second half of March and soon began to emphatically, incessantly speak his own name. (The free app Merlin, and another from Audubon, can help with song identification.) More melodious early voices have included the cardinal (the female sings, too), bluebirds and the Carolina wren.

moth caterpillars, in particular, the preferred baby food. But now, as bits of garden “debris” fly by, being upcycled into nurseries, it is almost as if the practice is having an unintended bonus. (Here are some additional tips for making a bird-friendly garden.)

Local officials and housing advocates worry about what the damaged housing stock will mean for people with low wages or fixed incomes. In interviews, … END_OF_DOCUMENT_TOKEN_TO_BE_REPLACED