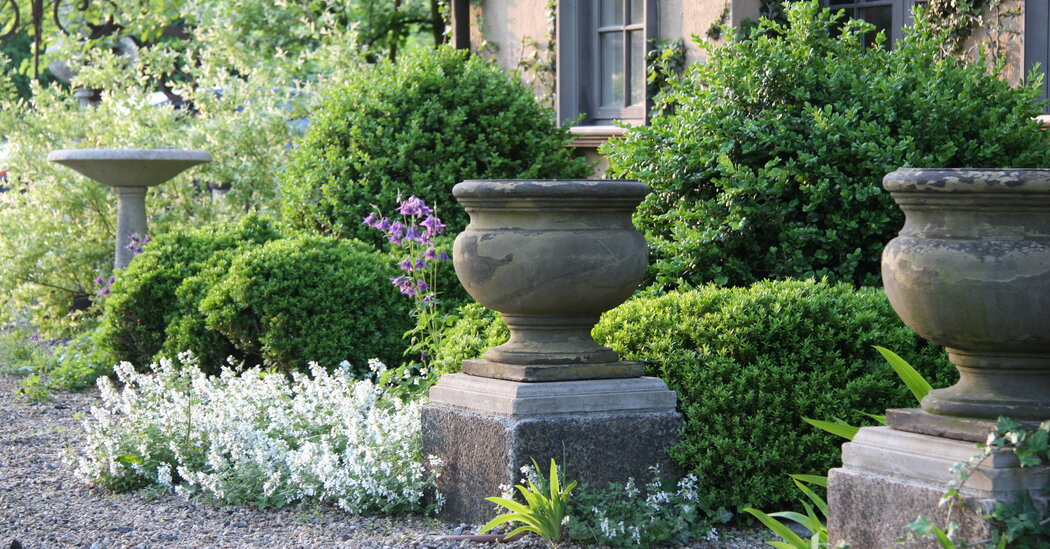 It’s time for boxwood-loving gardeners to learn the abbreviation B.M.P. — best management practices — and get with the program. Boxwood needs our informed attention and care to do its job as the indispensable landscape element it has become since the first Buxus were planted in the United States in the mid-17th century.

It is hard to think of another plant that lends such year-round structure to a design as boxwood, defining spaces with its evergreen presence, while holding little interest for hungry deer — another big plus.

But in the last decade or so, the fungal pathogen Calonectria pseudonaviculata, which causes boxwood blight, has tarnished this garden mainstay and important nursery crop. The disease — first identified in the United States in 2011 and recorded in at least 30 states and the District of Columbia since then — has triggered a surge of research into how to control it, and into the possibility of breeding resistance into boxwood genetics.

AJF Design, the challenge underscores a feeling she was having years before the arrival of the disease. The conventional wisdom of boxwood maintenance — starting with regular, drastic shearing to within an inch of the plant’s life — didn’t seem to her to match boxwood’s needs.

“This plant, historically, has been mistreated,” said Ms. Filippone, who in March became president of the American Boxwood Society, an organization of enthusiasts, from nursery professionals to home growers. “We baby this plant to death. Plants are overwatered, over-fertilized and allowed only a little crust of leaves to photosynthesize with.”

Saunders Brothers, called “a new mind-set of the boxwood gardener.” His Virginia-based family business, a wholesale nursery that is more than a century old, has made boxwood its “signature crop” since around 1950, he said. Today, that means focusing on breeding for more resilience against blight and boxwood leafminer, an insect pest.

Saunders Brothers has been actively selecting among cultivars for blight resistance since 2011, when the nursery had about 150 varieties in its collection to evaluate. The gardeners there began making crosses of the more resistant varieties, and now the resulting 5,000 unique seedlings need to be screened for disease and pest resistance. The process continues, but two cultivars have been introduced so far: NewGen Independence and NewGen Freedom.

Ms. Filippone has long appreciated and shown off “the nuances of boxwood,” its range of shapes and even variations in leaf color and texture among cultivars.

BoxwoodHealth.org. “The taller a plant is and the farther from the ground, the more air it’s catching and the better it looks.”

Some tactics are simple (and reminiscent of tomato best practices): Don’t water overhead; don’t work among plants when the foliage is wet.

And don’t forget to mulch: Research by Chuanxue Hong, a professor of plant pathology at Virginia Tech, has shown that a mulch layer is up to 97 percent effective at blocking spores that would otherwise splash up onto plants.

“A leaf that might have fallen off an infected plant the year before can’t come back and haunt it again if it’s buried,” said Ms. Daughtrey, who is looking forward to a rapid test for blight that is in development — and to the fruit of collaborative efforts to build a better boxwood today.

DALLAS — The rollback of abortion rights has been received by many American women with a sense of shock and fear, and warnings about an ominous … END_OF_DOCUMENT_TOKEN_TO_BE_REPLACED

The poshest place in California's Coachella Valley is The Madison Club. This exclusive gated community in La Quinta is where A-listers and tycoons … END_OF_DOCUMENT_TOKEN_TO_BE_REPLACED