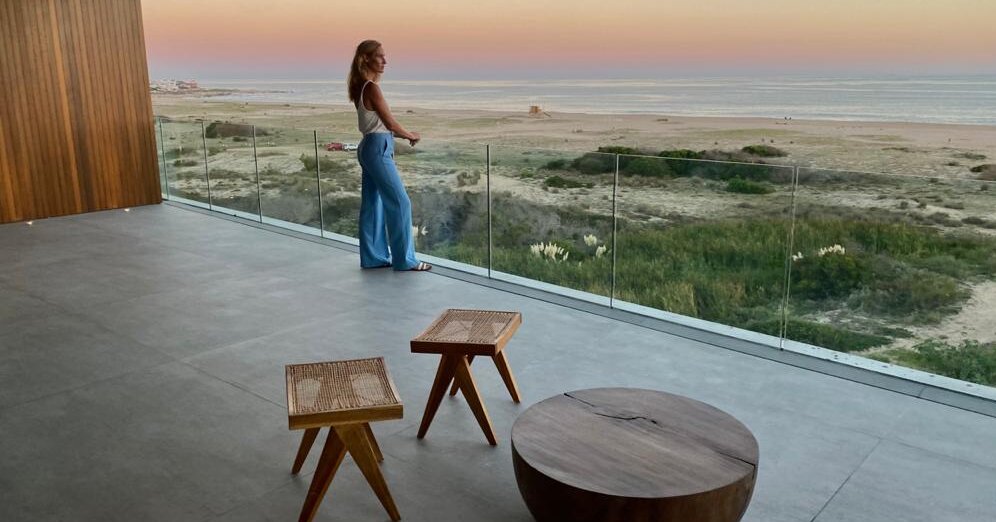 For Ingo Schirrmann, a television producer from Germany, a hastily planned New Year’s vacation in Uruguay turned into a new lifestyle. In December 2012, almost on a whim, he canceled his tickets to Courchevel, France, and flew to Punta del Este, on the Uruguayan coast, instead. The beaches of South America sounded more exotic, not to mention warmer, than the slopes of the French Alps, he recalled.

He headed straight to José Ignacio, a bohemian-chic peninsula about 20 miles east of downtown Punta, and had a grand time — grand enough to buy a plot of land near the ocean and eventually build a modernist house there, designed by the acclaimed local architect Martín Gómez. Mr. Schirrmann, who was based in Hamburg, intended to use the house during the Southern Hemisphere’s summer, but as he began spending time in José Ignacio, he was taken with its slow-going, friendly atmosphere. The pandemic cemented his decision to make it his primary residence.

“Five years ago, if you told me I’d be living in a small village I wouldn’t have believed it,” he said. “What makes José Ignacio special is the people who come here. It’s easy to connect with like-minded people from different parts of the world, and it’s all super laid back.”

La Huella, that invariably delights patrons with its fire-grilled seafood and weathered-wood decor. There are gravel streets dotted with Instagram-friendly boutiques. Most importantly, there are vast beaches, open skies, and no reminders of the stresses of modern life. The proximity to Punta del Este, a larger, more urban resort, is both a convenience and an afterthought.

“The coast of Uruguay is an international meeting point,” said Alejandro Perazzo, a real estate agent affiliated with Sotheby’s International Realty. “For buyers from abroad, this country has a lot of benefits relative to the rest of the region. The rules of the game don’t change here, no matter who’s in government, and this predictability is attractive. It’s also safe.”

Mr. Perazzo was comparing Uruguay to neighbors Brazil and Argentina, two countries with a history of political and economic upheavals. Argentines and Brazilians have been summering in Punta del Este and José Ignacio for decades. But lately, given Uruguay’s stability and the announcement of tax benefits for foreign investors, many of them are staying for longer stretches of time. (Requests for permanent residency in Uruguay by Argentines, for example, tripled last year to nearly 10,000 requests, according to local news media.)

And so the real estate market has been abuzz, especially when it comes to luxury residences with inspiring views. In and around José Ignacio, a series of upscale (yet fittingly understated) waterfront developments are underway.

the Colette, a waterfront condominium with a minimalist concrete-and-glass aesthetic. To blend in with the pastoral surroundings — grassy dunes, pine groves and stonewalled chalets — Mr. Álvarez Castillo designed four low-rise buildings separated by leafy courtyards. There are 42 units, starting at $1.3 million for a 1,600-square-foot three-bedroom, overlooking a seemingly endless beach.

Mr. Álvarez Castillo also splurged on high-quality materials like Italian marble, German fixtures and Brazilian lapacho wood, yet he exercised some restraint when planning the building’s amenities. His idea was to keep expenses at less than $2,000 a month per unit (there is an outdoor pool and a small gym, but not much else).

Fendi Château Residences, a complex of four buildings, tops out at 27 stories), José Ignacio and its vicinities have strict building codes aimed at preserving the environment as well as the rural identity of the area (buildings cannot exceed 20 feet). At a time when people around the world have been rethinking city living, the promise of everlasting rusticity coupled with good taste is highly appealing — and it comes at a price.

Mr. Gómez recently completed a 5,000-square-foot residence built right on the sand dunes of Playa Mansa, known for its spectacular sunsets. Including the land, it cost about $4 million.

There are still some opportunities to be found. In La Juanita, a rugged, slowly developing neighborhood just a mile west of the village, plots situated about 900 feet away from the beach cost between $30 and $40 a square foot.

But many buyers, especially foreigners, may not be keen on overlooking a ground-up construction or taking care of home-maintenance logistics. The upcoming Costa Garzón offers both custom-designed homes and condominium-style services like housekeeping, landscaping and more. Conceived by Alejandro Bulgheroni, an Argentine energy magnate who owns a nearby championship golf course and an award-winning winery, Costa Garzón is poised to be the most exclusive development in the area, if not the entire country.

Set right on José Ignacio’s Playa Brava and just a five-minute drive away from the center of the village, this collection of oceanside plots — ranging from 12,000 to 16,000 square feet and starting at $1.7 million — come with an array of extras, including membership to the Garzón Tajamares Golf Club and the Bodega Garzón wine club (where members can create their own wines using varietals from any one of Mr. Bulgheroni’s vineyards in Uruguay, California, Italy, France and Australia.). There will be a beach house with a sit-down restaurant as well as a toes-in-the-sand dining option called El Chiringuito de Mallmann (named for its famed Argentine chef, Francis Mallmann), which had its soft opening in 2020. To build their homes, buyers can hire Costa Garzón’s team or bring their own architect, as long as the design adheres to certain aesthetic guidelines.

While Mr. Bulgheroni caters unmistakably to the jet set, he’s aware of the importance of respecting the pastoral style of the area. “I think this place will continue to attract more people, but it was never meant for people who are formal; it’s relaxed and it’s bucolic.”

Editor’s Note: This story is part of As Equals, CNN’s ongoing series on gender inequality. For information about how the series is funded and more, … END_OF_DOCUMENT_TOKEN_TO_BE_REPLACED

IdentityForce, a service from the credit bureau TransUnion, monitors your personally identifiable information (PII) so you don’t have to do it … END_OF_DOCUMENT_TOKEN_TO_BE_REPLACED