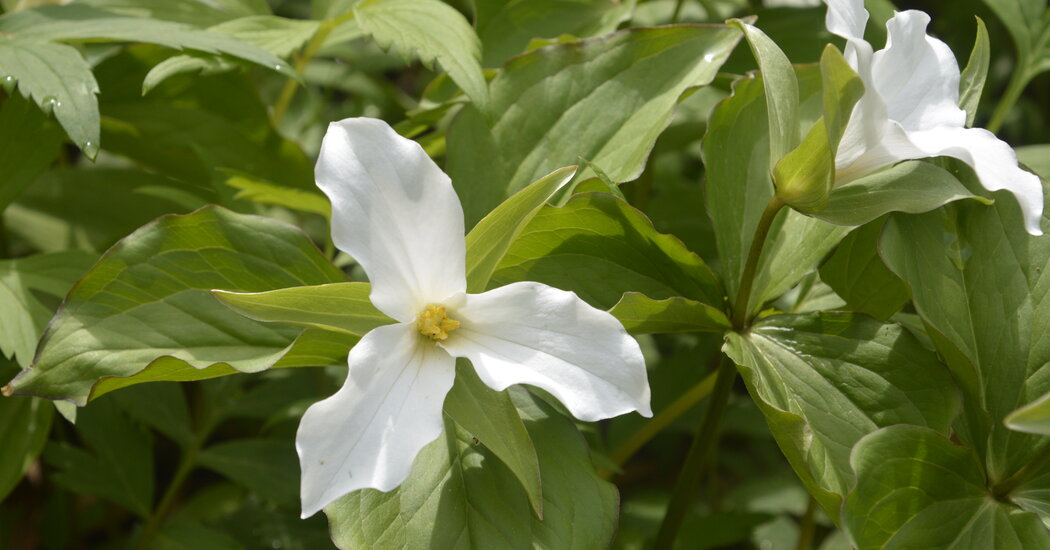 That good things come in threes was a lesson I learned in stages. It began years ago, when I bought my house in the Hudson Valley and noticed three tiny plants growing under the edge of the front porch.

I did not know it then, but they were trilliums — specifically, the native wake robin of the surrounding woodlands, also known as Trillium erectum. I lifted the anonymous creatures out with a trowel and moved them to a bed I was making, just in case they were “something.”

They were something, indeed. And now many of these ephemeral spring plants bloom around my May garden, all of them descended from those first three.

Most of the trillium learning I have accumulated along the way has felt tinged with serendipity or a kind of magic, like that first time. But not the latest installment, from a report published in April that analyzed the risk factors to North American trillium in the wild.

The Conservation Status of Trillium in North America,” the 86-page report. “We don’t have many communication tools like that.”

The status of trilliums in the wild was assessed in partnership with the New Mexico BioPark Society and Mt. Cuba Center, the native plant garden and research facility in Delaware. The study’s genesis: The International Union for Conservation of Nature’s medicinal group had funding to evaluate the state of trillium, a genus used in traditional medicine. They approached the BioPark Society, which reached out to Mt. Cuba, which in turn involved NatureServe, whose database, populated by member programs across the U.S. and Canada, is a tool frequently used to assess the status of plants.

The three teams gathered with other North American experts for four days in October 2019, “to pore over maps, published information and personal observations from the field,” said Amy Highland, the director of collections and conservation lead at Mt. Cuba, which hosted the meeting.

Kohl's announced Friday that it is terminating talks to sell its business, saying that retail environment has significantly deteriorated since the … END_OF_DOCUMENT_TOKEN_TO_BE_REPLACED