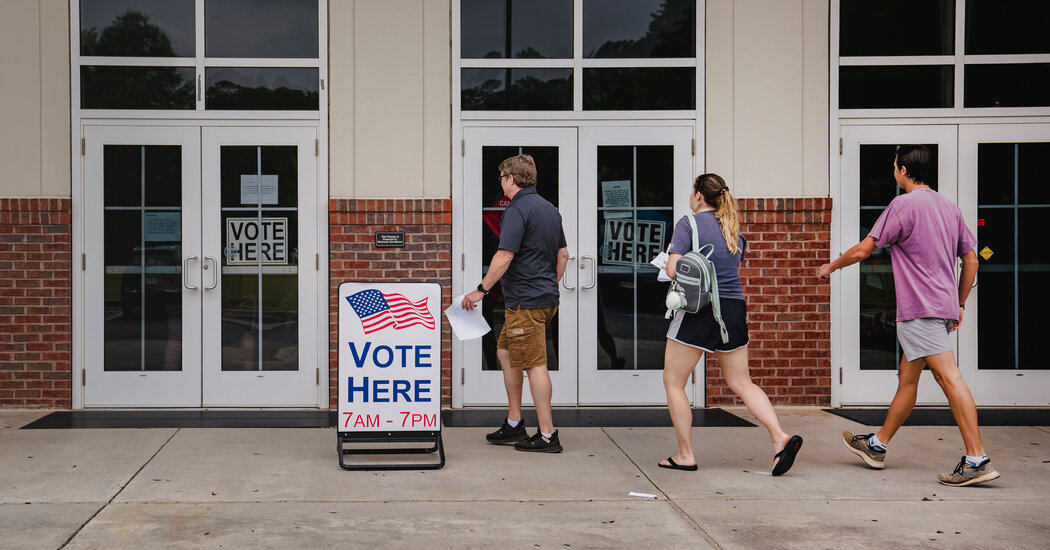 Ahead of the 2020 elections, Connecticut confronted a bevy of falsehoods about voting that swirled around online. One, widely viewed on Facebook, wrongly said absentee ballots had been sent to dead people. On Twitter, users spread a false post that a tractor-trailer carrying ballots had crashed on Interstate 95, sending thousands of voter slips into the air and across the highway.

Concerned about a similar deluge of unfounded rumors and lies around this year’s midterm elections, the state plans to spend nearly $2 million on marketing to share factual information about voting, and to create its first-ever position for an expert in combating misinformation. With a salary of $150,000, the person is expected to comb fringe sites like 4chan, far-right social networks like Gettr and Rumble, and mainstream social media sites to root out early misinformation narratives about voting before they go viral, and then urge the companies to remove or flag the posts that contain false information.

“We have to have situational awareness by looking into all the incoming threats to the integrity of elections,” said Scott Bates, Connecticut’s deputy secretary of the state. “Misinformation can erode people’s confidence in elections, and we view that as a critical threat to the democratic process.”

Connecticut joins a handful of states preparing to fight an onslaught of rumors and lies about this year’s elections.

ABC/Ipsos poll from January, only 20 percent of respondents said they were “very confident” in the integrity of the election system and 39 percent said they felt “somewhat confident.” Numerous Republican candidates have embraced former President Donald J. Trump’s falsehoods about the 2020 election, campaigning — often successfully — on the untrue claim that it was stolen from him.

Some conservatives and civil rights groups are almost certain to complain that the efforts to limit misinformation could restrict free speech. Florida, led by Republicans, has enacted legislation limiting the kind of social media moderation that sites like Facebook, YouTube and Twitter can do, with supporters saying the sites constrict conservative voices. (A U.S. appeals court recently blocked most aspects of the law.) On the federal level, the Department of Homeland Security recently paused the work of an advisory board on disinformation after a barrage of criticism from conservative lawmakers and free speech advocates that the group could suppress speech.

“State and local governments are well situated to reduce harms from dis- and misinformation by providing timely, accurate and trustworthy information,” said Rachel Goodman, a lawyer at Protect Democracy, a nonpartisan advocacy group. “But in order to maintain that trust, they must make clear that they are not engaging in any kind of censorship or surveillance that would raise constitutional concerns.”

Connecticut and Colorado officials said that the problem of misinformation had only worsened since 2020 and that without a more concerted push to counteract it, even more voters could lose faith in the integrity of elections. They also said they feared for the safety of some election workers.

“We are seeing a threat atmosphere unlike anything this country has seen before,” said Jena Griswold, the secretary of state of Colorado. Ms. Griswold, a Democrat who is up for re-election this fall, has received threats for upholding 2020 election results and refuting Mr. Trump’s false claims of fraudulent voting in the state.

Other secretaries of state, who head the office typically charged with overseeing elections, have received similar pushback. In Georgia, Brad Raffensperger, a Republican who certified President Biden’s win in the state, has faced fierce criticism laced with false claims about the 2020 election.

In his primary race this year, Mr. Raffensperger batted down misinformation that there were 66,000 underage voters, 2,400 unregistered voters and more than 10,350 dead people who cast ballots in the presidential election. None of the claims are true. He won his primary last week.

Colorado is redeploying a misinformation team that the state created for the 2020 election. The team is composed of three election security experts who monitor the internet for misinformation and then report it to federal law enforcement.

Ms. Griswold will oversee the team, called the Rapid Response Election Security Cyber Unit. It looks only for election-related misinformation on issues like absentee voting, polling locations and eligibility, she said.

“Facts still exist, and lies are being used to chip away at our fundamental freedoms,” Ms. Griswold said.

Connecticut officials said the state’s goal was to patrol the internet for election falsehoods. On May 7, the Connecticut Legislature approved $2 million for internet, TV, mail and radio education campaigns on the election process, and to hire an election information security officer.

Officials said they would prefer candidates fluent in both English and Spanish, to address the spread of misinformation in both languages. The officer would track down viral misinformation posts on Facebook, Instagram, Twitter and YouTube, and look for emerging narratives and memes, especially on fringe social media platforms and the dark web.

“We know we can’t boil the ocean, but we have to figure out where the threat is coming from, and before it metastasizes,” Mr. Bates said.

“This spreads like a virus,” Ms. Hochul said, demanding that social media executives evaluate their policies to ensure that “everything is being done that they can to make sure that this information is not spread.”

There may be no easy answers. Platforms like Facebook, Twitch and Twitter have made strides in recent years, the experts said, in removing violent content and videos faster. In the wake of the shooting in New Zealand, social platforms and countries around the world joined an initiative called the Christchurch Call to Action and agreed to work closely to combat terrorism and violent extremism content. One tool that social sites have used is a shared database of hashes, or digital footprints of images, that can flag inappropriate content and have it taken down quickly.

But in this case, Ms. Douek said, Facebook seemed to have fallen short despite the hash system. Facebook posts that linked to the video posted on Streamable generated more than 43,000 interactions, according to CrowdTangle, a web analytics tool, and some posts were up for more than nine hours.

When users tried to flag the content as violating Facebook’s rules, which do not permit content that “glorifies violence,” they were told in some cases that the links did not run afoul of Facebook’s policies, according to screenshots viewed by The New York Times.

Twitter had not removed many posts with links to the shooting video, and in several cases, the video had been uploaded directly to the platform. A company spokeswoman initially said the site might remove some instances of the video or add a sensitive content warning, then later said Twitter would remove all videos related to the attack after The Times asked for clarification.

A spokeswoman at Hopin, the video conferencing service that owns Streamable, said the platform was working to remove the video and delete the accounts of people who had uploaded it. 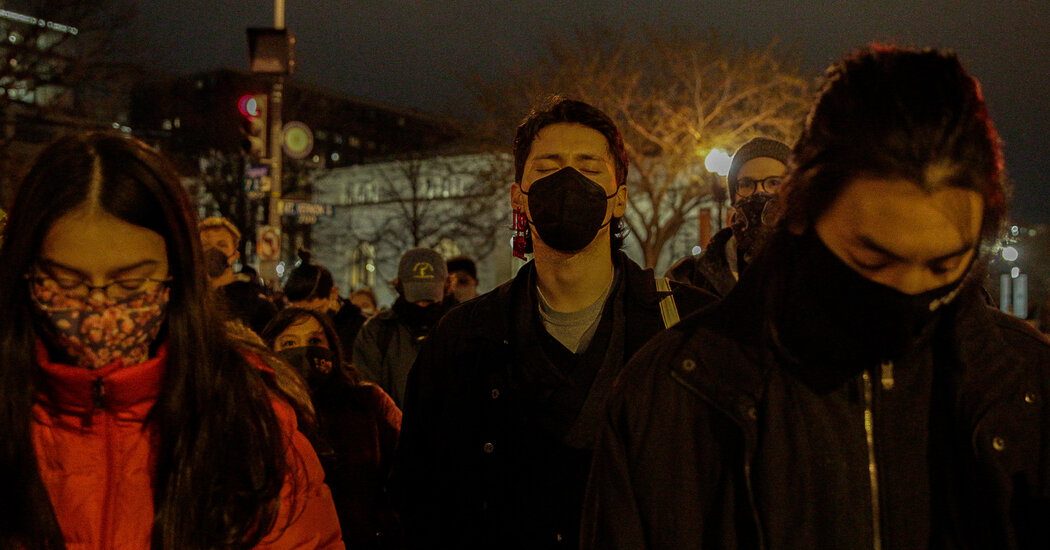 Negative Asian-American tropes have long existed online but began increasing last March as parts of the United States went into lockdown over the coronavirus. That month, politicians including Representative Paul Gosar, Republican of Arizona, and Representative Kevin McCarthy, a Republican of California, used the terms “Wuhan virus” and “Chinese coronavirus” to refer to Covid-19 in their tweets.

Those terms then began trending online, according to a study from the University of California, Berkeley. On the day Mr. Gosar posted his tweet, usage of the term “Chinese virus” jumped 650 percent on Twitter; a day later there was an 800 percent increase in their usage in conservative news articles, the study found.

Mr. Trump also posted eight times on Twitter last March about the “Chinese virus,” causing vitriolic reactions. In the replies section of one of his posts, a Trump supporter responded, “U caused the virus,” directing the comment to an Asian Twitter user who had cited U.S. death statistics for Covid-19. The Trump fan added a slur about Asian people.

In a study this week from the University of California, San Francisco, researchers who examined 700,000 tweets before and after Mr. Trump’s March 2020 posts found that people who posted the hashtag #chinesevirus were more likely to use racist hashtags, including #bateatingchinese.

“There’s been a lot of discussion that ‘Chinese virus’ isn’t racist and that it can be used,” said Yulin Hswen, an assistant professor of epidemiology at the University of California, San Francisco, who conducted the research. But the term, she said, has turned into “a rallying cry to be able to gather and galvanize people who have these feelings, as well as normalize racist beliefs.”

Representatives for Mr. Trump, Mr. McCarthy and Mr. Gosar did not respond to requests for comment.

Misinformation linking the coronavirus to anti-Asian beliefs also rose last year. Since last March, there have been nearly eight million mentions of anti-Asian speech online, much of it falsehoods, according to Zignal Labs, a media insights firm.

In one example, a Fox News article from April that went viral baselessly said that the coronavirus was created in a lab in the Chinese city of Wuhan and intentionally released. The article was liked and shared more than one million times on Facebook and retweeted 78,800 times on Twitter, according to data from Zignal and CrowdTangle, a Facebook-owned tool for analyzing social media.

MIAMI--(BUSINESS WIRE)--Intelli Smart Homes, the leading smart home technology company, has been recognized as one of America’s fastest-growing … END_OF_DOCUMENT_TOKEN_TO_BE_REPLACED

Customers outside a Walmart store in Torrance, California, US, on Sunday, May 15, 2022. Walmart Inc. is scheduled to release earnings figures on May … END_OF_DOCUMENT_TOKEN_TO_BE_REPLACED

The past few years have been brutal on homebuyers' budgets. Would-be buyers have been priced out of some of the most desirable neighborhoods thanks to … END_OF_DOCUMENT_TOKEN_TO_BE_REPLACED