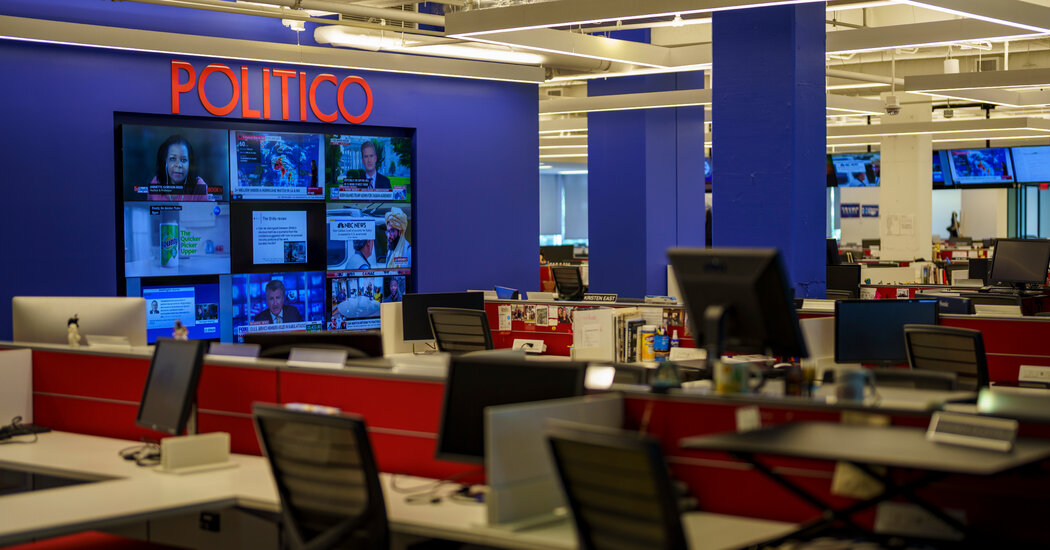 “A lot of other people had much bigger emotional reactions than I did,” he said brightly.

He also said that he did not consider Axios a competitor, given that its coverage was “broader” than Politico’s. He pointed to recent Axios articles on Apple News and the hurricane approaching New Orleans.

“We would never do a piece on meteorology,” Mr. Allbritton said.

But Mr. VandeHei’s exit did not sit well with his former longtime editorial partner, Mr. Harris, and the site’s new editor, Carrie Budoff Brown. “Politico implodes,” gloated The Post. And as Axios took on the sheen of hot new thing, the rivalry between the two publications turned bitter. (At this point, assigning blame for the breach is a little like trying to glibly arbitrate the Israel-Palestine conflict.)

Mr. Harris spent the next year persuading Politico’s reporters and editors not to abandon ship, while Ms. Budoff Brown restructured the newsroom and worked to improve a workplace culture some employees described as grinding and sometimes sexist.

In May, Mr. Allbritton said he caught wind that Mr. VandeHei was in talks to sell Axios to Axel Springer. Did he start negotiating with the Germans to spoil Mr. VandeHei’s deal? I supposed that might have been part of the attraction. And in Politico’s news release announcing the planned sale, a quote from Mr. Allbritton suggested as much: “Particularly in recent years,” he said, “we have put the emphasis on doing rather than boasting.” A spokesman denied that the line was aimed at his former colleagues, and Mr. Allbritton said he was simply, after years of flirtation with Axel Springer, ready to acknowledge that his family business didn’t have the “horsepower” necessary to keep growing.

“We’re better off with this publication going to a big global company,” he said.

On the day of the announcement, The New York Times reported that Axel Springer might still pursue a deal for Axios — perhaps Mr. VandeHei would be chief executive after the two publications merged? (I’d always assumed he would run for office in his native Wisconsin one of these days.) Politico’s executives in Washington pressed the German company to add a firm denial to the story, which they did.

Asked why he had chosen Politico over Axios, Mr. Döpfner told me in a telephone interview, “It’s an easy decision that you go for the No. 1.” Mr. VandeHei called the sale “great news” for companies that produce quality journalism in a text to me.

About an hour outside of the capital city of San Juan, the sumptuous spread known as Hacienda Illusion is now on the market for $48 million. For a … END_OF_DOCUMENT_TOKEN_TO_BE_REPLACED

Kids at Hilton Aruba play with the resident birds. Hilton Aruba As summer nears, hotels around the world are making big changes and refreshing their … END_OF_DOCUMENT_TOKEN_TO_BE_REPLACED

In 1789, before the slave rebellion, the marquis bought 21 recently kidnapped Africans before leaving for France. But he didn’t indicate where they … END_OF_DOCUMENT_TOKEN_TO_BE_REPLACED