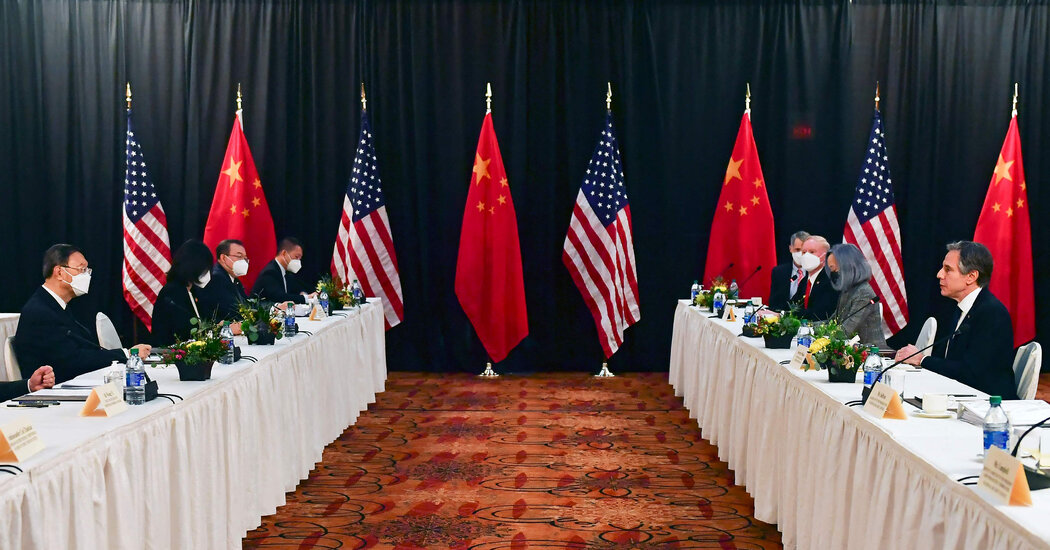 The extraordinary rancor aired by China’s top diplomats in Alaska was a manifestation of a newly combative and unapologetic China, one increasingly unbowed by diplomatic pressure from American presidential administrations.

Just as American views on China have shifted after years of encouraging the country’s economic integration, so have Beijing’s perceptions of the United States and the privileged place in the world that it has long held. The Americans, in their view, no longer have an overwhelming reservoir of global influence, nor the power to wield it against China.

That has made China more confident than it once was in pursuing its aims openly and unabashedly — from human rights issues in Hong Kong and Xinjiang to the territorial disputes with India and Japan and others in South China Sea to, most contentiously of all, the fate of Taiwan, the self-governing democracy that China claims as its own.

While China still faces enormous challenges at home and around the world, its leaders now act as if history were on their side.

new report on the issue, said on Thursday.

Meetings between the Chinese and the Americans have been testy before, but the balance of power between the two countries has changed.

For decades, China approached American governments from positions of weakness, economically and militarily. That forced it at times to accede to American demands, however grudgingly, whether it was to release detained human-rights advocates or to accept Washington’s conditions for joining the World Trade Organization.

China today feels far more assured in its ability to challenge the United States and push for its own vision of international cooperation. It is a confidence embraced by China’s leader since 2012, Xi Jinping, who has used the phrase, “the East is rising, and the West is declining.”

largely tamed at home, and the internal political divisions roiling the United States. Mr. Yang singled both out in his remarks on Thursday.

“The challenges facing the United States in human rights are deep-seated,” Mr. Yang said, citing the Black Lives Matter movement against police brutality. “It’s important that we manage our respective affairs well instead of deflecting the blame on somebody else in this world.”

In the latest round, the State Department announced this week that it would impose sanctions on 24 Chinese officials for their role in eroding Hong Kong’s electoral system. The timing of the move, just as the Chinese were preparing to depart for Alaska, contributed to the acrimony.

“This is not supposed to be the way one welcomes his guests,” China’s foreign minister, Wang Yi, said in remarks in Alaska that were equally pointed as Mr. Yang’s.

impervious to outrage over its actions, making the task all the more challenging.

new national security law to restrict dissent in Hong Kong did nothing to halt a new law this year dismantling the territory’s electoral system.

China also chose Friday to begin its trials of two Canadians who were arrested more than two years ago and charged with espionage in what was widely seen as retaliation for the American effort to extradite a senior executive from Huawei, the telecommunications giant, for fraud involving sales to Iran.

It was striking that Mr. Yang, a veteran diplomat and a member of the ruling Politburo of the Communist Party of China, used his remarks to say that neither the United States nor the West broadly had a monopoly on international public opinion.

That is a view reflected in China’s successful efforts to use international forums like the United Nations Human Rights Council to counter condemnation over policies like the mass detention and re-education programs in Xinjiang, the predominately Muslim region in western China.

“I don’t think the overwhelming majority of countries in the world would recognize that the universal values advocated by the United States or that the opinion of the United States could represent international public opinion,” Mr. Yang said. “And those countries would not recognize that the rules made by a small number of people would serve as the basis for the international order.”

wrote approvingly under a video of Mr. Yang’s remarks.

While American officials said the temperature of the meetings in Alaska went down behind closed doors, few officials or experts on either side are hopeful of a significant improvement in relations. The talks are scheduled to continue for another round on Friday.

“On the whole, this negotiation is only for the two sides to put all the cards on the table, for the two sides to recognize how big and deep each other’s differences are,” said Wu Qiang, an independent political analyst in Beijing, “But in fact, it will not help to bring about any reconciliation or any mitigation.” 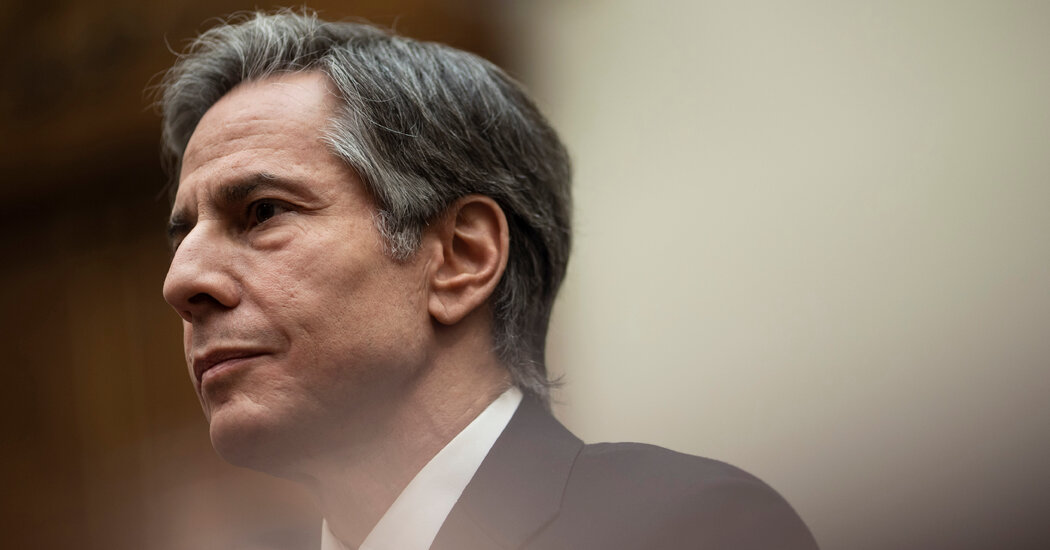 In a statement on Wednesday, a State Department spokesman said that Mr. Blinken and Mr. Sullivan would meet in Anchorage next Thursday with China’s foreign minister, Wang Yi, and its top diplomat, Yang Jiechi.

The meetings will follow visits next week by Mr. Blinken and Defense Secretary Lloyd J. Austin III to Japan and South Korea, two core U.S. allies that have fraught relations with China and that would expect to be consulted before an engagement like the one planned with Beijing.

“It was important to us that this administration’s first meeting with Chinese officials be held on American soil, and occur after we have met and consulted closely with partners and allies in both Asia and Europe,” said Jen Psaki, the White House press secretary.

a speech by Mr. Blinken, as well as a new White House national security strategy document, identified China as the top nation-state threat to the United States.

In his speech, Mr. Blinken said managing the relationship with China would be “the biggest geopolitical test of the 21st century” and called China the one country able “to seriously challenge the stable and open international system.”

Mr. Biden spoke to China’s leader, Xi Jinping, last month, warning him that he intended to challenge China’s “coercive and unfair economic practices” as well as its record on human rights and its crackdown on Hong Kong, according to a White House summary of the call. But Mr. Biden also said he hoped to cooperate with Mr. Xi on matters like the coronavirus, nuclear proliferation and climate change.

U.S. officials did not describe a specific agenda for the Anchorage meeting. Mr. Blinken said on Twitter that he looked forward to engaging the Chinese officials “on a range of issues, including those where we have deep disagreements.”

Mr. Blinken will stop in Alaska on the return leg of his Asia trip, his first foray out of Washington amid the coronavirus pandemic. Until now Mr. Blinken, to his frustration, has been conducting diplomacy exclusively by telephone and video. Mr. Blinken has been vaccinated, but officials have cited the risks for others accompanying him as a reason for his limited travel to date.

He will depart from Washington on Monday, with planned stops in Tokyo and Seoul before proceeding to Anchorage. Mr. Austin, who will travel on a separate plane, will depart from Seoul for meetings with officials in India, the Defense Department said.

Testifying on Wednesday before the House Committee on Foreign Affairs, Mr. Blinken said the meeting would be an opportunity “to lay out in very frank terms the many concerns that we have with Beijing’s actions and behavior,” including the effects of Chinese trade practices on American workers.

But he said he and Mr. Sullivan would also “explore whether there are other avenues for cooperation” with Beijing.

Mr. Blinken added that the meeting was not the start of a strategic dialogue, and that follow-up meetings would depend on “tangible progress and tangible outcomes” on Washington’s concerns.

The meeting in Alaska will be the first known in-person diplomatic contact between American and Chinese diplomats since June, when the secretary of state at the time, Mike Pompeo, held a tense and largely fruitless meeting with Mr. Yang in Hawaii.

On Friday, Mr. Biden will meet virtually with the leaders of Australia, Japan and India, a group collectively known as “the Quad,” and one whose implicit purposes is to check Chinese economic and military influence in Asia.

The strategy document released by the White House last week, and overseen by Mr. Sullivan, outlined plans for rebuilding the United States’ economy, democracy and foreign alliances to establish a “position of strength” against rivals like Russia and China.

“By restoring U.S. credibility and reasserting forward-looking global leadership, we will ensure that America, not China, sets the international agenda,” the White House plan said.

But Mr. Biden has tread cautiously so far and has not yet taken any major policy actions toward China. Even President Donald J. Trump’s tariffs on Chinese imports are under review, Mr. Sullivan said last week. And the Pentagon is conducting a monthslong review of its China policies and force posture in Asia.

Chinese officials have publicly said that they do not seek confrontation with the United States or global dominance, and that the Trump administration is to blame for a relationship between Washington and Beijing that analysts say is at its lowest point in decades.

Mr. Crumbley fired more than 30 rounds as terrified students raced for safety and locked themselves inside classroom doors barricaded by desks, the … END_OF_DOCUMENT_TOKEN_TO_BE_REPLACED

CEOs and corporate insiders have sold a record $69 billion in stock in 2021, as looming tax hikes and lofty share prices encourage many to take … END_OF_DOCUMENT_TOKEN_TO_BE_REPLACED

Kingston, N.Y., was hardly a place to hang out in the 1990s, when Malia Du Mont arrived in the area to attend Bard College, about 10 miles up the … END_OF_DOCUMENT_TOKEN_TO_BE_REPLACED