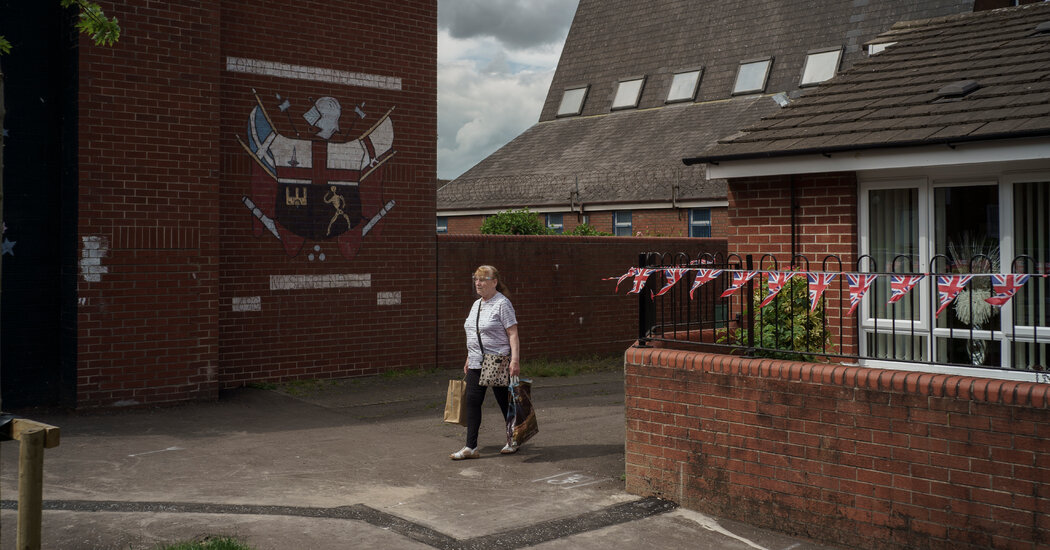 BELFAST, Northern Ireland — The pandemic was hard on David Milliken, who sells drums, flags and pro-British banners from his brightly-colored shop in Sandy Row, a loyalist stronghold in Belfast. But now, he said, “things have started to open up again,” especially since “the unrest is back.”

Two months ago, Sandy Row exploded in flames as masked demonstrators hurled stones and gasoline bombs at the police to protest what they call the “Brexit betrayal.” With the loyalist marching season kicking off next month, there are fears that the eruption of violence was only a warm-up act.

Like others in Sandy Row, Mr. Milliken, 49, said he did not want a return to the Troubles, the bloody 30-year guerrilla war between Catholic nationalists, seeking unification with the Republic of Ireland, and predominantly Protestant loyalists and unionists, who want to stay in the United Kingdom.

iconic military victory over a Catholic king, James II, in 1690.

the 1998 Good Friday Agreement, which ended decades of sectarian strife, in part by tamping down Northern Ireland’s identity politics. Brexit has reawakened those passions, and they could flare further next year if, as polls currently suggest, the main Irish nationalist party, Sinn Fein, becomes the biggest party in a field of divided, demoralized unionists.

the Northern Ireland Protocol, a post-Brexit legal construct that has left the North awkwardly straddling the trading systems of Britain and the European Union. The protocol grew out of a deal between London and Brussels to avoid resurrecting a hard border between Northern Ireland and the Republic of Ireland. The catch is, it requires checks on goods flowing between the North and the rest of the United Kingdom, which carries both a commercial and psychological cost.

“It has hit the community here like a ton of bricks that this is a separation of Northern Ireland from the rest of the United Kingdom,” said David Campbell, chairman of the Loyalist Communities Council, which represents paramilitary groups that some say are stirring up unrest.

Mr. Campbell said that the paramilitaries actually tried to keep people off the streets. But he warned that unless the protocol was either scrapped or radically rewritten, violence would break out again during the marching season.

bitter divorce with the European Union.

Jonathan Powell, a former chief of staff to Tony Blair, the British prime minister at the time of the Good Friday Agreement, acknowledged that, “Biden could be important on the protocol.”

“Britain is rather friendless outside the E.U., so there is a limit to how far they can go against what the administration wants,” Mr. Powell added.

Until now, Mr. Johnson has taken a hard line in negotiations over the protocol. His senior aide, David Frost, says it is up to the European Union to propose remedies to the disruptions of the border checks. If it does not, Britain could abandon the protocol — a move the European Union says would breach the withdrawal agreement, though the bloc’s officials briefly threatened to scrap the protocol themselves in January.

the Democratic Unionists, a Northern Irish party that supported Brexit and has now fallen into disarray because of the fierce blowback from Mr. Johnson’s deal.

The party recently deposed its leader, Arlene Foster, and is squabbling over how to prepare for elections to the Northern Irish Assembly in May 2022. That has opened the door to something once thought inconceivable: that Sinn Fein could emerge as the largest party, with the right to appoint the first minister.

With Sinn Fein’s vestigial links to the paramilitary Irish Republican Army and bedrock commitment to Irish unification, an Assembly led by the party could prove far more destabilizing to Northern Ireland’s delicate power-sharing arrangements than the post-Brexit trading rules, which are difficult to explain, let alone use as a rallying cry.

But Sinn Fein’s leaders say that, with a growing Catholic population and the fallout from Brexit, momentum is on their side. The unionist parties supported Brexit, while they opposed it. They view the campaign against the protocol as a futile effort that only lays bare the costs of leaving the European Union.

“You have a very stark choice,” Michelle O’Neill, the party’s leader and the deputy first minister of Northern Ireland, said in an interview. “Do you want to be part of inward-looking Brexit Britain or outward-looking inclusive Ireland?”

Another question is how the authorities will deal with further unrest. In April, the police moved carefully against the rock-throwing crowds, treating them as a local disturbance rather than a national security threat. But if the violence escalates, that could change.

Monica McWilliams, an academic and former politician who was involved in the 1998 peace negotiations, said, “Loyalist threats, or violent actions, against a border down the Irish Sea may no longer be seen as a domestic problem.”

But the greater challenge, she said, is reassuring unionists and loyalists at a time when politics and demographics are moving so clearly against them. While there is little appetite in the Irish Republic for a near-term referendum on unification, Sinn Fein is within striking distance of being in power on both sides of the border — a development that would put unification squarely on the agenda.

In Sandy Row, the sense of a community in retreat was palpable.

Paul McCann, 46, a shopkeeper and lifelong resident, noted how real-estate developers were buying up blocks on the edge of the neighborhood to build hotels and upscale apartments. The city, he said, wants to demolish the Boyne Bridge — a predecessor of which William of Orange is said to have crossed on his way to that fateful battle with James II — to create a transportation hub.

For Gordon Johnston, a 28-year-old community organizer, it’s a matter of fairness: loyalists accepted the argument that reimposing a hard border between the north and south of Ireland could provoke violence. The same principle should apply to Northern Ireland and the rest of the United Kingdom.

“You can’t have it both ways,” he said. “You either have no borders or you have violence in the streets.”

The Seattle Seahawks are very much still in the running for Baker Mayfield. (Photo by Stacy ... [+] Revere/Getty Images) Getty Images The Seattle … END_OF_DOCUMENT_TOKEN_TO_BE_REPLACED

(CNN) — Kim Kyung-seop recalls going to cheap bars after class with his friends, where they binged on as much makgeolli as possible. "You know the … END_OF_DOCUMENT_TOKEN_TO_BE_REPLACED