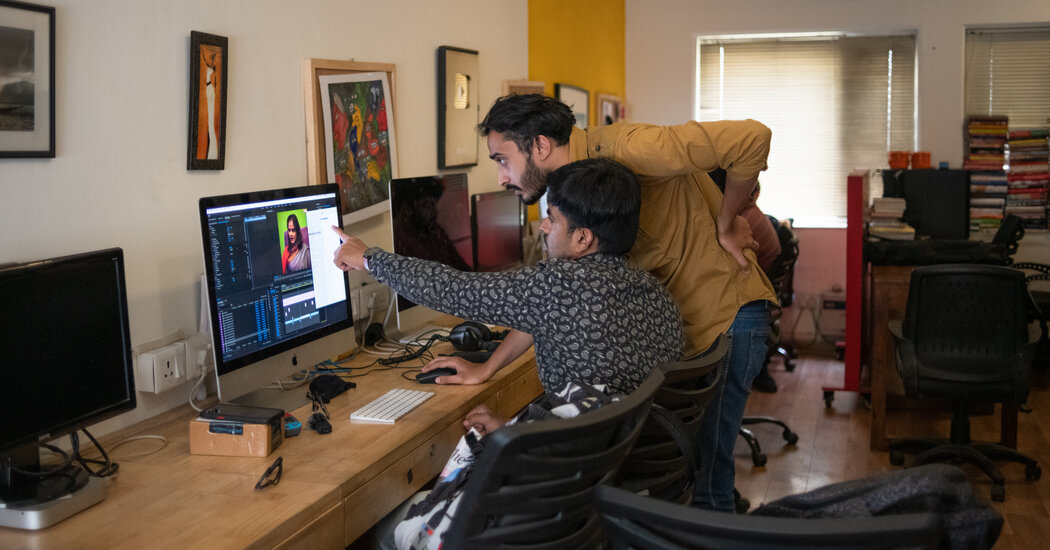 One group remains untamed: A relatively new generation of scrappy, online-focused news outlets. With names like The Wire, The Print, The Scroll, and NewsLaundry, these publications lack big corporate owners that Mr. Modi’s party can court. They also don’t depend on government advertising money that officials can threaten to withhold.

Now, the platforms say, Mr. Modi is working to rein them in, too.

India’s media outlets had until Saturday to comply with new government rules that they say will force them to change or take down content if online trolls mount a concerted campaign of complaints against their coverage. It would also give the government sweeping new powers to quickly take down articles or other material.

The rules, they say, will force them to toe Mr. Modi’s line or close their doors as the prime minister pushes his most ambitious and controversial initiatives.

freedom of the press has eroded under Mr. Modi’s watch.

Still, while his efforts enjoy broad support in India, critics of his campaigns — from remaking the country’s money system overnight to changing citizenship laws to disadvantage Muslims — have found a home in the robust online space. Their potential audience is vast: India could have more than 800 million smartphone users by next year.

In February, it also enacted online content rules that empower complainers. Online platforms must name a grievance officer who acknowledges complaints within one day and resolves them within 15. The complaint must be taken swiftly to a three-layer system, with a final stop at a government-appointed body that can order platforms to delete or change content.

The new rules also give the government emergency powers to take down content immediately if officials believe it threatens public order or the country’s security or sovereignty.

Netflix and Amazon. The full scope of the law is unclear; some people believe that it could apply to international news publishers like The New York Times.

The government has said it wants to protect average users from online abuse. Officials have cited the spread of deliberate disinformation, harassment of women, abusive language and disrespect of religious groups. Mr. Modi’s ministers have said the rules create a “soft-touch oversight mechanism” that would protect India and prevent “internet imperialism” by major social media platforms.

ownership structure behind many Indian media outlets makes them too dependent on advertising and investors, he argues, influencing their editorial decisions. With The Wire — owned by the Foundation for Independent Journalism, a trust — he wanted to explore a different arrangement.

The Wire operates from a crammed southern New Delhi office. Mr. Varadarajan sits in a corner. To save money after India’s stringent Covid-19 lockdown last year, The Wire vacated a floor.

“We have all been downgraded,” he told a columnist one recent afternoon who had looked for him at his old office upstairs. “Cutbacks.”

sudden increase in the fortunes of the son of one Mr. Modi’s most important lieutenants. They have also scrutinized business deals that may have favored companies seen as friendly to the prime minister.

At a recent meeting at The Wire newsroom, the conversation ranged from coverage plans for state elections, to how to shoot video quickly, to how to balance working at home and in the office as coronavirus cases tick up.

But much of the talk focused on the new regulations. Mr. Varadarajan told his staff that The Wire’s first court hearing had gone well but that the authorities were watching the digital platforms closely.

“Now that you know they will be waiting for opportunity to latch onto anything, look at it as extra responsibility,” Mr. Varadarajan said. “We have to be 150 percent careful to not leave any wiggle room to troublemakers, to not make their life any easier.”

LONDON — “Your local pub, it’s a bit like your favorite pair of shoes or jeans, something you just completely take for granted,” Rob Cope said, … END_OF_DOCUMENT_TOKEN_TO_BE_REPLACED

Nicole Piatak, a nanny from Stow, Ohio, began working with Ms. Bendel in the fall of 2019 to plan her honeymoon, a six-day trip to Hawaii, in October … END_OF_DOCUMENT_TOKEN_TO_BE_REPLACED