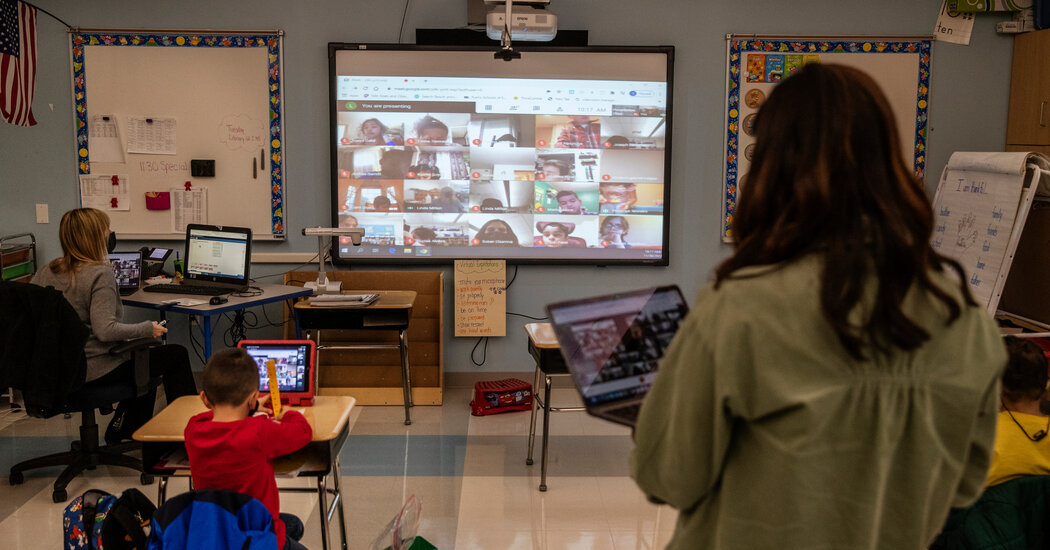 As the coronavirus pandemic ebbs in the United States and vaccines become available for teenagers, school systems are facing the difficult choice of whether to continue offering a remote learning option in the fall.

When Mayor Bill de Blasio of New York City took a stance on Monday, saying that the city will drop remote learning in its public schools, the move may have added to the pressure on other school systems to do the same.

Some families remain fearful of returning their children to classrooms, and others have become accustomed to new child care and work routines built around remote schooling, and are loath to make major changes.

But it is increasingly clear that school closures have exacted an academic and emotional toll on millions of American students, while preventing some parents from working outside the home.

no longer have the option of sending their children to school virtually in the fall. Illinois plans to strictly limit online learning to students who are not eligible for a vaccine and are under quarantine orders.

Connecticut has said it will not require districts to offer virtual learning next fall. Massachusetts has said that parents will be able to opt for remote participation only in limited circumstances.

In California, which lagged behind the rest of the nation in returning to in-person schooling this spring, Gov. Gavin Newsom said he would compel districts to offer traditional school in the fall, while also offering remote learning for families who want it. Some lawmakers there have proposed an alternative approach that would cap the number of students enrolled in virtual options.

It is a major staffing challenge for districts to simultaneously offer both traditional and online classes. Before the pandemic, teachers’ unions were typically harsh critics of virtual learning, which they called inherently inferior. But with some teachers still hesitant to return to full classrooms, even post-vaccination, many unions have said parents should continue to have the choice to opt out of in-person learning.

Some teachers, parent groups and civil rights organizations have also argued that families of color are the least confident that their children will be safe in school buildings, and thus should not be pushed to return before they are ready.

about one-third of American elementary and secondary students attend schools that are not yet offering five days a week of in-person learning. Those school districts are mainly in areas with more liberal state and local governments and powerful teachers’ unions.

Disputes among administrators, teachers and parents’ groups over when and how to reopen schools have led to messy, protracted public battles in cities like Chicago and Los Angeles.

Governors, mayors and school boards around the country almost all now say that traditional in-person teaching schedules will be available in the fall, but there is still limited clarity on what rights parents will have to decline to return their children to classrooms. Many districts and states have yet to announce what their approach will be.

Among urban districts, the superintendent in San Antonio, Pedro Martinez, has said he will greatly restrict access to remote learning next school year, in part because many teenagers from low-income families have taken on work hours that are incompatible with full-time learning, a trend he wants to tamp down. The Philadelphia and Houston schools have said they will continue offering virtual options.

The superintendent of the nation’s fourth-largest district, Miami-Dade, has said he hopes to welcome back “100 percent” of students to in-person learning in the fall, but that students will retain the option to enroll instead in an online academy that predates the pandemic.

If you've been to Baker Beach in San Francisco, you've probably looked up at 1 25th Avenue. The home, which sits among several stunning homes along … END_OF_DOCUMENT_TOKEN_TO_BE_REPLACED