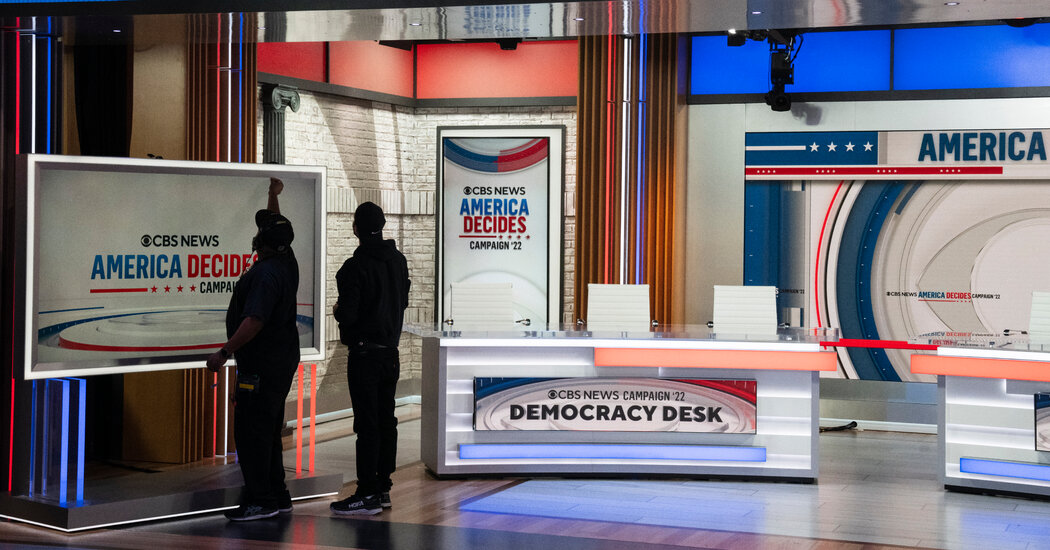 Gearing up to report this year’s midterm election results, American television networks are facing an uncomfortable question: How many viewers will believe them?

Amid rampant distrust in the news media and a rash of candidates who have telegraphed that they may claim election fraud if they lose, news anchors and executives are seeking new ways to tackle the attacks on the democratic process that have infected politics since the last election night broadcast in 2020.

“For entrepreneurs of chaos, making untrue claims about the election system is a route to greater glory,” said John Dickerson, the chief political analyst at CBS News, who will co-anchor the network’s coverage on Nov. 8. “Elections and the American experiment exist basically on faith in the system, and if people don’t have any faith in the system, they may decide to take things into their own hands.”

CBS has been televising elections since 1948. But this is the first year that the network has felt obligated to install a dedicated “Democracy Desk” as a cornerstone of its live coverage. Seated a few feet from the co-anchors in the network’s Times Square studio, election law experts and correspondents will report on fraud allegations and threats of violence at the polls.

one-third of adults in a recent Gallup poll expressing confidence in it.

“I can’t control what politicians are going to say, if they choose to call an election result into question,” said David Chalian, CNN’s political director. “You’ve got to be clear, when it’s a partial picture, that nothing about that is untoward.”

“blue wave” had fizzled and that Republicans would retain control of the House. It was Fox News again, working off a proprietary data model, that made the correct call that Democrats would take the chamber.

controversial Arizona call in 2020. Although Fox’s projection was eventually proved correct, it took several days for other news outlets to concur, and Mr. Trump turned his wrath on the network in retaliation. The network later fired a top executive, Chris Stirewalt, who was involved in the decision to announce the call so early; another executive involved in the decision, Bill Sammon, promptly retired.

“What we want to be, always, is right — and first is really nice — but right is what we want to be,” said Mr. Baier of Fox. “In the wake of 2020, we’re going to be looking at numbers very closely, and there may be times when we wait for more raw vote total than we have in the past.”

“It’ll be a lot smoother than that moment,” he added, referring to when he and his fellow co-anchors were visibly caught by surprise as their colleagues projected a victory for Mr. Biden in Arizona. Fox officials later ascribed the confusion to poor communication among producers.

“I think,” Mr. Baier said, “we all learned a lot from that experience.”

AUSTIN, Texas--(BUSINESS WIRE)--As the first multifamily management company to be recognized in the Public Relations and Marketing Excellence Awards, … END_OF_DOCUMENT_TOKEN_TO_BE_REPLACED

There have been whispers of cooling housing and rental prices in the San Francisco Bay Area, but that hasn't yet translated into practical, noticeable … END_OF_DOCUMENT_TOKEN_TO_BE_REPLACED

Cars pass in Independence Square at twilight in Kyiv, Ukraine, Monday, Oct. 31, 2022. Rolling ... [+] blackouts are increasing across Ukraine as the … END_OF_DOCUMENT_TOKEN_TO_BE_REPLACED