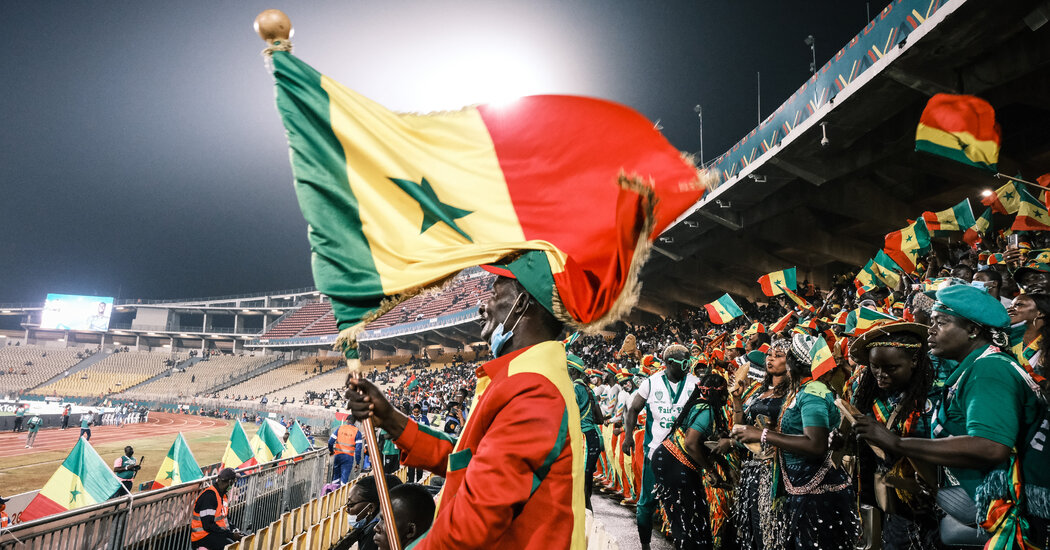 YAOUNDÉ, Cameroon — She had watched some of the matches secretly, volume turned down low so that nobody would report her. She had seen the threats, and knew that she could be kidnapped or killed for watching the African soccer tournament that her country, Cameroon, was hosting.

But she was fed up with containing her excitement each time Cameroon scored, so on Wednesday, Ruth, who lives in a region at war where secessionist rebels have forbidden watching the games, secretly traveled to the capital, Yaoundé, to support her team in person.

“I’d love to scream, if it’s possible,” she said on Thursday, after safely reaching Yaoundé, while getting ready for the big game. “I decided to take the risk.”

African soccer is nearing the end of what everyone agrees has been a magnificent month. The 52 games in this year’s much-delayed Africa Cup of Nations tournament have brought some respite for countries going through major political upheaval or war, and those weathering the disruption and hardship wrought by Covid.

coup last week in Burkina Faso, Burkinabe soldiers back home danced with joy. When Senegal then beat Burkina Faso in the semifinal on Wednesday night, Dakar’s streets were filled with cars honking and flags waving. Online, after every match, thousands of people flock to Twitter Spaces to jointly dissect what happened.

a harsh crackdown. Human rights abuses by the military helped fuel a fully-fledged armed struggle by English-speaking fighters known as Amba boys, after Ambazonia, the name they have given their would-be state.

The separatists have warned people there not to watch Afcon, as the soccer tournament is known, and certainly not to support Cameroon. But many anglophones like Ruth — a government worker who asked to be identified by only her first name to protect her from retribution — have defied the risk and have traveled to majority francophone cities to attend matches.

“We may not be a very united nation, but I think this one thing brings us together,” Ruth said, adding that it was common knowledge that even as they threatened, kidnapped and tortured other spectators, the Amba fighters were watching the tournament in their camps.

Afcon is special. Players who are relatively unknown outside their countries’ borders play alongside multimillionaire stars from the world’s most elite teams who take time off to represent their countries, right in the middle of the European season.

“It wasn’t easy,” said Sambo Diallo, a fan standing with his arms out in a Yaoundé hotel bursting with fans from Burkina Faso, as a friend painted his entire head, face and torso with his country’s flag. “We weren’t happy, but we had to be brave.”

Despite the anxiety about their families at home, Burkina Faso’s players won that quarterfinal. Still on a high, a green bus full of cheering Burkina Faso fans who had followed their squad around the country rolled into Yaoundé on Wednesday afternoon. Their team was about to meet Senegal in the semis.

Soccer had obviously brought the Senegalese team together, the jewel in its crown one of the biggest stars on the continent, Sadio Mané, who also plays for Liverpool.

eight people died in a stampede. But she got stuck in heavy traffic on her way, and could not make it in time for kickoff. So she ducked into a bar and watched the match there.

Cameroon lost, 3-1, on penalty kicks. “It was still worth it because I could watch with excited fans,” she said.

And she screamed and shouted a lot. 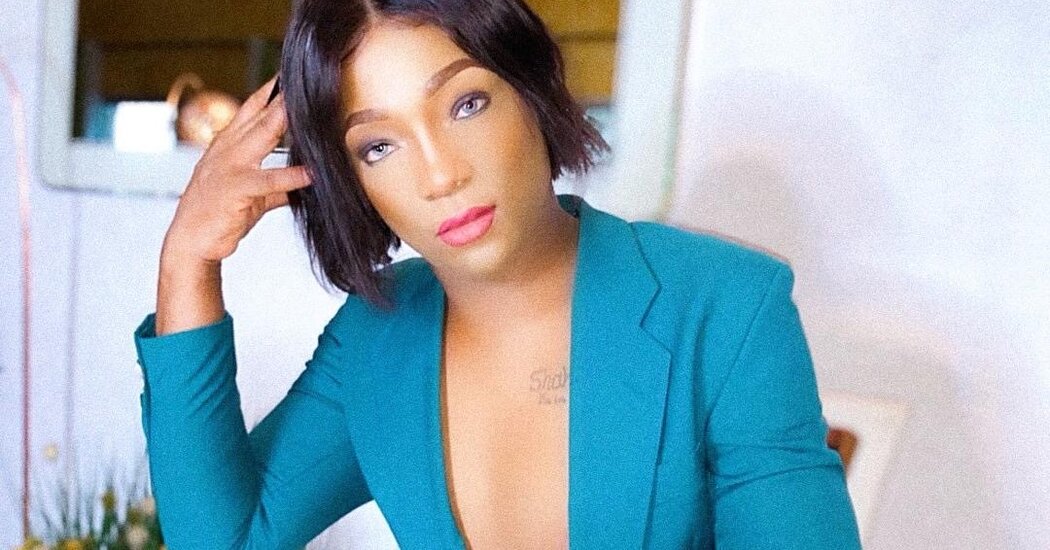 Two transgender women were sentenced to five years in prison in Cameroon this week after they were found guilty of “attempted homosexuality” and public indecency, the latest example of an increasing crackdown on gay and transgender people in the West African nation, human rights groups say.

Shakiro, identified in police documents as Loïc Njeukam, and Patricia, referred to as Roland Mouthe, both identify as transgender and were arrested in February as they were having dinner at a restaurant in Douala, Cameroon’s economic capital. On Tuesday, they were also found guilty of failing to show proof of identity and given the maximum fine of 200,000 CFA francs, or $370.

Shakiro, a social media personality who has amassed tens of thousands of followers through her posts calling for more tolerance toward gender minorities in Cameroon, has stopped eating and shared plans to die by suicide since the verdict, according to her mother, Joséphine Marie Njeukam, who visited her in prison on Wednesday.

Ms. Njeukam said her child told her, “‘Mum, I won’t survive here for five years.’” She said her child didn’t kill anyone or steal, and that her sexuality “shouldn’t be a crime.”

according to Human Rights Watch, and several of those arrested were subjected to beatings and other forms of abuse.

“There has long been an anti-L.G.B.T. sentiment in Cameroon,” said Ilaria Allegrozzi, a researcher at Human Rights Watch who documents abuses in the country. “Now the judicial system contributes to the perception that homosexual and transgender people are criminals.”

The sentence for Shakiro and Patricia, who both go by a single name, is the maximum punishment under Cameroon’s penal code for engaging in sexual intercourse with a person of the same sex. But the women’s lawyer says they were detained while they were having dinner in a public space, and were not intimate or attempting to be.

Shakiro, 23, and Patricia, 27, were at a restaurant in Douala on Feb. 8 when police officers arrested them on charges of failing to provide identity documents. The two remained in prison for two months awaiting trial, according to their lawyer, Alice Nkom, and were sentenced on Tuesday.

attracted a wide following on social media, where she has repeatedly called for more tolerance against homosexual and transgender people in Cameroon.

“My sexual orientation and my sexuality aren’t choices,” she wrote in March. “But your baseless hatred and your homophobia are.”

Linda Noumsi, a makeup artist and friend of Shakiro’s, said her activism had attracted many critics. “She has a strong personality, and she can be quite vocal about her cause, which brought real supporters, fake friends, and enemies,” Ms. Noumsi said.

Ms. Nkom, the lawyer, said the verdict sent a pernicious message to the public in Cameroon: “It says, ‘If you don’t like someone’s appearance because they are different, you can just call the police, and they’ll have them arrested.’” 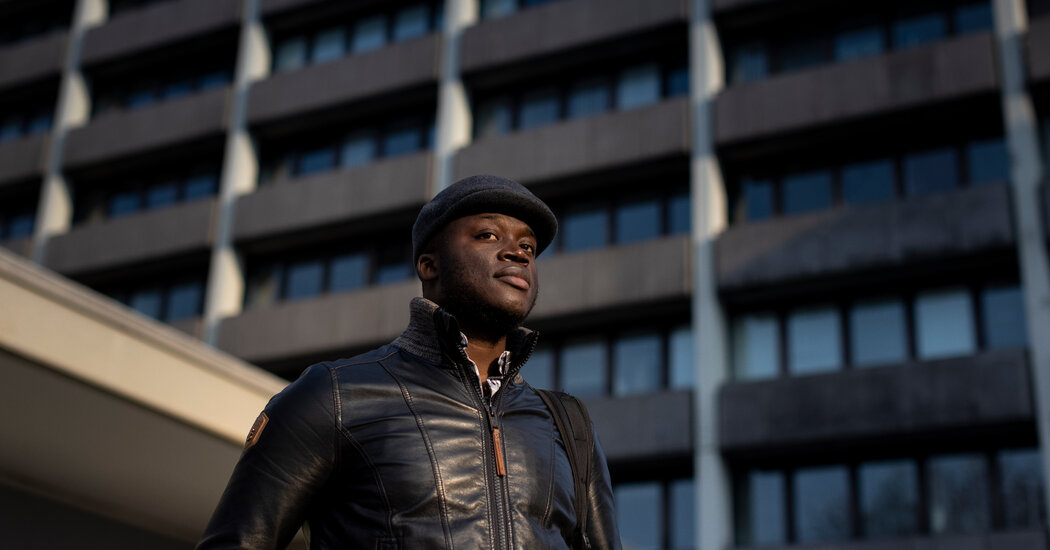 GELSENKIRCHEN, Germany — The country’s largest-circulation tabloid called him the “scandal asylum seeker” and accused him (falsely) of entering the country illegally. People hacked his social media accounts and broadcast his location and personal information. A far-right political leader decried him as the “ringleader” of a violent protest, while another even suggested people like him would be a good reason to bring back the death penalty in Germany.

Alassa Mfouapon is hardly the first refugee to become sensationalist fodder for tabloids or a convenient scapegoat for far-right, anti-immigration politicians. In the five years since a major wave of refugees arrived in Germany, such portrayals have become commonplace.

But the 31-year-old from Cameroon is the first to take them to court for those depictions — and win.

In the process, he has emerged as an ideological lightning rod in the debate over refugee politics in Germany, his journey highlighting the disconnect between the country’s image on refugee issues and the reality for many of those who seek asylum here.

German court ruled that aspects of the police’s handling of the Ellwangen raid were illegal. The court did not rule entirely in his favor — it said, for example, that his 2018 deportation to Italy was legal, and that people in refugee facilities like Ellwangen cannot expect the same privacy rights as ordinary citizens. But his case has spurred a re-examination of the treatment of the Ellwangen incident in the German news media, drawing more attention to the voices of the refugees involved.

Cases like Mr. Mfouapon’s remain rare, because few refugees want to stand up to the state for fear they will become targets, just as Mr. Mfouapon has.

Mr. Mfouapon returned to Germany in 2019. He and his wife split up, unable to move past the loss of their son. He has added German to his other language skills and, with the help of some activists involved in his petition, applied for and started a training program in media production last year.

He has also launched a refugee advocacy organization to continue drawing awareness to these issues. Speaking out about his experiences is important to him personally, but is also a way to cope with the trauma and loss he has faced.

“All these events in my life, all these things that were happening before — if you want to deal with them, the only way you can do it is to try to go forward,” he said. “To say, ‘I will be fighting for the people who are not yet in this situation, so that what’s happening will not happen to anyone else.’”

He believes Germany needs to re-examine its asylum policy, and is pushing for changes to the Dublin rule. With worsening conditions in his home country and many others, Mr. Mfouapon said, migration issues will only intensify in coming years — and governments like Germany’s need to be ready with better solutions.

About an hour outside of the capital city of San Juan, the sumptuous spread known as Hacienda Illusion is now on the market for $48 million. For a … END_OF_DOCUMENT_TOKEN_TO_BE_REPLACED

Kids at Hilton Aruba play with the resident birds. Hilton Aruba As summer nears, hotels around the world are making big changes and refreshing their … END_OF_DOCUMENT_TOKEN_TO_BE_REPLACED

In 1789, before the slave rebellion, the marquis bought 21 recently kidnapped Africans before leaving for France. But he didn’t indicate where they … END_OF_DOCUMENT_TOKEN_TO_BE_REPLACED