River Islands, the development where the Namayans hoped to live, is in Lathrop, Calif., which has a population of 25,000. It sits about a half-hour beyond Altamont Pass, whose rolling hills and windmills mark the border between Alameda and San Joaquin Counties. Though technically outside the Bay Area region, Lathrop’s farms and open fields have been steadily supplanted by warehouses and subdivisions as it and nearby cities have become bedroom communities for priced-out workers who commute to the Silicon Valley and San Francisco.

In Livermore, on the eastern side of Alameda County, the typical home value is nearing $1 million, according to Zillow. That falls to $500,000 to $600,000 over the hill in places like Tracy, Manteca and Lathrop. The catch, of course, is that many residents endure draining, multihour commutes.

The pandemic may have upended that economic order, in California and elsewhere. Thousands of families that could afford to do so fled cities last spring, and while some will return, others will not — particularly if they are able to continue to work remotely at least part of the time. One recent study estimated that after the pandemic, one-fifth of workdays would be “supplied remotely” — down from half during the height of the pandemic but far above the 5 percent before it.

If those trends hold, it will make it easier for many workers to live not just in farther-out towns like Lathrop but to abandon high-cost regions like the Bay Area altogether. Midsize cities that for years have tried — usually in vain — to recruit large employers through tax breaks can now attract workers directly.

To some extent, the pandemic accelerated a shift that was already taking place. When the housing bubble burst, members of the millennial generation were in their teens and 20s. Now the oldest of them are turning 40, and about half are married. They are hitting the milestones when Americans have traditionally moved to the suburbs. 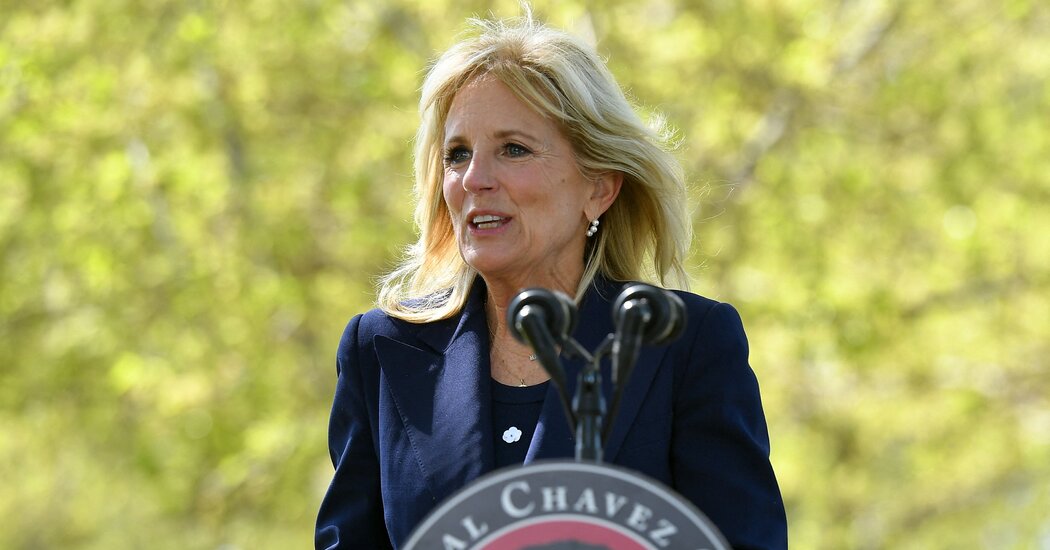 During her remarks, Dr. Biden said that the president supported the Farm Workforce Modernization Act, a bill that would grant temporary legal status to seasonal farmworkers, many of whom are undocumented, and offer a 10-year path to citizenship.

“As president, Joe is fighting for people who often go unseen,” Dr. Biden said. “And that’s exactly the kind of immigration policy he’s working to build — one that treats children and families with dignity and creates fair pathways to citizenship, including for essential workers.”

Thousands of Central Valley farmworkers have been scheduled to receive the coronavirus vaccine at Forty Acres over six weekends in March and April. Gov. Gavin Newsom of California, a Democrat, and his partner, Jennifer Siebel Newsom, joined the first lady on Wednesday at the site. Later, Dr. Biden handed out vaccination cards and “I got my Covid-19 vaccination” buttons to workers waiting to be immunized.

This year, California kicked off a landmark effort to get vaccines to farmworkers, many of whom are undocumented and whose working conditions in close quarters have left them particularly vulnerable to the virus. Researchers from Purdue University estimate that about 500,000 agricultural workers have tested positive for the virus, and at least 9,000 have died from it. The coronavirus has killed more than 551,000 people in the United States, according to a New York Times count.

Over President Biden’s first two months in office, union leaders have praised his administration as one of the most labor-friendly in modern history. One of his first official acts was to move a bust of Mr. Chávez into the Oval Office, a decision Dr. Biden pointed out to applause at the event on Wednesday. The first lady also frequently repeated the farmworkers’ union’s motto, “Sí, se puede,” or “Yes, we can,” several times during her speech.

“César dared to believe that our country could change — that we could change it,” she said. “Now, it’s on us to live up to that promise.”

A century-old mansion in Pittsburgh has undergone a serious overhaul. The end result is one of the most expensive single-family homes in the Steel … END_OF_DOCUMENT_TOKEN_TO_BE_REPLACED

ATLANTA, GEORGIA - OCTOBER 16: Ozzie Albies #1 of the Atlanta Braves celebrates after scoring the ... [+] winning run on a walk-off RBI single by … END_OF_DOCUMENT_TOKEN_TO_BE_REPLACED

Mr. Amess was also a vocal supporter of the Iranian opposition group Mujahedeen Khalq, or M.E.K., which campaigns for the overthrow of Iran’s … END_OF_DOCUMENT_TOKEN_TO_BE_REPLACED