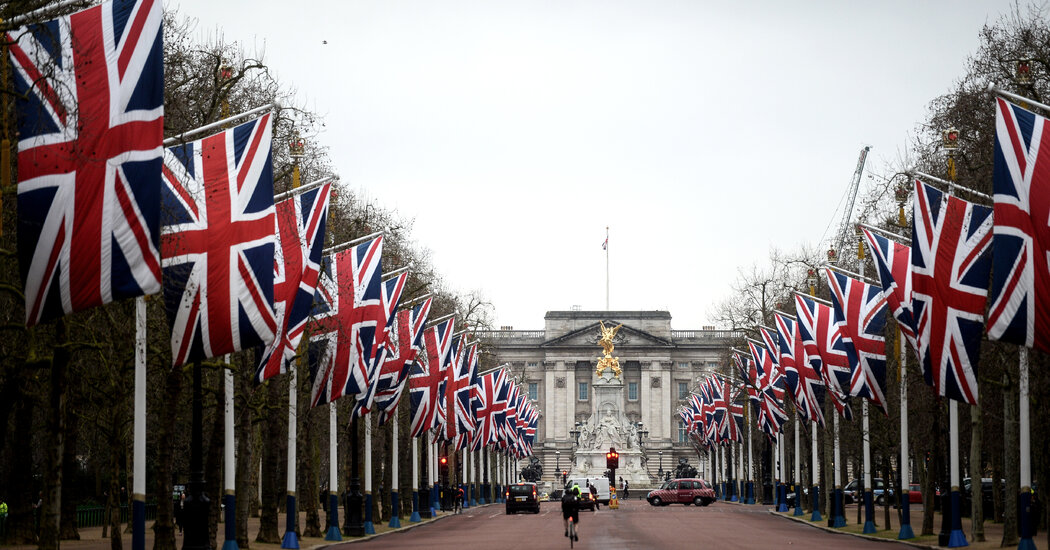 LONDON — It started last week when the host of the BBC’s morning show mocked a cabinet minister, Robert Jenrick, for the Union Jack hanging conspicuously behind him, next to a portrait of Queen Elizabeth II. The flag, the host cracked, was not “up to standard-size government interview measurements.”

The host, Charlie Stayt, and his co-host, Naga Munchetty, who chuckled along, were quickly in hot water. After the BBC came under fire for disrespecting the British flag, both were reprimanded. Ms. Munchetty apologized for liking “offensive” Twitter posts that joined in the mockery of the minister’s flag.

Never one to duck a culture-war skirmish, the Conservative government of Prime Minister Boris Johnson has seized on the flag flap to try to keep opponents on the defensive and the dissolution of the United Kingdom at bay.

On Wednesday, it decreed that, henceforth, the Union Jack should fly on all government buildings every day of the year, rather than simply on designated days. The only exception will be regional holidays when, say, the Scottish flag, the Saltire, would fly in Scotland on St. Andrew’s Day.

revised guidance on flags, noted that in the United States, the Stars and Stripes flies year-round, not just on federal buildings but also at schools and in front of polling places. Likewise in Australia, the national flag can be flown every day of the year from federal and state parliaments.

Britons tend to be less demonstrative about their flag than the citizens of their former colonies. Unlike Americans, they rarely hang it in front of their homes. The Union Jack arouses ambivalent emotions among some on the left, who associate it with Britain’s imperial past, and in parts of the United Kingdom, particularly Scotland, where pro-independence feelings run strong.

That, of course, is precisely the point for a government that is desperate to avert another referendum on independence for Scotland after elections there in May in which the Scottish National Party is expected to win a strong mandate.

was taken to task by a Conservative lawmaker, James Wild, for not publishing an image of the Union Jack in the broadcaster’s 268-page annual report.

“Do you find that surprising?” Mr. Wild asked, to which Mr. Davie replied, “No, I think that’s a strange metric.”

A former marketing executive who was chosen because of his ability to get along with the government, Mr. Davie pointed out that the BBC promotes Britain worldwide. The Union Jack, he said, flew proudly from its London headquarters.

Critics on Twitter lost no time lampooning the new reverence for the flag. They coined an off-color hashtag and attributed it to unhealthy nationalism, post-Brexit insecurity or cynical politics.

“This may be very ‘20th Century’ of me,” posted Simon Fraser, formerly the senior civil servant at the Foreign Office, “but I do worry when politicians start getting obsessive about flags.”

Clare Hepworth, a trade unionist, quoted Bill Moyers, a broadcaster and former aide to President Lyndon B. Johnson, who once said of politicians who brandish flags, “They’re counting on your patriotism to distract you from their plunder.”

And, of course, it was another Johnson, Samuel, who in the 18th century famously said, “patriotism is the last refuge of the scoundrel.”

At a time when the government is winning broad public support for its coronavirus vaccine rollout — the country’s largest mass mobilization since World War II — a manufactured row over flags might seem unnecessary.

proposing to air two beloved patriotic songs without their lyrics because they evoked a colonial past that is at odds with the values of the Black Lives Matter movement.

outfitted at a reported cost of 2.6 million pounds, or about $3.5 million. He will be flanked by no fewer than four Union Jacks.

By then, Mr. Robson had in fact made two friends, both Irishmen working for Victorian Railways. They decided to pretend he was a mainframe computer, … END_OF_DOCUMENT_TOKEN_TO_BE_REPLACED

Denmark on Wednesday became the first country to plan to permanently stop administering the AstraZeneca vaccine, a month after suspending its use … END_OF_DOCUMENT_TOKEN_TO_BE_REPLACED