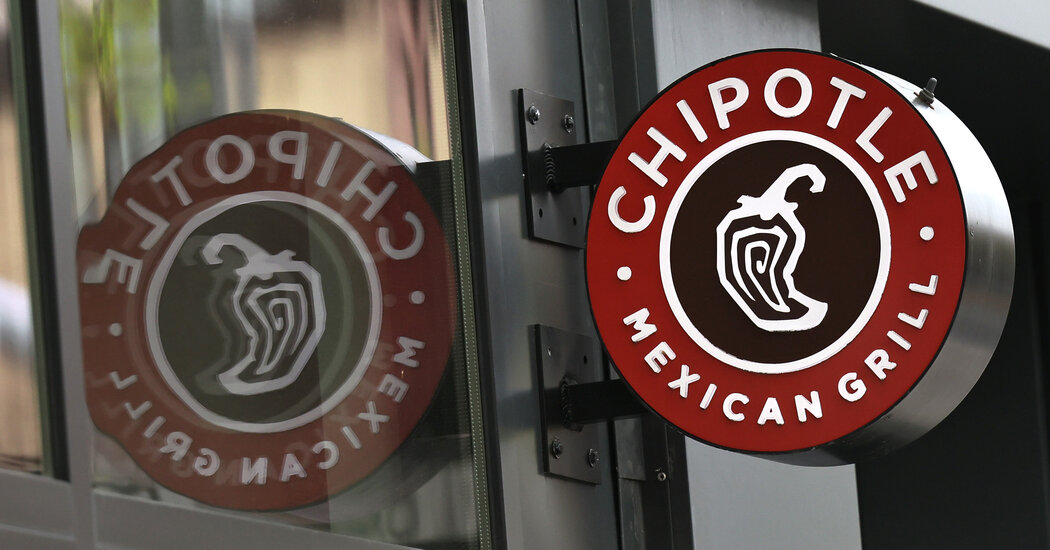 Hoping to attract more employees, Chipotle said on Monday that it was increasing its wages to an average of $15 an hour by the end of June.

The fast-food chain, which is looking to hire 20,000 employees for its peak season and to staff the more than 200 restaurants it plans to open this year, said the wage increase would result in hourly workers making between $11 and $18 an hour.

Chipotle is the latest restaurant chain to raise wages or offer incentives as it struggles to staff its restaurants. As coronavirus vaccinations have increased and government restrictions eased, the restaurant industry, which laid off or furloughed millions of employees during the pandemic, suddenly went on a hiring spree, as did several other service-related industries.

That sudden high demand for restaurant workers has been tough to meet. Some potential employees, whether concerned about the safety of serving customers dining indoors or buoyed by government stimulus checks, are wary of returning to work.

report released last week showed a significant jump in the number of workers hired in the restaurant and bar sector, but employment levels at full-service restaurants in February remain 20 percent lower than a year ago, according to the National Restaurant Association. That’s the equivalent of 1.1 million jobs. Employment at fast-food and fast-casual restaurants was down 6 percent over the same period.

Raising the minimum wage to $15 an hour has been one of the items on the agenda of President Biden. An attempt to add the provision to the pandemic relief bill signed in March failed after Congress removed it from the package.

At the time, the restaurant industry had argued that a wage increase would imperil the recovery for the industry because it would result in higher prices and mean not as many workers could be hired.

Now, struggling to attract candidates, Chipotle is not only raising its hourly wages, it is offering referral bonuses for crew members and managers. 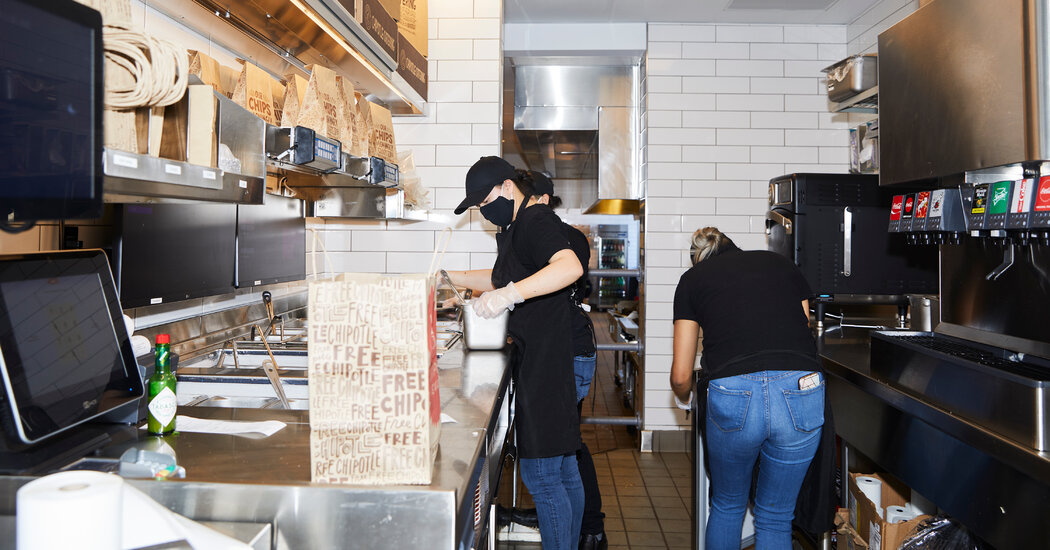 New York City on Wednesday sued the fast-food giant Chipotle Mexican Grill over what it says are hundreds of thousands of violations of a fair scheduling law at several dozen stores.

Workers are owed over $150 million in relief for the violations, according to the complaint, and financial penalties could far exceed that amount, making it the largest action the city has brought under the law.

The allegations cover the period from November 2017, when the law took effect, to September 2019, when the city filed an initial suit involving a handful of Chipotle stores. The new complaint, filed by the Department of Consumer and Worker Protection at the Office of Administrative Trials and Hearings, said that Chipotle had made some attempt to comply with the law since 2019, but that violations were continuing.

can exact a large physical and emotional toll on workers and their children.

Under the law, fast-food employers must provide workers with their schedules at least 14 days in advance — or, if not, obtain written consent for them and pay them a premium for the shifts.

Employers must also provide workers with at least 11 hours between shifts on consecutive days or obtain written consent and pay them $100. The hope is to discourage the practice of forcing workers to work late into the evening and then help open a store in the morning, known as “clopening.”

The provision requiring employers to offer workers additional shifts before hiring new workers was intended to make it easier for workers to earn enough income to sustain themselves.

The complaint also accuses the company of violating the city’s paid sick leave law, which was enacted in 2014 and mandated up to 40 hours of paid leave per year. (The ceiling grew to 56 hours beginning this January for larger employers.) The city contends that Chipotle illegally denied requests for time off, required workers to find their own replacements or did not pay workers for time they took.

According to the complaint, all of the estimated 6,500 Chipotle employees in New York City from November 2017 to September 2019 were affected by violations involving scheduling and sick leave, and on average they experienced more than three scheduling violations a week.

became sick after eating at Chipotle restaurants in 2015 and 2016, some from E. coli bacteria, leading to a sharp decline in the company’s stock price and threatening the image it had cultivated as a purveyor of “food with integrity.”

Last year, Chipotle was fined nearly $1.4 million over accusations that it regularly violated Massachusetts child labor laws from 2015 to 2019. The company settled the case without admitting violations.

But the company has posted solid sales growth during the pandemic, with revenue of $6 billion last year, and its stock price has soared.

According to the New York City complaint, Chipotle frequently violated the law by either destroying or failing to maintain or produce records attesting to its scheduling policies.

“Chipotle failed to produce certain categories of scheduling information the department requested, in part because it had destroyed paper schedule records,” the complaint states. “However, the evidence Chipotle did produce, as well as evidence that employees provided, shows that Chipotle did not begin to implement key elements of the Fair Workweek Law in any of its New York City locations until approximately September 2019.” 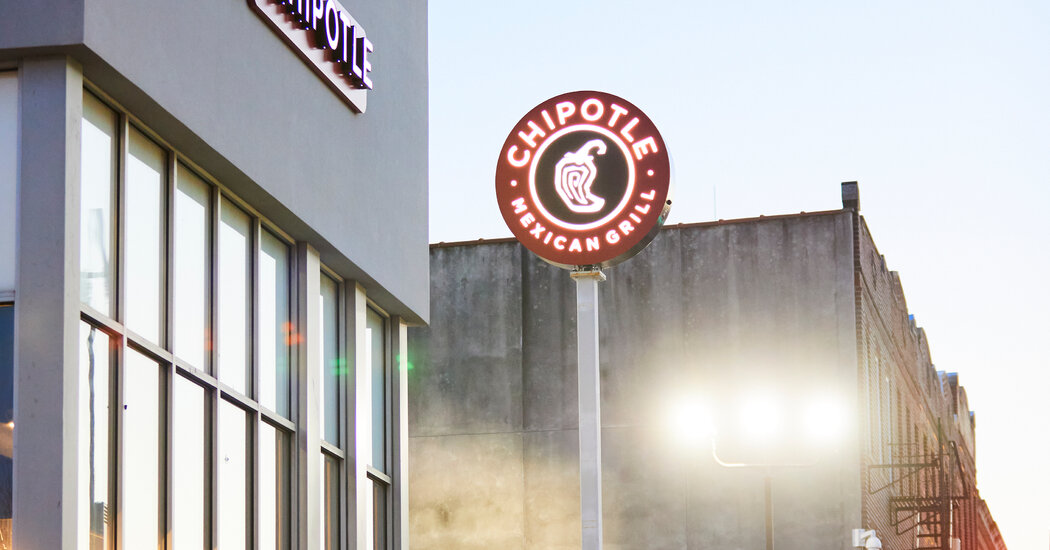 Starbucks has employees at hundreds of busy locations strolling through car lines, taking orders with hand-held devices so customers can get their caffeine fix a few seconds faster. Shake Shack, which has long emphasized that quality ingredients are worth waiting a few extra minutes for, will soon feature its first drive-through window. And the vast majority of new Chipotles this year will have “Chipotlanes,” where customers can drive up to a window and pull away with preordered meals in less than a minute.

With dining room restrictions in place for much of the country during the pandemic, drive-through and pickup windows became critical ways for a variety of restaurants to remain afloat.

Now, as the dining industry looks toward a post-pandemic world, many companies are betting big that digital ordering and drive-throughs will remain integral to their success. And the basic experience of sitting in a single line of cars, speaking into a sometimes garbled intercom and pulling up to window to pay for your food before driving away is poised to be demonstrably altered for the first time in decades.

has been sued by neighboring businesses that say its long drive-through lines block their customers’ access.

For most restaurants, the solution has many parts. First, more are trying to encourage customers to use ordering apps, which improve the accuracy of orders and are often connected to loyalty programs that give them points for free food. They are also trying to figure out how to best speed consumers through the drive-through or pickup process without disrupting traffic patterns or other businesses.

Drive-through times average 4 minutes and 15 seconds, according to Bluedot, a geolocation company. Like a Daytona 500 pit crew, restaurants are always looking for ways to shave off minutes, or even seconds.

To be competitive in this race, Chipotle, whose digital orders soared from 20 percent of its sales to as high as 70 percent at the height of the pandemic, installed in many of its kitchens a second assembly line where employees put together tacos or burrito bowls for mobile and online orders exclusively.

The chain also expects that 70 percent of its restaurants that open this year will have the dedicated Chipotlanes for online orders.

Others, like McDonald’s and Burger King, are adding multiple drive-through lanes, which have been a feature at some busy fast-food spots like Chick-fil-A but are becoming more commonplace. Burger King is running three-lane tests in the United States, Brazil and Spain. In the U.S. and Spain, the third lane is “express” for advance orders made through the app. In Brazil, the lane takes delivery drivers to a pickup area with food lockers or shelves.

Burger King is also looking to propel its drive-throughs into the future with a Big-Brother-like artificial intelligence system, Deep Flame.

Right now, roughly half of Burger King’s drive-throughs with digital menu boards are using Deep Flame’s technology to suggest foods that are particularly popular in the area that day. It also uses outside factors, like the weather, to highlight items like an iced coffee on a hot day.

But this year, Burger King is testing a Bluetooth technology that will be able to identify customers in Burger King’s loyalty program and show their previous orders. If a customer ordered a small Sprite and a Whopper with cheese, hold the pickles, the last three visits, Deep Flame will calculate that chances are high that the customer will want the same order again.

It’s unclear whether the technology pays off. McDonald’s is moving in a similar direction. The fast-food giant acquired the Israeli artificial intelligence firm Dynamic Yield in 2019 with an eye toward boosting sales by providing personalized digital promotions to customers.

Restaurant Brands International — the parent company of Burger King, Tim Hortons and Popeyes — hopes to have the predictive personalized systems at more than 10,000 of its restaurants’ locations across North America by mid-2022.

“We’re taking what was an outdated, old, static sales channel and bringing it to the forefront of the industry,” said Duncan Fulton, the chief corporate officer for Restaurant Brands International. Now, customers can have the “the ability to automatically reorder things and pay for the items at the board, which, ultimately, speeds up the window time, allowing you to collect your food and go on your way.”

The reality is somewhat more complex. Israel’s Supreme Court is weighing the claims of a Jewish organization that has legal title to the Sheikh Jarrah … END_OF_DOCUMENT_TOKEN_TO_BE_REPLACED