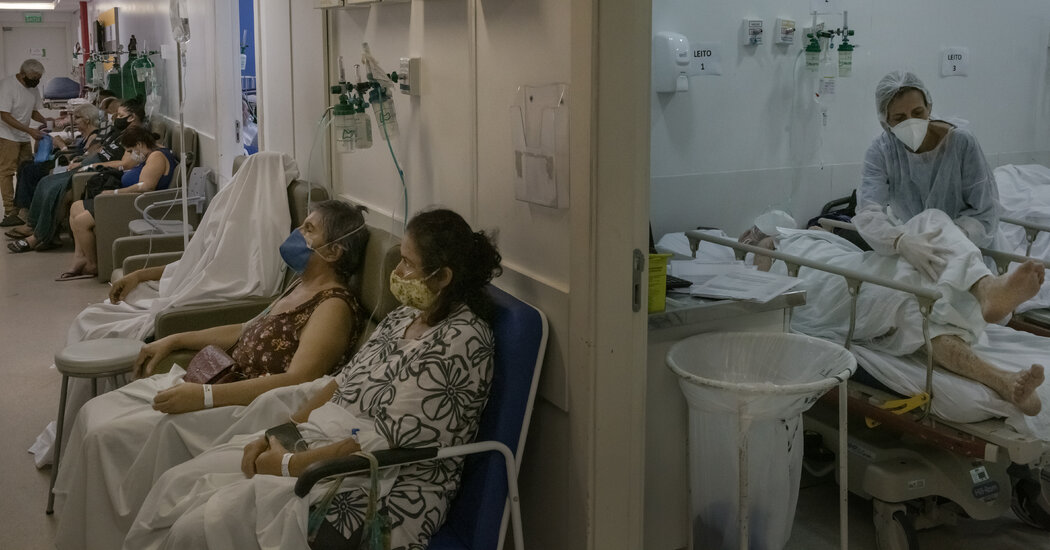 The virus has killed more than 300,000 people in Brazil, its spread aided by a highly contagious variant, political infighting and distrust of science.

PORTO ALEGRE, Brazil — The patients began arriving at hospitals in Porto Alegre far sicker and younger than before. Funeral homes were experiencing a steady uptick in business, while exhausted doctors and nurses pleaded in February for a lockdown to save lives.

But Sebastião Melo, Porto Alegre’s mayor, argued there was a greater imperative.

“Put your life on the line so that we can save the economy,” Mr. Melo appealed to his constituents in late February.

Now Porto Alegre, a prosperous city in southern Brazil, is at the heart of an stunning breakdown of the country’s health care system — a crisis foretold.

More than a year into the pandemic, deaths in Brazil are at their peak and highly contagious variants of the coronavirus are sweeping the nation, enabled by political dysfunction, widespread complacency and conspiracy theories. The country, whose leader, President Jair Bolsonaro, has played down the threat of the virus, is now reporting more new cases and deaths per day than any other country in the world.

125 Brazilians succumbing to the disease every hour. Health officials in public and private hospitals were scrambling to expand critical care units, stock up on dwindling supplies of oxygen and procure scarce intubation sedatives that are being sold at an exponential markup.

Intensive care units in Brasília, the capital, and 16 of Brazil’s 26 states report dire shortages of available beds, with capacity below 10 percent, and many are experiencing rising contagion (when 90 percent of such beds are full the situation is considered dire.)

a model for other developing nations, with a reputation for advancing agile and creative solutions to medical crises, including a surge in H.I.V. infections and the outbreak of Zika.

Mr. Melo, who campaigned last year on a promise to lift all pandemic restrictions in the city, said a lockdown would cause people to starve.

celebrated setbacks in clinical trials for CoronaVac, the Chinese-made vaccine that Brazil came to largely rely on, and joked that pharmaceutical companies would not be held responsible if people who got newly developed vaccines turned into alligators.

“The government initially dismissed the threat of the pandemic, then the need for preventive measures, and then goes against science by promoting miracle cures,” said Natália Pasternak, a microbiologist in São Paulo. “That confuses the population, which means people felt safe going out in the street.”

Terezinha Backes, a 63-year-old retired shoemaker living in a municipality on the outskirts of Porto Alegre, had been exceedingly careful over the past year, venturing out only when necessary, said her nephew, Henrique Machado.

But her 44-year-old son, a security guard tasked with taking the temperature of people entering a medical facility, appears to have brought the virus home early this month.

Ms. Backes, who had been in good health, was taken to a hospital on March 13 after she began having trouble breathing. With no beds to spare, she was treated with oxygen and an IV in the hallway of an overflowing wing. She died three days later.

“My aunt was not given the right to fight for her life,” said Mr. Machado, 29, a pharmacist. “She was left in a hallway.”

anti-parasite drug ivermectin as a preventive measure. The drug is part of the so-called Covid kit of drugs, which also includes the antibiotic azithromycin and the anti-malaria drug hydroxychloroquine. Mr. Bolsonaro’s health ministry has endorsed their use.

Leading medical experts in Brazil, the United States and Europe have said those drugs are not effective to treat Covid-19 and some can have serious side effects, including kidney failure.

“Lies,” Mr. Monteiro, 63, said about the scientific consensus on the Covid kit. “There are so many lies and myths.”

He said medical professionals have sabotaged Mr. Bolsonaro’s plan to rein in the pandemic by refusing to prescribe those drugs more decisively at the early stages of illness.

“There was one solution: to listen to the president,” he said. “When people elect a leader it is because they trust him.”

The mistrust and the denials — and the caravans of Bolsonaro supporters blasting their horns outside hospitals to protest pandemic restrictions — are crushing for medical professionals who have lost colleagues to the virus and to suicide in recent months, said Claudia Franco, the president of the nurses union in Rio Grande do Sul. 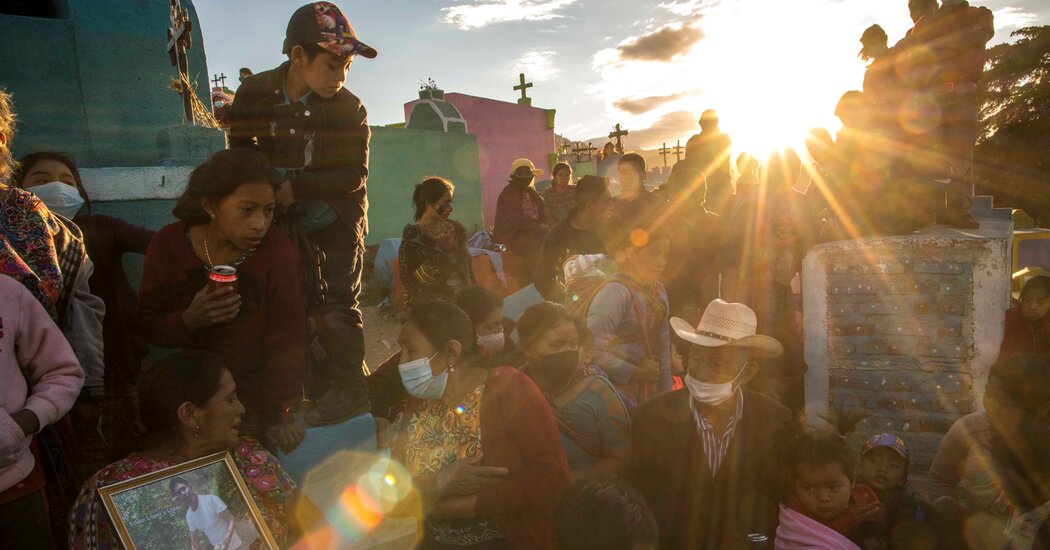 The trek from Central America to U.S. soil has always been perilous, but a massacre with many victims from one corner of Guatemala has shaken that country.

They leave behind homes, families, everything they have known, taking their chances on a dangerous trek north toward an uncertain future, driven by poverty, lack of opportunity and the hope of something better.

For most migrants who leave Central America, like those from the municipality of Comitancillo, in the mountains of western Guatemala, the goal is to reach the United States, find work, save some money and send some back home, put down roots, maybe even find love and start a family. Usually, the biggest obstacle is crossing the increasingly fortified American border without being caught.

A group of 13 migrants who left Comitancillo in January didn’t even get the chance. Their bodies were found, along with those of six other victims, shot and burned; the corpses were piled in the back of a pickup truck that had been set on fire and abandoned in the Mexican state of Tamaulipas, just shy of the U.S. border. A dozen state police officers have been arrested in connection with the massacre.

The migrants’ remains made the return trip on Friday, March 12, each in a coffin draped with the Guatemalan flag, flown to a military airport in Guatemala City. A somber repatriation ceremony there, with an address by President Alejandro Giammattei, was shown live on national television. Relatives, friends and neighbors in Comitancillo watched the broadcast in their homes as they made final preparations for the arrival of the bodies and for the wakes and burials to follow.

a raid on the factory where he worked. He was held in detention for most of a year, trying to fight deportation.

He stayed in touch with Reverend Medina. “He was always trying to organize groups to pray and have faith and keep strong,” the priest recalled.

Mr. López finally lost his legal battle, however, and was deported to Guatemala in 2020, Reverend Medina said. Desperately missing his family, he decided in January to try his luck again and migrate north for a third time, the reverend said.

Last Saturday, relatives attended a wake for Mr. López in his parents’ home. The funeral service was held in a church in the village of Chicajalaj, the construction of which he had helped fund by raising money among the Guatemalan diaspora in Mississippi.

Above, relatives held wake for Mr. López. During a procession, below, carrying Mr. López’s remains to the church and then to a cemetery, his cousin, Sebastián López, 75, clutched a framed portrait of his dead relative.

Mr. López’s daughter, Evelin López, left a can of Coca-Cola, a favorite drink of his, as a tribute inside his tomb. It was her first trip to Guatemala.

In the home of Santa Cristina García Pérez, 20, another massacre victim, family members had adorned an altar with framed photos, flowers and a bottle of water — so that Ms. García’s spirit did not suffer from thirst on its journey to the next life, her father, Ricardo García Pérez, explained.

Before she migrated, Mr. García said, his daughter had been living for three years in the city of Zacapa, on the other side of the country, holding a series of low-paying jobs, including as a house cleaner and as a saleswoman in stores.

One of 11 siblings, Ms. García hoped to make enough money in the United States to cover the cost of an operation for her one-year-old sister, Angela Idalia, who was born with a cleft lip, her father said.

She wanted to save Ángela Idalia from what she thought would be a life of ridicule, relatives said.

Ms. García had hoped to make it to Miami, where a friend was living, “but unfortunately her life was cut short on the way,” her father said.

“The saddest thing in life,” he continued. “There’s no explanation.”

Relatives gathered at the mass for Ms. García and two other victims, Iván Gudiel Pablo Tomás and Rivaldo Danilo Jiménez, all of them from the village of Tuilelén.

The killings have stunned the community, spurred a wave of international media attention on Comitancillo and an outpouring of financial support for the victim’s families. Among other acts of largess, donations from nearby communities in the region and from the Guatemalan diaspora have paid for Ángela Idalia’s first surgery to repair her cleft lip and have enabled the García family to build a new house.

Yet local residents predict that despite the massacre, migration from Comitancillo to the United States will not ebb.

Residents said that President Biden’s election and his promise of a more humane approach to migration policy had inspired many young Comitecos to set off for the United States in the past few months. Many others are thinking about leaving soon, residents said.

The options for employment in Guatemala are too scarce, Ms. Aguilón said, and the lure of possibility in the United States too great.

“For us, it was a very big blow,” she said of the massacre. “But this won’t prevent the people from migrating.”

Mr. Jiménez’s coffin being carried to Tuilelén cemetery, above, and friends and relatives carrying the coffin of Mr. Pablo.

When Graham Brooks received his ballot in early February, asking whether he wanted to form a union at the Amazon warehouse in Alabama where he works, … END_OF_DOCUMENT_TOKEN_TO_BE_REPLACED

QuantumScape could pursue legal action after coming under assault in a scathing report released by activist short-seller Scorpion Capital."We're … END_OF_DOCUMENT_TOKEN_TO_BE_REPLACED