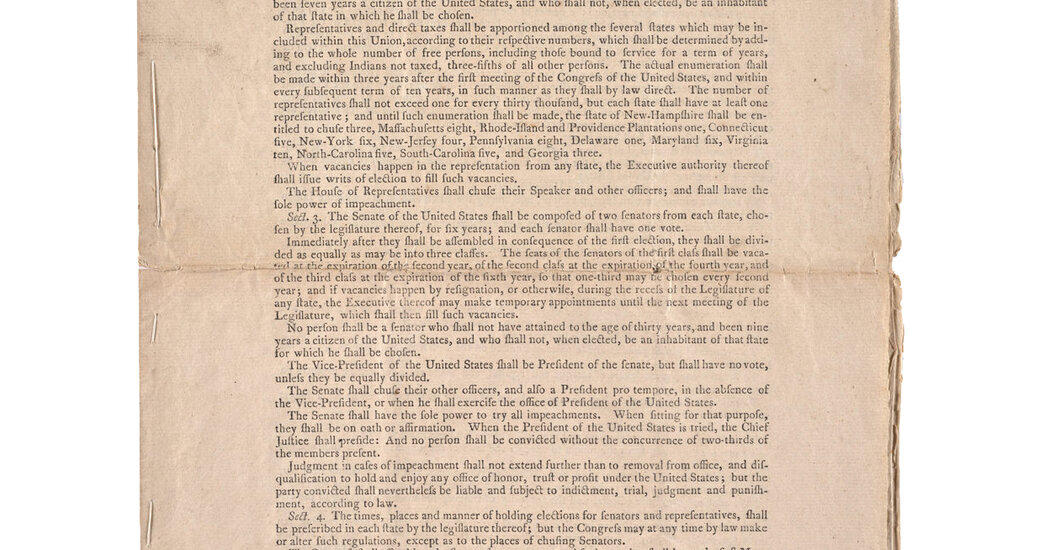 “We’re going to stop it from going into more private hands and actually open-source it, make it a public good,” said Alice Ma, one of the organizers.

In truth, ConstitutionDAO is more a symbolic gesture to decentralization technology than a real-world demonstration of it. Some in the group had initially hoped to make participants fractional owners of the Constitution, but that plan fell apart, possibly because it could run afoul of securities laws. The current plan is to issue crypto tokens, called $PEOPLE, that will entitle participants to vote on certain decisions governing the Constitution’s use, but won’t confer any actual ownership.

In addition, since Sotheby’s accepts only government-issued currency and doesn’t allow DAOs to bid on auctions directly, the group plans to work with a crypto exchange that will convert its Ether to dollars before the bid, and a crypto nonprofit that will place the bid on the group’s behalf. According to the group’s FAQ document, a limited liability corporation will take control of the Constitution temporarily while the DAO figures out a long-term ownership structure.

Many DAOs are speculative in nature; investors buy in hoping that the assets the group acquires will be worth more later on. But ConstitutionDAO’s organizers say making money is not a goal.

“No one is talking about anything related to speculation,” said Will Papper, a San Francisco crypto entrepreneur who is helping to organize the bid. “Everyone’s talking about how we should steward the Constitution.”

Well, that and about a million other things. A spin through the group’s Discord server on Tuesday revealed a torrent of chaotic chatter, debates over fine print and a shocking number of memes involving Nicolas Cage. (Mr. Cage starred in a movie about a plot to steal the Declaration of Independence, which appears to be close enough to the Constitution for the group’s taste.)

There was an audio channel where a man read the entire Constitution, line by line, over a soundtrack of soothing hip-hop beats. There were channels filled with questions for the organizers, which ranged from boring (“Has the L.L.C. structure been run by a tax advisor?”) to intriguing (“Is there a safeguard to make sure the DAO doesn’t vote to eat the constitution? Or other method of destruction?”)

A Falcon 9 rocket launches the GPS III SV05 satellite on a mission for the U.S. Space Force on June 17, 2021.SpaceXElon Musk's SpaceX broke its own … END_OF_DOCUMENT_TOKEN_TO_BE_REPLACED

The "Dog Whisperer" is also a real estate whiz.Canine trainer Cesar Millan has quickly found a buyer for his $4 million Encino, CA, residence. The … END_OF_DOCUMENT_TOKEN_TO_BE_REPLACED