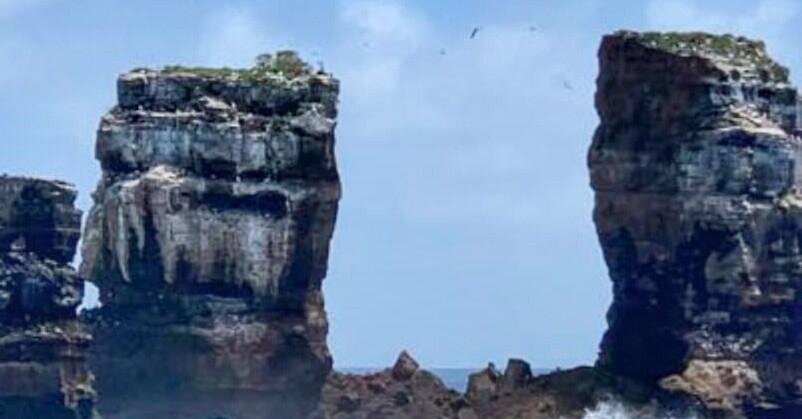 The collapse of the natural archway in the Pacific Ocean, about 600 miles west of continental Ecuador, left a pile of rubble between two pillars.

one of the world’s most vulnerable places to the effects of climate change.

The islands sit at the intersection of three ocean currents and are vulnerable to the El Niño weather system, which causes rapid warming of Pacific Ocean waters. The warming waters threaten the very species that Darwin observed.

Easter Island, also in the Pacific Ocean, stands to be eroded by rising waters, threatening its residents and famed moai statues now within the reach of waves.

The Galápagos, once a destination for only well-off travelers unfazed by the islands’ remote location, had seen an increase in tourism before the coronavirus pandemic, with visitor numbers jumping 90 percent between 2007 and 2016. That has concerned some conservationists, who worried the extra visitors would put pressure on the islands’ infrastructure and encroach on animal habitats.

expressed concern about the influx of tourists, saying they could harm not just the wildlife but the islands’ landscapes and beaches. And then there’s the misbehavior: In March, officials at an airport seized 185 baby tortoises wrapped in plastic and packed into a suitcase headed for continental Ecuador.

About an hour outside of the capital city of San Juan, the sumptuous spread known as Hacienda Illusion is now on the market for $48 million. For a … END_OF_DOCUMENT_TOKEN_TO_BE_REPLACED

Kids at Hilton Aruba play with the resident birds. Hilton Aruba As summer nears, hotels around the world are making big changes and refreshing their … END_OF_DOCUMENT_TOKEN_TO_BE_REPLACED

In 1789, before the slave rebellion, the marquis bought 21 recently kidnapped Africans before leaving for France. But he didn’t indicate where they … END_OF_DOCUMENT_TOKEN_TO_BE_REPLACED