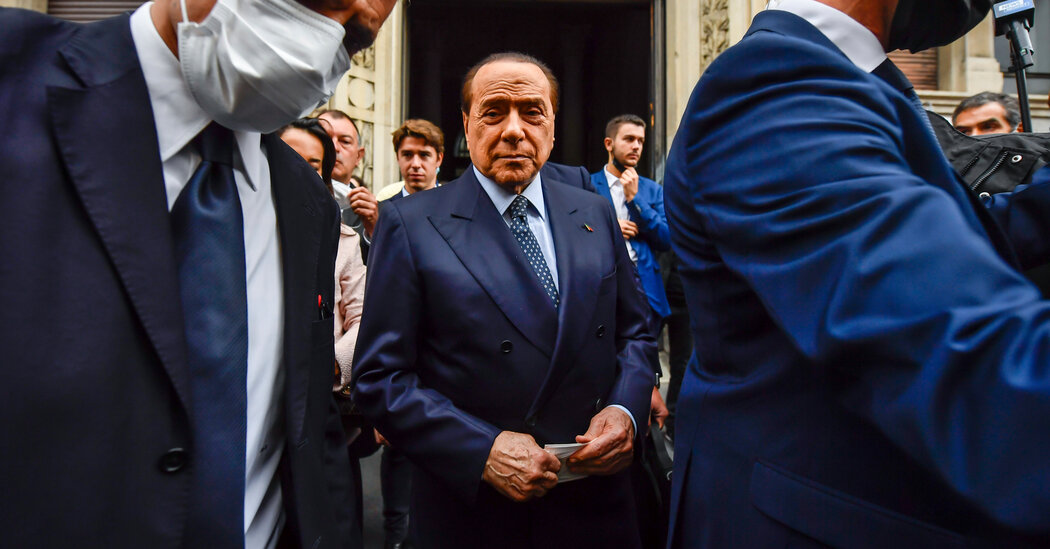 ROME — Early this month, Silvio Berlusconi sat at a dining room table in his mansion with his girlfriend, more than a half-century younger, and an old political ally. As they feasted on a pumpkin souffle and truffle tagliatelle, the 85-year-old Italian former prime minister and billionaire made hours of phone calls, working his way down a list of disaffected lawmakers he hoped to persuade to elect him president of Italy next week.

“‘We are forming the Bunga Bunga party and we want you with us,’” Christian Romaniello, a lawmaker formerly with the anti-establishment Five Star Movement, recounted Mr. Berlusconi as saying, referring to the sex-fueled bacchanals that Mr. Berlusconi has deemed merely “elegant dinners.” According to Mr. Romaniello, Mr. Berlusconi then added, “‘But I’ll bring the ladies.’”

The Italian presidency, the country’s head of state, is a seven-year position usually filled by a figure of unimpeachable integrity and sobriety whose influence flows from moral authority. The current holder, Sergio Mattarella, is a quiet statesman whose brother was murdered by the mob. Another contender is Mario Draghi, the prime minister and a titan of European politics who has led the country to a period of unusual stability.

Then there is Mr. Berlusconi, who despite his recent bad health, waxen appearance and weakened political standing, is making an unabashed push to win a career-culminating position that he hopes will wash away decades of stains — his allies say unjustly thrown mud — and rewrite his legacy.

mob links and bribing lawmakers; the tax fraud conviction; the ban from office; the sentence to perform community service in a nursing home; his use of his media empire for political gain; his use of the government to protect his media empire; the wiretapped conversations of his libertine party guests regaling the Caligulan extent of his bunga bunga debaucheries; his close relationship with the Russian president, Vladimir V. Putin, who gifted Mr. Berlusconi a large bed; his appraisal of Barack Obama as “young, handsome and sun tanned”; his comparing a German lawmaker to a concentration camp guard; his second wife’s divorcing him for apparently dating an 18-year-old.

Mr. Berlusconi’s conflicts of interest, judicial problems and past behavior made him less than an excellent candidate, said Emma Bonino, a veteran Italian politician and civil rights activist who once ran for the office herself. “I don’t think he would give a good image of our country in the world,” she said.

Mr. Berlusconi declined to comment for this article. But he and his team of longtime advisers are selling him as a moderate, pro-European champion of democracy and can-do capitalism. “I think Silvio Berlusconi can be useful to the country,” Mr. Berlusconi, speaking of himself in the third person, said in October.

In usual fashion, he is using all the levers at his disposal to reach the requisite majority of 505 votes in the secret balloting for the presidency among lawmakers that starts on Monday.

read the headline) and published an insert on his qualities (“hero of liberty”). Weeks ago, lawmakers opening their mailboxes found a photograph of Mr. Berlusconi, arms up and bathing in adoration, on the cover of an anthology of his speeches.

the great-grandfather has remained the father figure of the center-right, which now has — if united — the largest bloc of lawmaker electors in Parliament and a strong desire to choose the next president.

But Mr. Berlusconi’s insistence has caused a major headache for Matteo Salvini, the leader of the nationalist League party, both at work and at home. Mr. Salvini’s girlfriend is the daughter of Denis Verdini, one of Mr. Berlusconi’s closest advisers, who is publicly applying pressure — from house arrest after his conviction in a bankruptcy fraud case — to elect Mr. Berlusconi.

After years of promising Mr. Berlusconi that he would back his candidacy for president, Mr. Salvini sent a stinging message to Mr. Berlusconi this week, saying that, “We must verify if Berlusconi has the numbers before the start of voting next week.” Mr. Salvini indicated that he had somebody else in mind.

Giorgia Meloni, the hard-right leader of Brothers of Italy, the third party in the center-right alliance, spoke on Tuesday of the possibility of Mr. Berlusconi’s stepping aside, prompting speculation that he might drop out.

the cover of Espresso magazine.

For all Mr. Berlusconi’s seeming unsuitability to fill the role of head of state, his allies argue that Italians elected him multiple times, that political considerations motivated the magistrates who hounded him for decades and that he was a self-made and brilliant businessman who built an empire.

But his outsize appetites and self-interested use of power fueled a backlash that seeded and grew the enormous anti-establishment Five Star Movement, co-founded by the comedian Beppe Grillo, who once derided Mr. Berlusconi as a “psychotic dwarf.”

Five Star took power in 2018 as Italy’s leading party, and Mr. Berlusconi’s support dwindled. He took a back seat to the rising nationalists, first Mr. Salvini and then Ms. Meloni, and railed against Five Star as incompetent good-for-nothings and a threat to democracy. He mocked their trademark universal welfare plan as a joke. He called their power structure communist.

Five Star has since imploded and scattered members into a mixed group of lawmakers desperate to avoid new elections that would almost certainly cost them their jobs and pensions. Mr. Berlusconi has explicitly promised to keep the legislature going as president, has called the universal income plan good for the poor and showered gifts on former rivals.

Luigi Di Maio, the Five Star leader who once refused to join any government with Mr. Berlusconi, this Christmas accepted a centuries-old oil painting of Venice from the mogul’s collection, according to a person close to Mr. Di Maio, who declined to comment.

As Mr. Berlusconi worked the phones alongside his girlfriend, who is also a member of Parliament in his political party, he sat next to Vittorio Sgarbi, one of his former ministers and a lawmaker and television personality who is well liked by many Five Star members.

When Mr. Sgarbi called Mr. Romaniello, the former Five Star lawmaker, who was interrupted while making Carnevale masks with his two small children, he jokingly introduced Mr. Berlusconi as “a Grillo-following friend.”

In an interview, Mr. Romaniello said that he was flattered by the call and added that friends contacted by Mr. Berlusconi also respected the former prime minister’s phone banking and “positive charisma.” But Mr. Romaniello said that he still considered himself, politically, “an adversary,” adding that Five Star had been born “as the antithesis of Berlusconi.” A phone call, he said, would not win his vote.

By Tuesday, even Mr. Sgarbi had bailed on Mr. Berlusconi and was urging him to be a kingmaker.

“I don’t think he can do it,” he said in an interview, saying that the duo had only persuaded about 15 lawmakers to back him, far short, even if he had a base of about 450 conservative supporters, to win the election. “It’s useless to try if you don’t have the numbers.”

On Wednesday, as Mr. Berlusconi’s lawyers in Milan successfully argued for a delay in a bribery trial related to his bunga bunga tribulations until after the presidential vote, his team snapped back and vowed that he would persist and, as always, speak for himself.

“I will not disappoint those who have trusted me,” Mr. Berlusconi said. 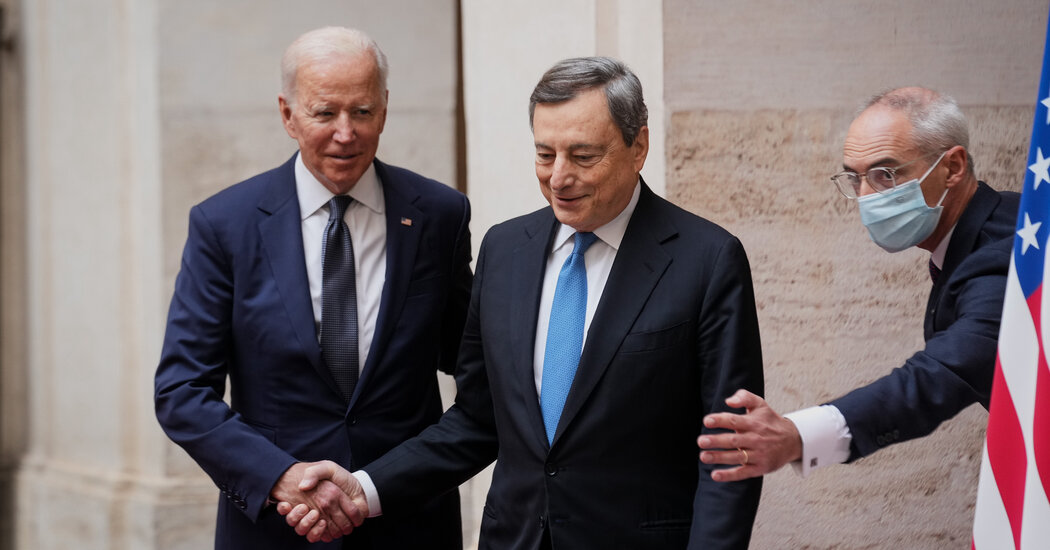 The secrecy, and self-interested nature, of the vote makes it ripe for influence peddling. In recent days, opening gambits took the form of government-collapsing ultimatums, with Mr. Berlusconi saying that he would pull his party out of government if Mr. Draghi became president.

Secret negotiations between the nationalist League, led by Matteo Salvini, and the center-left Democratic Party, are already underway, with the aim of avoiding new elections, possibly by keeping Mr. Draghi as prime minister of a government consisting of political leaders rather than technocrats.

Many, though perhaps not Mr. Draghi, are hoping that after sufficient votes fail to materialize for presidential hopefuls in opening ballots, a reluctant Mr. Mattarella, 80, can be persuaded by a broad alliance to serve another term, or at least to stick around for a couple more years and leave a new term early.

In theory, that would allow Mr. Draghi to defer his dream job until after the vital recovery fund programs have been put in place. But a year or two is an eternity in constantly evolving Italian politics.

Mr. Draghi, no political neophyte, has added his own pressure, asking the political parties if it was at all imaginable for a government that splinters on the choice of a president — be it him or anyone else — to “come back together magically” to run the country.

But even Mr. Draghi has not been untarnished by the political sniping. His backers say that he has become a more politically cautious broker between the bickering parties than their firm leader. In his most recent news conference, the prime minister sounded defensive, insisting that he was the one really making decisions. His honeymoon period seems to have ended.

“There is a lot of noise in the system because of this presidential race,” Mr. Colao said, nevertheless acknowledging that political pressure had “on the margins” increased the urgency of getting modernizing projects into the pipeline.

MUSCATINE, Iowa--(BUSINESS WIRE)--HNI Corporation (NYSE: HNI) announced today its Board of Directors declared a quarterly dividend of 32 cents per … END_OF_DOCUMENT_TOKEN_TO_BE_REPLACED

If you’re superstitious, today is your day.That's because it's Friday the 13th (the only one of the year, in fact). It's a day when bad juju reigns … END_OF_DOCUMENT_TOKEN_TO_BE_REPLACED

CHARLOTTE, NORTH CAROLINA - OCTOBER 20: Chris Duarte #3 of the Indiana Pacers defends Gordon Hayward ... [+] #20 of the Charlotte Hornets during their … END_OF_DOCUMENT_TOKEN_TO_BE_REPLACED