Some of the animatronics at Disney’s parks have been doing their herky-jerky thing since the Nixon administration. The company knows that nostalgia won’t cut it with today’s children.

GLENDALE, Calif. — I was en route to meet Groot.

Not an imitation Groot conjured with video or those clunky virtual reality goggles. The Walt Disney Company’s secretive research and development division, Imagineering, had promised a walking, talking, emoting Groot, as if the arboreal “Avengers” character had jumped off the screen and was living among us.

But first I had to find him. GPS had guided me to a warehouse on a dead-end street in Glendale, a Los Angeles suburb. The place seemed deserted. As soon as I parked, however, a man warily appeared from behind a jacaranda tree. Yes, I had an appointment. No, I was not hiding any recording devices. He made a phone call, and I was escorted into the warehouse through an unmarked door behind a dumpster.

In the back near a black curtain a little wrinkled hand waved hello.

He was about three feet tall and ambled toward me with wide eyes, as if he had discovered a mysterious new life form. He looked me up and down and introduced himself.

audio-animatronics,” his word for mechanical figures with choreographed movements. There were endlessly harmonizing Small World dolls, marauding Caribbean pirates (“yo-ho!”), Abraham Lincoln delivering the Gettysburg Address. The technology was a runaway hit, mesmerizing generations of children and helping to turn Disneyland in California and Walt Disney World in Florida into cultural touchstones and colossal businesses.

Disney’s 14 theme parks around the world attracted 156 million visitors in 2019, and the Disney Parks, Experiences and Products division generated $26 billion in revenue. The coronavirus pandemic severely disrupted operations for a year, but the masses have returned. The wait to get on the swaying Seven Dwarfs Mine Train at Disney World on a recent day was two hours and 10 minutes — Delta variant, be darned.

How are the rudimentary animatronic birds in Disneyland’s Enchanted Tiki Room supposed to compete? They dazzled in 1963. Today, some people fall asleep.

“We think a lot about relevancy,” Josh D’Amaro, chairman of Disney Parks, Experiences and Products, said in April during a virtual event to promote the opening of an interactive Spider-Man ride and immersive “land” dedicated to Marvel’s Avengers. “We have an obligation to our fans, to our guests, to continue to evolve, to continue to create experiences that look new and different and pull them in. To make sure the experience is fresh and relevant.

“And all of that is risk,” Mr. D’Amaro acknowledged. “There is legacy here. People like the way things are. But we’re going to keep pushing, keep making it better.”

Wicked Witch of the West that flailed its arms and shifted its body with remarkable speed and precision.

More recently, Disney has introduced robot characters that seem to talk to guests (Mr. Potato Head, 2008). Others move with such elegance that some visitors mistake them for video projections (an “Avatar” shaman, 2017).

Disney attractions have always required the suspension of disbelief: Those are real flying galleons in Peter Pan’s Flight, not plastic ride vehicles on a rail. But advances in movie imagery — computer-generated animation, the blending of live-action footage with elaborate digital effects — have put pressure on Disney to make its robots more convincing.

“You know how Elsa moves,” said Kathryn Yancey, an Imagineering show mechanical engineer, referring to the “Frozen” princess. “Kids have watched the movie over and over, maybe even in the car that morning. So our animatronic Elsa also has to be fast and lyrical. She can’t be lumbering.”

WEB Slingers: A Spider-Man Adventure, features a “stuntronic” robot (outfitted in Spidey spandex) that performs elaborate aerial tricks, just like a stunt person. A catapult hurls the untethered machine 65 feet into the air, where it completes various feats (somersaults in one pass, an “epic flail” in another) while autonomously adjusting its trajectory to land in a hidden net.

“It’s thrilling because it can be hard to tell whether it’s a robot or a person — the stuntronic Spider-Man, it’s that good,” Wade Heath said as he joined the line to re-ride WEB Slingers in early August. Mr. Heath, 32, a recruiter for Pinkerton, the security company, described himself as “a major Disney nerd” who has, at times, been surprised that the company’s parks have not evolved faster.

three years to develop. Disney declined to discuss the cost of the stuntronics endeavor, but the company easily invested millions of dollars. Now that the technology has been perfected, Disney plans to roll it out at other parks. WEB Slingers, for instance, has been greenlighted for Disneyland Paris.

Bob Weis, who leads Disney’s 1,000-plus member Imagineering division. In the beginning, it was just an expensive research project with no clear outcome.

“It’s not easy to prove return on investment for never-considered-possible inventions,” Mr. Weis said. “Our longstanding history of creating experiences that completely wow guests — for them to suspend disbelief and live in that moment — has paved the way for acceptance of this inherent risk.”

But budgets are not endless. “We have to be discerning because, as you can imagine, we have plenty of amazing ideas, capabilities and stories,” Mr. Weis added.

Boston Dynamics, where he contributed to an early version of Atlas, a running and jumping machine that inspires “how did they do that” amazement — followed by dystopian dread.

Baby Yoda and swinging ones like Spider-Man — that are challenging to bring to life in a realistic way, especially outdoors.

About 6,000 animatronics are in use at Disney parks worldwide, and almost all are bolted to the floor inside ride buildings. It’s part of the magic trick: By controlling the lighting and sight angles, Disney can make its animatronics seem more alive. For a long time, however, Disney has been enamored with robotics as an opportunity to make the walkways between rides more thrilling.

“We want to create incredible experiences outside of a show box,” said Leslie Evans, a senior Imagineering executive, referring to ride buildings. “To me, that’s going to be next level. These aren’t just parks. They are inhabited places.”

Millennium Falcon: Smugglers Run, unveiled in 2019, asks groups of riders to work together to steer the ship. The ride’s queuing area features an impressive Hondo Ohnaka animatronic. (He’s a miscreant from the “Clone Wars” animated series.)

In 2003, Disney tested a free-roving animatronic dinosaur named Lucky; he pulled a flower cart, which concealed a puppeteer. In 2007, the company experimented with wireless animatronic Muppets that rode around in a remote-controlled vehicle and chatted with guests. (A technician operated the rig from afar.) Lucky and the Muppet Mobile Lab have since been retired.

play test” stage — a short, low-profile dry run at a theme park to gather guest feedback. Disney declined to say when or where.

Richard-Alexandre Peloquin was also towering in the air, except his lower body was ensconced in a contraption/costume that gave him legs the size of oil barrels and feet that resembled those of a Wampa, a furry “Star Wars” ice beast.

Asya Cara Peña, a ride development engineer, piped up with a rudimentary explanation. They were developing a full-body exoskeleton that could be applied to a wide variety of oversize characters — and that counteracted the force of gravity. Because of safety concerns, not to mention endurance, the weight of such hulking costumes (more than 40 pounds) could not rest entirely or even mostly on a puppeteer’s shoulders. Instead, it needed to be redirected to the ground.

“But it also needs to look natural and believable,” Ms. Peña said. “And it has to be something that different performers of different body types with different gaits can slip into with identical results.”

Just then, Mr. Becker began to sway unsteadily. “Whoa! Be careful!” Ms. Peña shouted, rushing to help him sit down on an elevated chair.

“We still have a long way to go,” Mr. Becker said a bit sheepishly. “The challenge is to not just have a big idea, but to get it all the way to the park.” 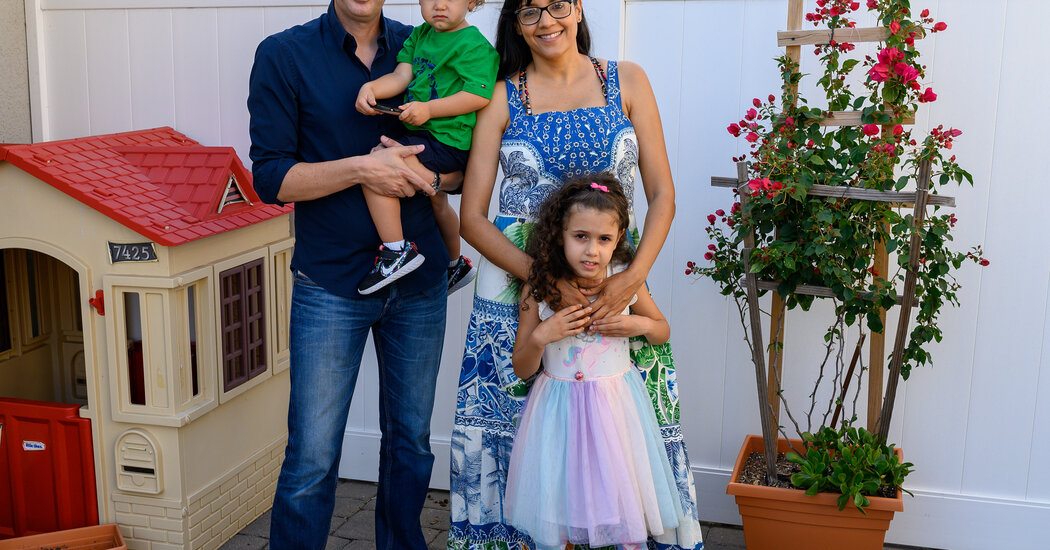 “Unvaccinated children would still need to quarantine for five days, and the parents, of course, must stay with the child,” said Eric Newman, who owns the travel blog Iceland With Kids. “Iceland’s brand-new travel regulations are not friendly to families hoping to visit with children.”

After a year of virtual schooling and working from home, parents have no desire to quarantine with their kids, said Anthony Berklich, the founder of the travel platform Inspired Citizen. “What these destinations are basically saying is you can come but your children can’t,” he said.

Instead, families are opting for warm-weather destinations closer to home.

When the Centers for Disease Control and Prevention announced in January that proof of a negative PCR test would be required of all air passengers arriving in the United States, many tropical resorts — including more than a dozen Hyatt properties — began offering not just free on-site testing, but a deeply discounted room in which to quarantine in case that test comes back positive. That move, said Rebecca Alesia, a travel consultant with SmartFlyer, has been a boon for family travel business.

“What happens if the morning you’re supposed to come home, you get up and Junior has a surprise positive test?” she said. “A lot of my clients have booked this summer because of this policy.”

For parents struggling to decide how and when to return to travel, there is good news on the horizon, said Dr. Shruti Gohil, the medical director of infection prevention at the University of California, Irvine.

“The chances of a good pediatric vaccine coming soon are high,” she said, noting that both Pfizer and Moderna are already running pediatric trials on their vaccines. “There is no reason to think that the vaccine will have any untoward effects on children that we haven’t already noted in adults.”

In the meantime, she said, parents with children need to continue to be cautious. That doesn’t mean families shouldn’t travel at all, but she recommends choosing to drive rather than fly; to not allow unvaccinated children to play unmasked with children from other households; and to remain vigilant about wearing masks and regularly washing hands while on the road.

China's housing market slump has intensified in recent weeks as sales plunge and more developers default on their debt. Now the downturn has reached … END_OF_DOCUMENT_TOKEN_TO_BE_REPLACED