When Facebook this week released its first quarterly report about the most viewed posts in the United States, Guy Rosen, its vice president of integrity, said the social network had undertaken “a long journey” to be “by far the most transparent platform on the internet.” The list showed that the posts with the most reach tended to be innocuous content like recipes and cute animals.

Facebook had prepared a similar report for the first three months of the year, but executives never shared it with the public because of concerns that it would look bad for the company, according to internal emails sent by executives and shared with The New York Times.

In that report, a copy of which was provided to The Times, the most-viewed link was a news article with a headline suggesting that the coronavirus vaccine was at fault for the death of a Florida doctor. The report also showed that a Facebook page for The Epoch Times, an anti-China newspaper that spreads right-wing conspiracy theories, was the 19th-most-popular page on the platform for the first three months of 2021.

The report was nearing public release when some executives, including Alex Schultz, Facebook’s vice president of analytics and chief marketing officer, debated whether it would cause a public relations problem, according to the internal emails. The company decided to shelve it.

called on the company to share more information about false and misleading information on the site, and to do a better job of stopping its spread. Last month, President Biden accused the company of “killing people” by allowing false information to circulate widely, a statement the White House later softened. Other federal agencies have accused Facebook of withholding key data.

Facebook has pushed back, publicly accusing the White House of scapegoating the company for the administration’s failure to reach its vaccination goals. Executives at Facebook, including Mark Zuckerberg, its chief executive, have said the platform has been aggressively removing Covid-19 misinformation since the start of the pandemic. The company said it had removed over 18 million pieces of misinformation in that period.

But Brian Boland, a former vice president of product marketing at Facebook, said there was plenty of reason to be skeptical about data collected and released by a company that has had a history of protecting its own interests.

Trending World, according to the report, was viewed by 81.4 million accounts, slightly fewer than the 18th-most-popular page, Fox News, which had 81.7 million content viewers for the first three months of 2021.

Facebook’s transparency report released on Wednesday also showed that an Epoch Times subscription link was among the most viewed in the United States. With some 44.2 million accounts seeing the link in April, May and June, it was about half as popular as Trending World in the shelved report. 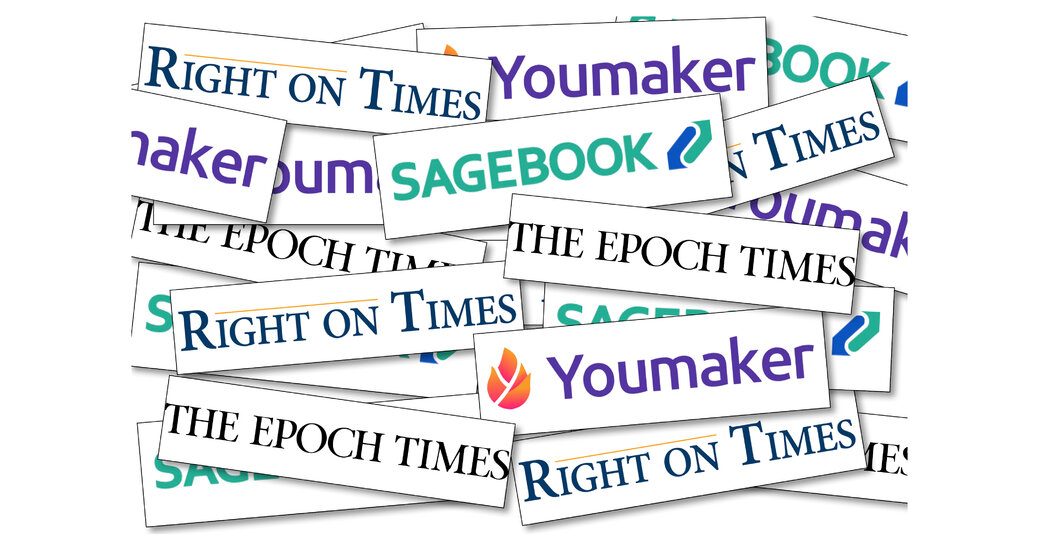 Right on Times does not disclose any partnership with Epoch, nor do the two websites share a unique digital identifier. But when it launched in October, its articles were posted on social media by Epoch employees. Right on Times also had a prominent ad campaign on Epoch properties, and it included many articles from Epoch properties on its service. Those actions led disinformation researchers, including those at the Global Disinformation Index, to conclude there was coordination.

Epoch Times said that Right on Times was one of its advertisers, and that Youmaker was an “independent business partner.” Sagebook, the company said, was being phased out. (The Sagebook site was no longer accessible as of last week.)

“The premise of your article is incorrect,” the company said in an email. “The Epoch Times does not deal in conspiracy theories. We pride ourselves on rigorous, fact-based reporting, which has attracted a large and rapidly growing audience.”

The largest media brand run by the Epoch Media Group remains The Epoch Times, which regularly publishes pro-Trump misinformation. In the past year, articles from The Epoch Times garnered 123.7 million likes and shares on social media, according to the social media analysis tool Buzzsumo. It has tens of millions of social media followers and has become a true rival of successful conservative outlets like The Daily Caller and Breitbart News. It now has dozens of international versions.

In 2019 and 2020, Facebook alleged links between The Epoch Times and brands including “The BL” and “Truth Media,” saying they were all part of the Falun Gong orbit. The brands operated hundreds of accounts that automatically published posts on Facebook at a rapid clip about conservative ideology and the 2020 election, as well as misinformation about the coronavirus. Eventually, Facebook ruled that many of those accounts violated its “coordinated inauthentic behavior” policies. The company removed them in two separate takedowns.

“We have clarified repeatedly that The Epoch Times has no relationship with The BL and Truth Media,” Epoch Media said.

Epoch began to make use of the alternative social media platforms, like Sagebook and Youmaker, in late 2020. Youmaker draws about 1.5 million unique visitors per month, according to data from the website analytics company SimilarWeb. Sagebook attracted 38,000 monthly visitors and Right on Times sees 15,000, according to SimilarWeb data.

SAN FRANCISCO — Cleve Jones has lived in the Castro neighborhood for nearly 50 years, almost from the day he graduated from high school in Phoenix and … END_OF_DOCUMENT_TOKEN_TO_BE_REPLACED

A home inspection can spare you from unpleasant surprises after you buy. After crunching the numbers, searching your favorite neighborhoods, and … END_OF_DOCUMENT_TOKEN_TO_BE_REPLACED