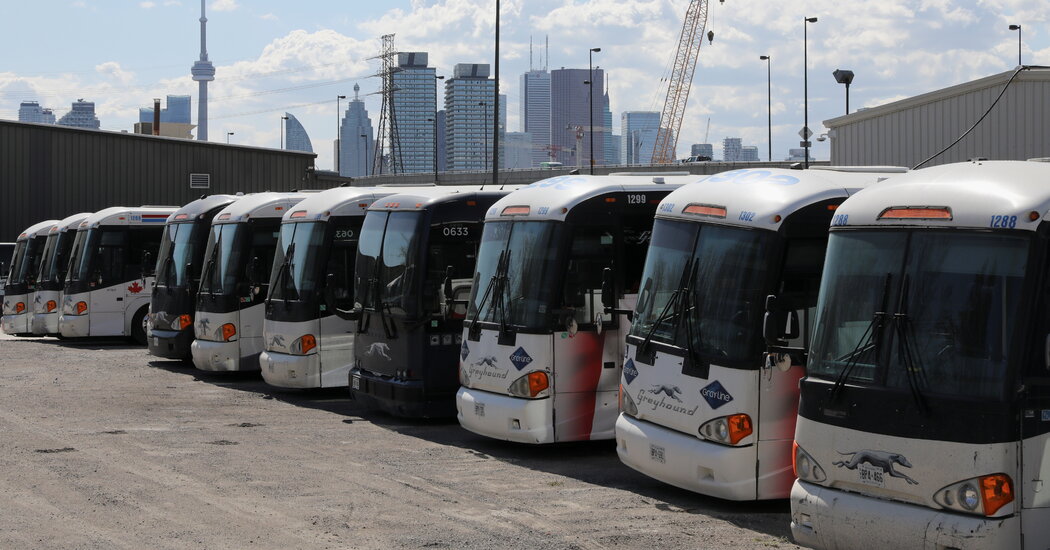 Given that Greyhound had already suspended operations for about a year because of the pandemic, its announcement on Thursday that it was permanently ending all of its remaining bus service in Canada was almost symbolic.

money being spent in Toronto on the subway. And yet when it comes to rural people, well, they’re just chopped liver. There is no subsidy for transportation.”

In parts of the country where Greyhound operated, its service was usually the most affordable form of travel. And for many rural communities it was frequently the only alternative to owning a car or finding a ride in one.

A 2012 inquiry into dozens of women who went missing on the Highway of Tears in British Columbia found that a lack of reliable public transportation led many of them into danger through hitchhiking. (A subsidized service was restored several years later.)

Professor Prentice added that buses didn’t just provide low-cost travel for people, their quick and economical parcel delivery service offered same-day shipping between many places and gave rural communities not served by courier companies a quick and reliable method to receive time-sensitive shipments such as parts for farm equipment.

The medical system was also a major user of bus parcel express. When shipping packages to family members at Christmas, I often managed to always show up at Ottawa’s bus terminal just after someone had dropped off a cooler covered in stickers indicating that it contained human eyeballs destined for corneal transplants.

government-owned Saskatchewan Transportation Corporation, saying that it could no longer afford its subsidies.

The provinces are now the only authority over bus lines, and some of them have completely deregulated their industries.

The result is an increasingly fragmented system in which Greyhound and others have been replaced by newcomers using smaller buses and nonunion drivers to find profits, although not always successfully. In some cases the newcomers have improved service, but many routes have gone unfilled.

Above all, it’s no longer possible to book a single ticket and enjoy, or perhaps endure, a bus ride across most of the country.

Coast to Coast Bus Coalition. The group is calling on the federal government to return to regulating buses and to work with bus lines to create a national system that would integrate with Via Rail.

Professor Prentice said that the end of Greyhound in Canada had elevated the importance of at least hearing out such a plan.

“It’s remarkable how little people care, or seem to care, about buses,” he said. “Rural areas need transport, but that doesn’t seem to be ever something that translates into votes and therefore doesn’t get a lot of attention.”

symbol of the sovereignty of Canada.” But beavers don’t immediately conjure up warm feelings among all Canadians.

Property owners struggle to keep their land from being flooded by the industrious creatures, and their dams sometimes lead to dangerous highway washouts. This week, the Royal Canadian Mounted Police in Saskatchewan found a pile of fence posts that had been reported as stolen incorporated into a beaver dam.

please email me directly and include your contact information and where you live. Please don’t labor over the note, I’ll be interviewing everyone who has a story that will fit with the article.

caught up with some of its artists. For one aerialist, Dan found that “the long pause had undermined his confidence, since he couldn’t rehearse his airborne routines. When he recently started retraining, he said, he discovered that he had lost his ‘muscle memory’ and felt afraid to be in the air.” Also be sure to check out this video presentation of the artists getting back to the unique line of work.

KOROPY, Ukraine — Four men tugged at long strips of fabric to lift a coffin out of the gaping hole in the backyard of a small house. They flung the … END_OF_DOCUMENT_TOKEN_TO_BE_REPLACED

The lawsuits argue that state constitutions offer more protection for abortion than the federal constitution, either by quirk of state tradition or … END_OF_DOCUMENT_TOKEN_TO_BE_REPLACED