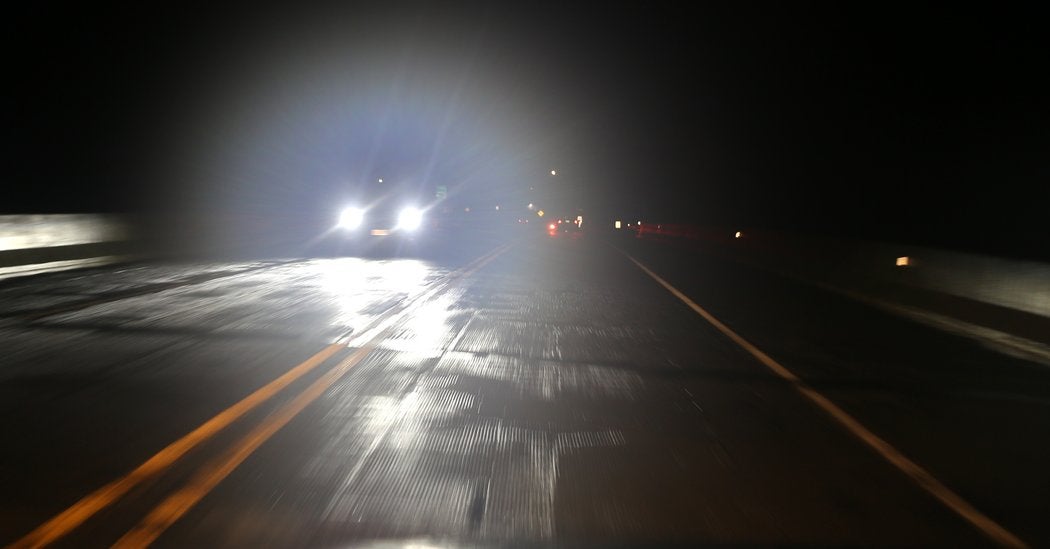 You’re driving on a winding, rural road at night and a car in the opposite lane has its high beams on.

A. Flash your headlights to alert the driver?

B. Momentarily look down and to the right at the white line on the road to avoid being blinded?

C. Turn on your high beams?

(For purposes of this quiz, we’ll rule out swearing as an option.)

Why shouldn’t I flash them?

Drivers once commonly flashed their headlights at oncoming cars that had their high beams on. But according to William E. Van Tassel, the manager of driver training programs at AAA’s headquarters in Heathrow, Fla., “We really have gotten away from that.”

The driver with the blinding high beams might be impaired by alcohol. Flashing your own high beams, particularly at night, could make that person’s vision, possibly already diminished by drinking and darkness, even worse, Mr. Van Tassel said.

the so-called moth effect, which occurs when drivers are mesmerized by bright or flashing lights and head in the direction they are looking. Flashing your lights could also be interpreted as an act of aggression.

Universal agreement is hard to come by

Laws about using headlights to communicate — if they exist at all — can vary from state to state, said Brett Robinson, the executive director of the American Driver and Traffic Safety Education Association in Indiana, Pa.

As for how some of these practices became part of driving folklore, it’s a case of “your father did it, and his father did it,” he said.

Mr. Robinson recommended against using headlights to communicate, emphasizing that no universally accepted, consistent standards exist. “It means something different to everybody,” he said.

To add to the confusion, “lots of different regional norms” exist, said Staff Sgt. Terence J. McDonnell of the Traffic Services Section of the New York State Police. A commonly accepted signal in one part of the country might mean something entirely different somewhere else.

Driving School Association of the Americas in North Wales, Pa., near Philadelphia, said that if the other person is slow to respond to the signal, the one yielding might then decide to go.

“If that person doesn’t react fast enough, they could change their mind,” Mr. Gillmer said. “To play it 1,000 percent safe,” he recommended against using headlights to signal other drivers. “By you doing no action, it’s better that you don’t have somebody misinterpret what you are saying,” he said.

In other cases, drivers might use their lights to indicate that it’s safe to pull into traffic or make a turn.

“Flashing your head beams to say ‘It’s O.K. to come out’” when the other driver cannot see oncoming traffic is fairly common, Sergeant McDonnell said. But he cautioned drivers to do so at their own peril, “because you are putting your safety in the hands of that other driver’s courtesy.”

What are other headlight no-nos?

Experts advised against using headlights to warn drivers about a speed trap.

Mr. Van Tassel said that AAA does not encourage that kind of behavior and that motorists should drive within the speed limit. He noted that the effects of a crash at 65 miles per hour are much worse than one at 55 m.p.h.

Some suggested that using headlights in this way could be interpreted by the authorities as obstructing governmental administration, though Sergeant McDonnell said he didn’t know if he would go that far.

you flash your lights at a car without its lights on, you are targeted for violence. The other version suggests that drivers flash their headlights to get you to pull over and that when you do, you are killed as part of a gang’s initiation.

Snopes.com, the myth-debunking website, has repeatedly found those stories to be false.

Arseny Bulakov, the chairman of the St. Petersburg Tolkien Society, called the production “a very revealing artifact” of its era: “filmed in destitute … END_OF_DOCUMENT_TOKEN_TO_BE_REPLACED