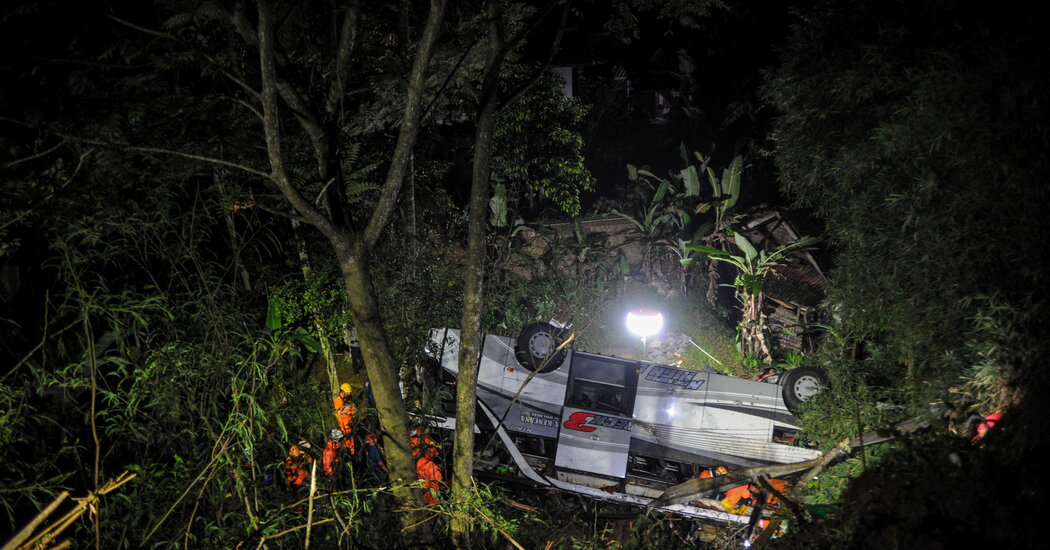 JAKARTA, Indonesia — The students from an Islamic middle school were on their way home from a trip to a pilgrimage site in an Indonesian province on the island of Java.

The rain was pouring on Wednesday evening. The surrounding area had no street lamps. As their bus was making a turn on a narrow, downhill stretch of the Wado-Malangbong Highway in Sumedang, West Java Province, it appears that the brakes failed, the police said.

The vehicle, carrying a total of 66 people — including the students from a school in Subang, their teachers and family members — plunged into the ravine, killing 27, including the bus driver. Thirteen others were injured.

The police were still investigating the cause of the accident, said a police spokesman, Dedi Juhana, but a lack of skid marks on the road suggested that the brakes had malfunctioned.

He said that the bus had dropped some 65 feet in a valley surrounded by farmland in Sumedang. The site of the accident was a government-owned road frequently used by commuters traveling between provinces.

Rescue teams worked overnight to evacuate the victims. On Thursday morning, they recovered the body of a boy who had been trapped beneath the overturned bus. He died during the rescue attempt. Some survivors were sent to a nearby clinic and a hospital for treatment.

Television footage showed relatives lining the halls of a hospital and a morgue in Sumedang.

Budi Setiyadi, the director general of land transportation for Indonesia’s transport ministry, said in a statement on Wednesday, “We express deep concern and condolences for this incident.”

Mr. Budi said that officials were considering adding guard rails to the road or paving it as they continued to investigate the accident.

Steep valleys and ravines are common along Indonesian highways because it has so much mountainous terrain. A lack of adequate street lighting and poor infrastructure lead to regular traffic accidents.

On average, three people in Indonesia died every hour from road accidents in the first quarter of 2020, according to the transport ministry.

The authorities said the student group had traveled some six hours from their homes to pay their respects at the tomb of Syekh Abdul Muhyi, a missionary who brought Islam to the Tasikmalaya region after the mid-17th century, when Hinduism was still the primary religion in the surrounding territory.

The students, teachers and parents were visiting the site on the eve of a national holiday marking the ascension of the Prophet Muhammad.

Some Muslim families visit the graves of relatives on Islamic holidays, using the occasion for outdoor picnics. While some Islamic leaders oppose the practice of pilgrimage at the burial sites of missionaries, others allow it.

Anil G. Kumar, a civil engineer, was one of them. Around this time last year, he and his family were about to buy a two-bedroom apartment. But when … END_OF_DOCUMENT_TOKEN_TO_BE_REPLACED

In a coup for the venerable Paris Opera, founded in 1669 by Louis XIV, the company announced on Friday that the superstar conductor Gustavo Dudamel … END_OF_DOCUMENT_TOKEN_TO_BE_REPLACED

HONG KONG — Jimmy Lai, a pro-democracy media figure, and several of Hong Kong’s most prominent opposition campaigners were sentenced on Friday to … END_OF_DOCUMENT_TOKEN_TO_BE_REPLACED