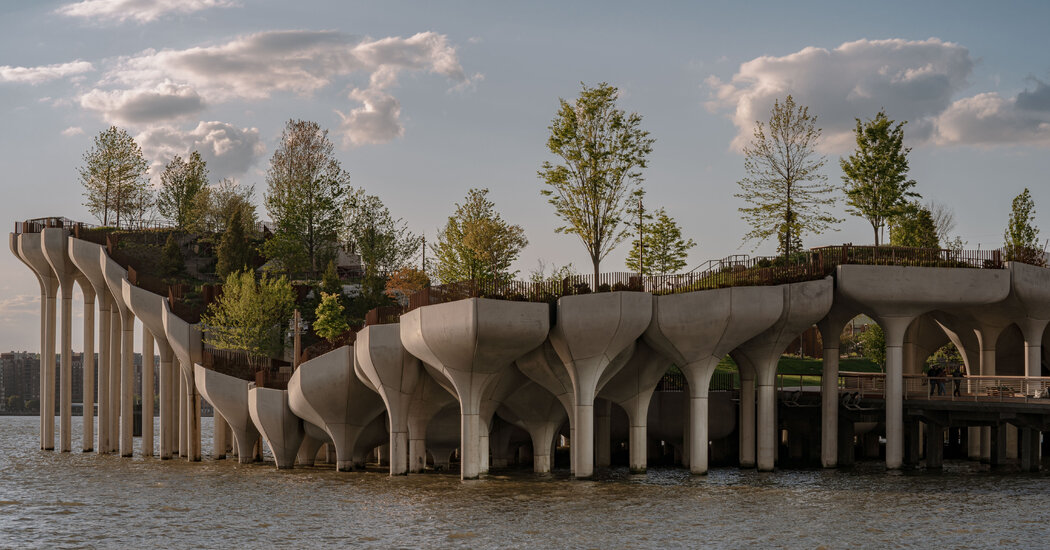 Little Island, developed by Barry Diller, with an amphitheater and dramatic views, opens on Hudson River Park. Opponents battled it for years.

I won’t dawdle over the mess that followed the island’s announcement. A real estate titan who had bones to pick with the Hudson River Park Trust supported a series of legal challenges. At one point, seeing no end in sight to the court fights, Diller backed out. A deal brokered by New York’s governor, Andrew M. Cuomo, ultimately rescued the project and also delivered public commitments to enhance protections for wildlife habitats and improve other parts of the four-mile-long, 550-acre Hudson River Park.

English garden follies — not least because Little Island can remind you more of a private estate than a city park. It’s clearly going to cost a king’s ransom to maintain, a burden the Hudson River Park Trust (which is to say the public) would have to bear absent other arrangements.

Fortunately, Diller has promised that his family foundation will pick up the tab for the next 20 years. That’s not forever, but it includes programming costs, Diller told me — until the programming (mostly free, not a moneymaker) can find nonprofit funding to “stand on its own.” He estimates he may end up spending $380 million all in — no doubt the largest private gift to a public park in the city’s history, maybe in the planet’s.

The other day I climbed to the topmost point on the island, a grassy crow’s nest with a 360 panorama. A lovely path shaded by dogwoods and redbuds, perfumed by woodland azaleas, snaked up the hillside. The views shifted from city to river, garden to grassland.

Heatherwick’s columns peek through a hill here or there, but you don’t really focus on them once you’re on the island, save for the great arch of giant tulip bulbs at the entrance, which required a year of tweaking to get the curves just right and to accommodate soil for Nielsen’s trees on top.

concerts, dance and children’s programs are planned to get underway this summer. Trish Santini, Little Island’s executive director, told me that her staff has been working closely with community organizations to ensure free and inexpensive tickets get into the hands of underserved groups and neighborhood schoolchildren. A second stage, called the Glade, at the base of a sloping lawn, tucked into the southeast corner of the park and framed by crape myrtle and birch trees, is custom made for kids and educational events. The main plaza, where you can grab a bite to eat and sit at cafe tables under canvas umbrellas, doubles as a third venue.

It’s on the route between the two gangways that link the island to Manhattan — and a stone’s throw from the High Line — so it’s sure to be mobbed. Santini also said the island will do timed reservations to prevent overcrowding. Little Island will need it, I expect. Two-plus acres is half the size of a city block.

sculpture by David Hammons, donated by the Whitney Museum of American Art to Hudson River Park, which traces in steel the outlines of bygone Pier 52.

North of Little Island, Pier 57 — where Google is leasing new quarters — will soon open community spaces, a food court and its roof deck to the public (City Winery is already up and running there). Piers 76 and 97 are also getting makeovers.

agreed with opponents who challenged reports by authorities over whether the project would inhibit the mating habits of juvenile striped bass.

This time environmental agencies determined that Little Island would cause no harm to fish, and the strategy didn’t work.

requirements for wheelchair accessibility are a design opportunity not a burden. I climbed back up the hill to the crow’s nest, and there she still was.

Huddled against a sunny morning gale, the mother duck was tending her eggs.

The ducklings, I learned, just hatched this week. They’ve started paddling in the river.

GREENVILLE, N.C.--(BUSINESS WIRE)--Employers aiming to win the war on talent have a new “A” team to tap into: college and professional athletes. … END_OF_DOCUMENT_TOKEN_TO_BE_REPLACED

Mortgage rates are likely to rise in July, extending a seven-month streak. High inflation, and the Federal Reserve's efforts to control it, have … END_OF_DOCUMENT_TOKEN_TO_BE_REPLACED