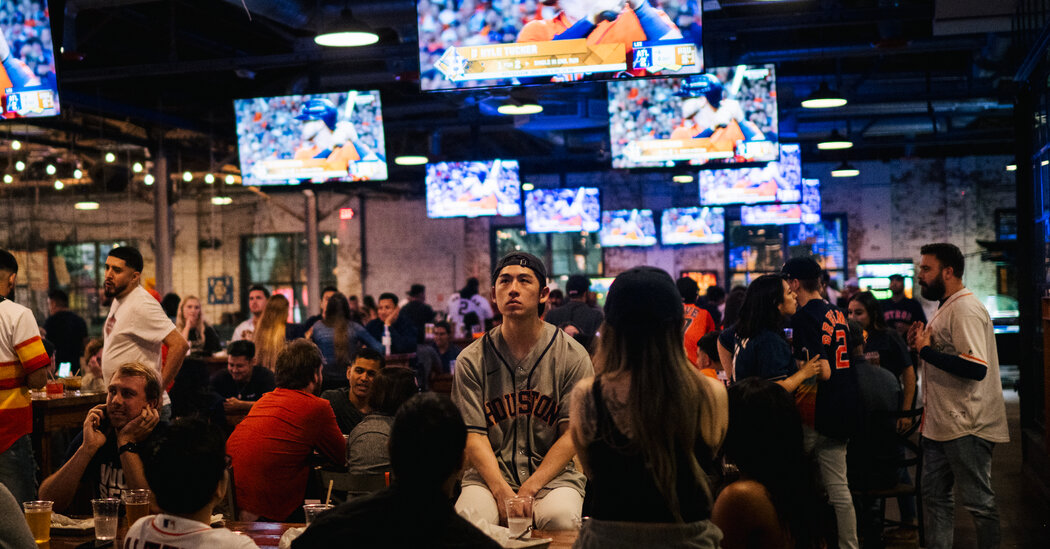 LOS ANGELES — More than a decade after Apple disrupted the music industry and Amazon upended retail, the tech heavyweights have set their sights on a new arena ripe for change: live sports.

Emboldened by their deep pockets and eager to boost viewership of their streaming-subscription services, Apple and Amazon have thrust themselves into negotiations for media rights held by the National Football League, Major League Baseball, Formula One racing and college conferences.

They are competing to replace DirecTV for the rights to N.F.L. Sunday Ticket, a package the league wants to sell for more than $2.5 billion annually, about $1 billion more than it currently costs, according to five people familiar with the process. Eager not to miss out, Google has also offered a bid from YouTube for the rights beginning in 2023, two people familiar with the offer said.

reported by the SportsBusiness Journal.

Fans will still be able to access all the games on Sunday, regardless of who wins the rights, but they will probably pay a premium to add the service to their Apple, Amazon, ESPN+ or YouTube service, some of the dozen people said. It is not yet clear if that premium would be more or less than the $294 that DirecTV charges for a year, they added.

The Race to Rule Streaming TV

Apple and Amazon are trying to position themselves for a future without cable. Since 2015, traditional pay television has lost a quarter of its subscribers — about 25 million homes — as people traded cable packages for apps like Netflix and Hulu, according to MoffettNathanson, an investment firm that tracks the industry.

But the price of live sports rights is only projected to increase. The biggest media companies, including Disney, Comcast, Paramount and Fox, are expected to spend a combined $24.2 billion for rights in 2024, according to data from MoffettNathanson, nearly double what they spent a decade earlier.

The fragmenting of a decades-old distribution model has created an opportunity for Apple and Amazon. The companies want to expand deeper into media by selling subscriptions to Apple TV+ and Amazon Prime. Besides containing their own exclusive shows and sports, those services double as portals selling additional streaming offerings like Starz and HBO Max, which pay Apple and Amazon 15 percent or more of each subscription sold.

Amazon generates more than $3 billion annually from third-party subscription sales, according to estimates by the investment bank BMO Capital Markets. To make the business model work, Apple and Amazon must attract more viewers, and sports are the most powerful draw in media. The companies may be willing to lose money on Sunday Ticket to expose new customers to other parts of their business, the same calculation that DirecTV historically made.

For all their disruptive potential, though, Apple and Amazon have yet to win a marquee rights package in the United States. That is reminiscent of 20 years ago, when sports leagues feared they would lose viewers by shifting games from network television to cable. But the change gradually became standard.

Traditional television companies are trying to stave off Apple and Amazon by starting their own streaming-subscription services. Last year Comcast, which owns NBCUniversal, shuttered NBC Sports Network to bolster its USA channel and to encourage people to pay for Peacock, where it exclusively aired some English Premier League soccer games. Similarly, ESPN struck a deal with the National Hockey League to televise some games on its ESPN+ service, and CBS has shown marquee soccer games on Paramount+.

But those services have a fraction of the more than 100 million cable subscribers the media companies once reached. As a result, the bulk of sports programming goes on traditional pay-TV channels where they can guarantee leagues and advertisers larger audiences.

The National Basketball Association will be the first major test of the new competitive landscape. Its agreements with ESPN and Turner run through the 2024-25 season. Most sports and media executives predict that the league will stick with traditional broadcasters for most of its games, while carving out some small portion of rights for a tech company.

“It hedges them for the future and exposes the product to new audiences,” said George Pyne, founder of the sports private equity firm, Bruin Capital, and the former chief operating officer of NASCAR. “They can still have a long-term relationship with network partners but dip their toe in with new media.”

Until then, the best opportunities for Apple and Amazon may be overseas — where Amazon has been active for years — because European soccer leagues resell their rights every two to three years. Amazon recently scooped up rights to Europe’s top tournament, the UEFA Champions League, in Britain, Germany and Italy. It also has rights to France’s Ligue 1, which it offers to Prime Video subscribers for annual fee of about $90, and the English Premier League.

Media companies will be pressured to expand geographically to compete, said Daniel Cohen, who leads global media rights consulting for Octagon, a sports agency. Television broadcasters could also team up to pool their financial firepower, or buy each other outright, to compete with tech giants willing to pay billions for rights like N.F.L. Sunday Ticket.

“It comes down to a Silicon Valley ego thing,” Mr. Cohen said of the high-dollar N.F.L. deal. “I don’t see a road to profitability. I see a road to victory.” 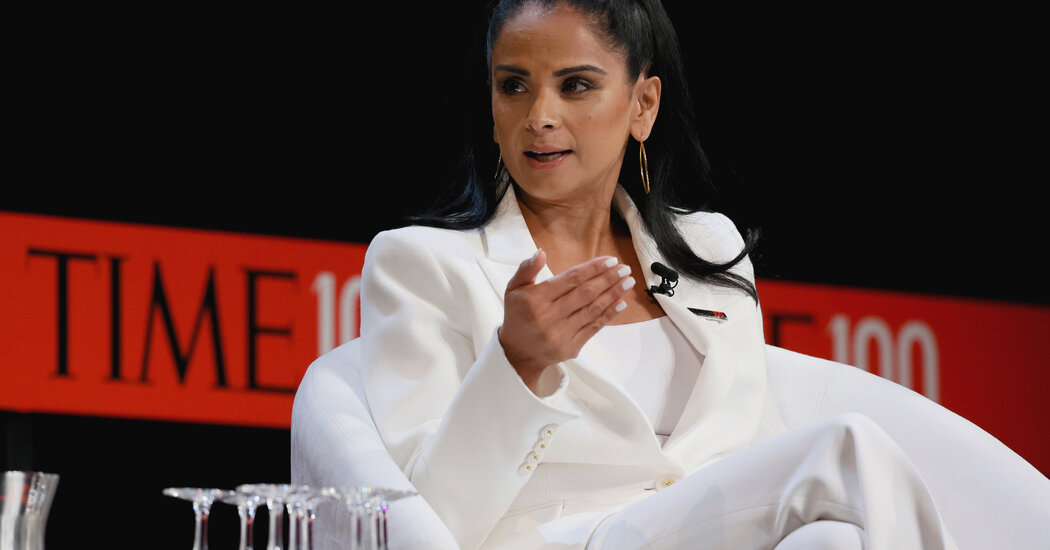 While being honored at the Banff Film Festival in Canada in early June, Bela Bajaria, Netflix’s head of global television, surprised some with what she didn’t say. Despite the recent turmoil at the streaming giant — including a loss of subscribers, hundreds of job cuts and a precipitous stock drop — she said Netflix was charging ahead, with no significant plans to change its programming efforts.

“For me, looking at it, the business works,” Ms. Bajaria said from the stage. “We are not doing some radical shift in our business. We’re not merging. We’re not having a big transitional phase.”

Two weeks later, after Netflix had laid off another 300 people, Reed Hastings, the company’s co-chief executive, doubled down on Ms. Bajaria’s message, reassuring the remaining employees that the future would, in fact, be bright and that in the next 18 months the company would hire 1,500 people.

“Spiderhead” and the series “God’s Favorite Idiot” have been critically derided.) A producer who works with Netflix said the word “quality” was being bandied about much more often in development meetings.

Emily Feingold, a Netflix spokeswoman, disputed the idea that focusing on a show’s quality was somehow a change in strategy, referring to such disparate content as “Squid Game,” the reality television show “Too Hot to Handle,” and movies like “Red Notice” and “The Adam Project.”

“Consumers have very different, diverse tastes,” Ms. Feingold said. “It’s why we invest in such a broad range of stories, always aspiring to make the best version of that title irrespective of the genre. Variety and quality are key to our ongoing success.”

The producer Todd Black said that the process for getting a project into development at Netflix had slowed down but that otherwise it was business as usual.

“They are looking at everything, which I get,” said Mr. Black, who last worked with Netflix when he produced “Ma Rainey’s Black Bottom” in 2020. “They are trying to course correct. We have to be patient and let them do that. But they are open for business. They are buying things.”

Indeed, the company still intends to spend some $17 billion on content this year. It paid $50 million last month for a thriller starring Emily Blunt and directed by David Yates (“Harry Potter and the Deathly Hallows”). And it plans to make “The Electric State,” a $200 million film directed by Joe and Anthony Russo (“Avengers: Endgame” and “The Gray Man”) and starring Millie Bobby Brown and Chris Pratt, after Universal Pictures balked at the price tag. The company also just announced a development deal for a television adaptation of “East of Eden” starring Florence Pugh.

On Tuesday, Whip Media, a research firm, said Netflix had fallen from second to fourth place in the firm’s annual streaming customer satisfaction survey, behind HBO Max, Disney+ and Hulu.

The most significant change coming for Netflix is its advertising tier, which, as it has told employees, it wants to roll out by the end of the year. Netflix’s foray into advertising stoked excitement among media buyers at the industry’s annual conference in Cannes last week.

“It was pretty intense,” said Dave Morgan, who is the chief executive of Simulmedia, a company that works with advertisers, and who attended the conference. “It was one of the top two or three issues everyone was talking about.”

Mr. Hastings said Netflix would work with an outside company to help get its nascent advertising business underway. The Wall Street Journal reported that Google and Comcast were the front-runners to be that partner. Still, advertising executives believe that building out the business at Netflix could take time, and that the company might be able to introduce the new tier only in a handful of international markets by the end of the year.

It could take even longer for advertising to become a significant revenue stream for the company.

“You have a lot of media companies duking it out, and it’ll take quite a while to compete with those companies,” Mr. Morgan said. “I could imagine it will take three or four years to even be a top 10 video ad company.”

In an analyst report this month, Wells Fargo threw cold water on the notion that subscriber growth for an ad-supported tier would be quick. Wells Fargo analysts cautioned that the ad model would offer “modest” financial gains in the next two years because of a natural cannibalization from the higher-paying subscriber base. They predicted that by the end of 2025 nearly a third of the subscriber base would pay for the cheaper ad-supported model, roughly 100 million users.

Bank of America went further last week. “Ad-tiering could serve as a way for consumers across all income brackets to extend their streaming budget by trading down to subscribe to an additional service, benefiting Netflix’s competitors much more than Netflix itself,” it said in an analyst letter.

Netflix has also reached out to the studios that it buys TV shows and movies from in recent weeks, seeking permission to show advertising on licensed content. In negotiations with Paramount Global, Netflix has mentioned paying money on top of its existing licensing fee rather than cutting the company in on revenue from future ad sales, said a person familiar with the matter who spoke on the condition of anonymity to discuss active talks.

This mirrors the approach Netflix took with studios when it introduced its “download for you” feature, which allowed users to save movies and TV shows to their devices to watch offline. When Netflix added that feature, executives at the streaming service agreed to pay studios a fee in addition to their licensing agreement.

In the end, though, Netflix’s success will most likely come down to how well it spends its $17 billion content budget.

“Netflix, dollar for dollar, needs to do better, and that falls on Ted Sarandos and his whole team,” Mr. Greenfield said, referring to the company’s co-chief executive. “They haven’t done a good enough job. Yet, they are still, by far, the leader.”

ROSWELL, Ga.--(BUSINESS WIRE)--Berkshire Hathaway HomeServices Georgia Properties, one of the largest and most successful real estate organizations in … END_OF_DOCUMENT_TOKEN_TO_BE_REPLACED

The real estate market seems to have a split personality.On the positive side for homebuyers, the number of properties for sale shot up by a … END_OF_DOCUMENT_TOKEN_TO_BE_REPLACED

Kim Tae-Ri plays a gun-toting time traveler in 'Alienoid.' Well Go USA Director Choi Dong-hoon likes a challenge. That much is apparent in his latest … END_OF_DOCUMENT_TOKEN_TO_BE_REPLACED