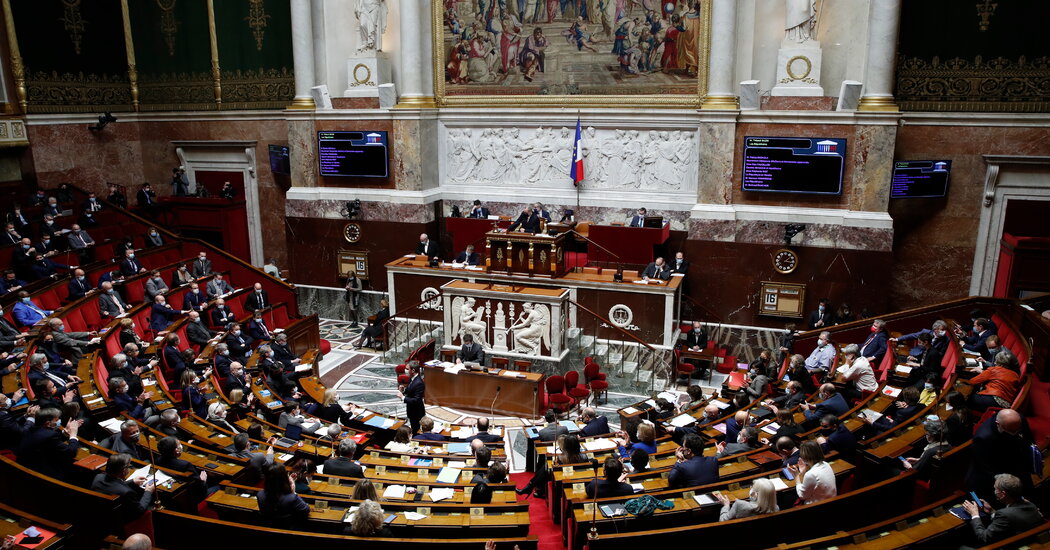 PARIS — The French National Assembly adopted legislation late Monday that characterizes sex between adults and minors under 15 as rape, a move made after years of debate and rounds of sexual abuse scandals gradually pushed lawmakers to bring the French criminal code closer to that of most other Western countries.

“Children are off-limits,” France’s justice minister, Eric Dupont-Moretti, told the National Assembly, the lower house of Parliament, ahead of the vote on Monday. Under the bill, a sexual relationship with a minor under 15 would be punishable by 20 years in prison, unless the age gap between the consensual partners were small.

The bill, which also includes a provision that would make incest a specific crime, will go to the Senate this month and is expected to get final approval in April. The incest ban would also apply to sexual relationships between children under 18 and their step parents.

That lawmakers agreed on setting an age of consent only three years after having voted against a similar law largely reflects the impact of a series of recent sexual abuse scandals.

fall from grace of a writer who for decades openly engaged in and promoted pedophilia with the support of powerful friends and amid accusations of incest against a prominent French intellectual that surfaced in January.

Fresh allegations of sexual abuse against powerful figures in politics, the arts and the media that fueled new #MeToo movements have also increased pressure on the French government to take action.

“There has been a real shift in the public opinion and an awareness that there is a problem with these sexual violence cases,” said Pierre Verdrager, a sociologist who has studied pedophilia, adding that France had become highly aware of these issues.

Feminists have also contributed to this change in attitude, Mr. Verdrager said, and raised public awareness by speaking out against sexual abuse in the arts and papering Paris with posters denouncing domestic and sexual violence.

French law already prohibited sex between an adult and a minor under the age of 15, but it was not automatically considered rape. Further circumstances, such as the use of coercion, threats, or violence, were necessary to characterize such sexual relationships as rape.

toughened laws against sex crimes and extended the statute of limitations for rape against a minor to 30 years from 20 years, but lawmakers had stopped short of setting an age of sexual consent, citing legal complications.

Some lawmakers, following warnings from France’s Constitutional Council, were worried that setting an age of consent would automatically criminalize sexual relationships between a minor under the age of consent and a person only a few years older. The council reviews legislation to ensure it complies with the French Constitution.

In response, the new bill includes a “Romeo and Juliet” clause that would allow for sexual relationships between a children under 15 and an adult up to five years older. This clause would not apply in rape or assault cases.

“I do not want to put a kid aged 18 on trial because he had a consenting relationship with a girl of 14-and-a-half,” Mr. Dupond-Moretti said.

Alexandra Louis, a French lawmaker supporting the bill, said that the provisions that had been added to bill, such as the Romeo and Juliet clause, gave her hope that the measure would be approved by the Constitutional Council.

Some 300 amendments were discussed but the bill eventually passed unanimously and in one day. Ms. Louis said that the bill had “reached a consensus” and marked “a historic breakthrough.”

The legislation also extends beyond 30 years the statute of limitations for rape of a minor in cases where the adult has raped others, and introduces jail sentences of 10 years and a fine of 150,000 euros, or about $180,000, for anyone convicted of inciting children under the age of 15, via the internet, to commit sexual acts.

“Our task is huge,” Mr. Dupont-Moretti said. “It’s about changing the law to finally, completely and totally protect our children.”

MIAMI--(BUSINESS WIRE)--Intelli Smart Homes, the leading smart home technology company, has been recognized as one of America’s fastest-growing … END_OF_DOCUMENT_TOKEN_TO_BE_REPLACED

Customers outside a Walmart store in Torrance, California, US, on Sunday, May 15, 2022. Walmart Inc. is scheduled to release earnings figures on May … END_OF_DOCUMENT_TOKEN_TO_BE_REPLACED

The past few years have been brutal on homebuyers' budgets. Would-be buyers have been priced out of some of the most desirable neighborhoods thanks to … END_OF_DOCUMENT_TOKEN_TO_BE_REPLACED