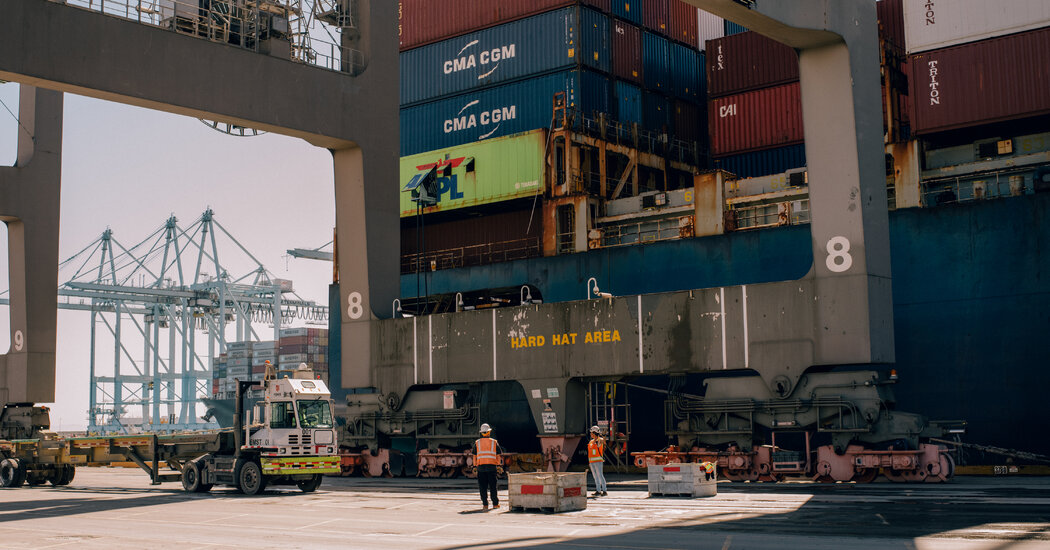 In a world contending with no end of economic troubles, a fresh source of concern now looms: the prospect of a confrontation between union dockworkers and their employers at some of the most critical ports on earth.

The potential conflict centers on negotiations over a new contract for more than 22,000 union workers employed at 29 ports along the West Coast of the United States. Nearly three-fourths work at the twin ports of Long Beach and Los Angeles, the primary gateway for goods shipped to the United States from Asia, and a locus of problems afflicting the global supply chain.

The contract for the International Longshore and Warehouse Union expires at the end of June. For those whose livelihoods are tied to ports — truckers, logistics companies, retailers — July 1 marks the beginning of a period of grave uncertainty.

A labor impasse could worsen the floating traffic jams that have kept dozens of ships waiting in the Pacific before they can pull up to the docks. That could aggravate shortages and send already high prices for consumer goods soaring.

impacts of Russia’s invasion of Ukraine and as China imposes new Covid restrictions on industry.

The dockworkers have moved unprecedented volumes of cargo during the pandemic, even as at least two dozen succumbed to Covid-19, according to the union. They are aware that many of the shipping terminals in Southern California are controlled by global carriers that have been racking up record profits while sharply increasing cargo rates — a fact cited by President Biden in his recent State of the Union address as he promised a “crackdown” to alleviate inflation.

With ports now capturing attention in Washington, some within the shipping industry express confidence that negotiations will yield a deal absent a disruptive slowdown or strike.

“There’s too much at stake for both sides,” Mario Cordero, executive director of the Port of Long Beach, said during a recent interview in his office overlooking towering cranes and stacks of containers. “There’s an incentive because the nation is watching.”

“If they don’t come to a compromise, then freight will get permanently diverted to the East Coast,” Mr. Matinifar said.

Animating contract talks is the popular notion that the longshoremen are a privileged class within the supply chain, using the union to protect their ranks — a source of resentment among other workers.

“They treat us like we’re nobodies,” said Mr. Chilton, the truck driver. “The way they talk to us, they’re very rude.”

Then, a shipping container shortage. Shipping containers piled up in many parts of the world after they were emptied. The result was a shortage of containers in the one country that needed them the most: China, where factories would begin pumping out goods in record volumes.

Union officials declined to discuss their objectives for a new contract.

Mr. McKenna, the maritime association chief executive, said the union had yet to outline demands while declining to engage in discussions before May.

He expected that the union would resist efforts to expand automation at the ports, a traditional point of contention. He said greater automation — such as adding self-driving vehicles and robotics to move cargo — was unavoidable in ports in dense urban places like Los Angeles. There, land is tight, so growth must come from increasing efficiency, rather than physically expanding.

Terminal operators accused dockworkers of slowing operations to generate pressure for a deal. The union countered that employers were the ones creating problems.

Some dockworkers question whether terminal owners are sincerely seeking to speed up cargo handling, given that shipping rates have soared amid chaos at the ports.

She said maintenance of equipment was spotty, producing frequent breakdowns, while the terminals were often understaffed — two problems that could be fixed with more spending.

“Freight rates have been impacted by the global Covid-19 recovery and the demand outpacing supply,” he said in an emailed statement. “Ships at anchor are not productive, nor are they earning revenue against a backdrop of large fixed costs.”

That Ms. Hipsher spends her nights on the docks represents an unexpected turn in her life.

Her father was a longshoreman. He urged her to attend college and do something that involved wearing business attire, in contrast to how he spent his working hours — climbing a skinny ladder to the top of ships and loading coal onto vessels.

“He would come home after work and he would have coal dust coming out of his ears, out of his nose,” Ms. Hipsher recalled. “His hands would just be completely black.”

But in 2004, when she was working as a hairstylist, her brother — also a longshoreman — suggested that she enter a lottery for the right to become a casual dockworker.

The ports had changed, her brother said. Growing numbers of women were employed.

Eighteen years later, Ms. Hipsher has gained the security of seniority, health benefits and a pension.

As contract talks approach, she pushes back against the notion that the union poses a threat to the global economy.

“You’re complaining about my wages, thinking that my wages are the source of inflation, and we don’t deserve it,” she said. “Well, look at the billions that the owners are making.”

A home inspection can spare you from unpleasant surprises after you buy. After crunching the numbers, searching your favorite neighborhoods, and … END_OF_DOCUMENT_TOKEN_TO_BE_REPLACED

DALLAS — The rollback of abortion rights has been received by many American women with a sense of shock and fear, and warnings about an ominous … END_OF_DOCUMENT_TOKEN_TO_BE_REPLACED