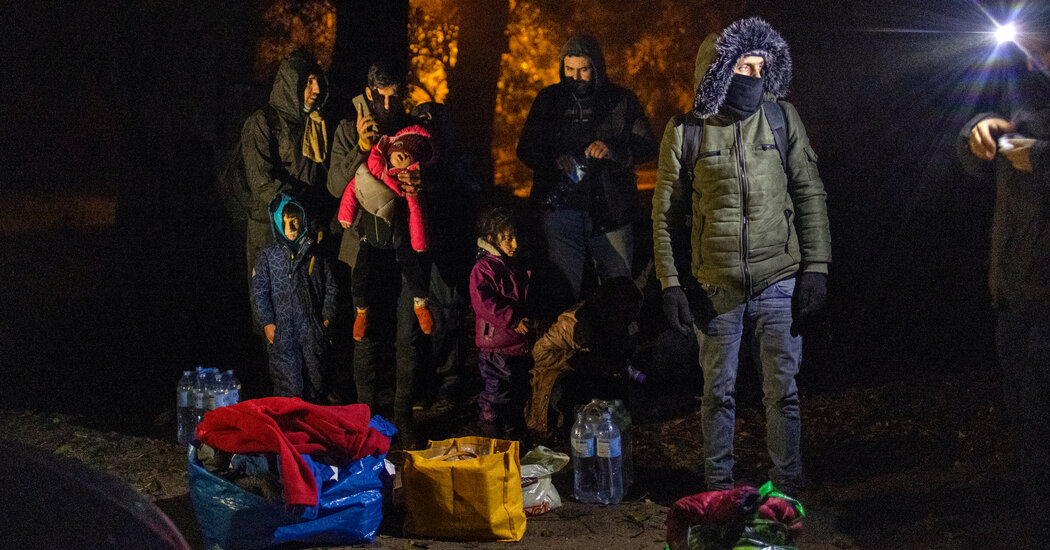 ALONG THE EASTERN POLAND BORDER — The father had walked in circles in the rain-drenched Polish forest, cradling his sick daughter, delirious after three days with barely any food or water as temperatures dipped toward freezing. He was soaked, shivering and facing a terrible choice.

His daughter, 2, has cerebral palsy and epilepsy. He had wrapped her in a thin coat to protect her from the cold, and she needed urgent medical attention. The father, an Iraqi Kurd who gave his name as Karwan, had guided his family across the border from Belarus but was now in a forested area patrolled by Polish soldiers and border guards.

The choice for the father was pitiless: seeking medical help would mean a return to Belarus and the end of his family’s desperate journey to Europe.

“I can call for an ambulance for you, but border guards will come with it,” Piotr Bystrianin, a Polish activist who arrived to help, told the family, who said they wanted to request asylum in Poland. He had found them after hours of searching in the dark, alerted to their whereabouts by a locator pin sent by cellphone.

geopolitical fight between Belarus and Poland that has escalated into a man-made humanitarian disaster for Europe. At least five people who crossed illegally into Poland have died in recent weeks, some of hypothermia and exhaustion, according to Polish officials, and three nearly drowned in a Polish swamp.

Aleksandr G. Lukashenko of Belarus is using migrants to punish the European Union for imposing sanctions on him for cracking down hard after a disputed election last year. The migrants — some fleeing poverty in Africa and elsewhere and others escaping war in countries like Afghanistan and Iraq — are allowed to enter Belarus, and then encouraged to cross over into Poland, a member of the European Union, with hopes of dispersing across the region.

Poland’s right-wing government, determined to keep out refugees and economic migrants, has flooded the eastern border area with security agents, while keeping out prying eyes by declaring it an emergency exclusion zone off limits to all but residents.

in an interview that it was “harmful” for the government to suggest that “every refugee is a terrorist or a sex offender,” adding: “We cannot accept that people die in front of our eyes.”

In a detailed report, Amnesty International last week documented how Polish border guards had held 32 Afghan asylum seekers in “horrendous conditions for weeks” and then pushed them back over the border into Belarus in violation of international law. In a separate report, the Helsinki Foundation for Human Rights said that “Poland is conducting mass illegal pushbacks at its border with Belarus.”

Some officials are pushing back against the government’s policy. Poland’s deputy commissioner for human rights denounced the treatment of asylum seekers as a “scandal” that shows “the darkest possible image of Poland.”

sanctions on Belarus for forcing down a passenger jet carrying a Belarusian dissident. Mr. Lukashenko’s government initially steered the migrants toward Lithuania, but directed them south to the Polish border after Lithuania erected a fence.

Both Lithuania and Poland have reinforced their borders, laying coils of razor wire and fortifying existing barriers, borrowing anti-migrant methods pioneered by Hungary at the height of Europe’s migrant crisis in 2015.

The European Union, loath to see a repeat of that crisis and another surge of support for populist, anti-immigration politicians, has mostly supported the efforts of Poland and Lithuania to keep out people trying to enter from Belarus.

report on the briefing: “He raped a cow and wanted to get into Poland? Details on migrants at the border.”

But the picture turned out to be a still from a zoophilia pornography movie available on the internet, and involved a horse, not a cow.

Poland has taken in hundreds of asylum-seekers airlifted from Afghanistan since the Taliban took power in August but hostility to migrants sneaking across the border has been a constant feature of Poland’s ruling Law and Justice party. In 2015, ahead of elections that brought it to power, its leader said they carried “all sorts of parasites and protozoa.”

Fundacja Ocalenie, waited patiently for the distraught family to make their decision.

Worried that his ailing daughter and others in the group might not survive, Karwan decided it would be best to seek medical help. Two ambulances arrived and, as he had been warned, border guards came, too.

Four family members were taken to the hospital, and six others to the border to be forced back into Belarus. Mr. Bystrianin and a fellow activist, Dorota Nowok, in the area to provide food and clothing, were fined for entering a restricted zone. 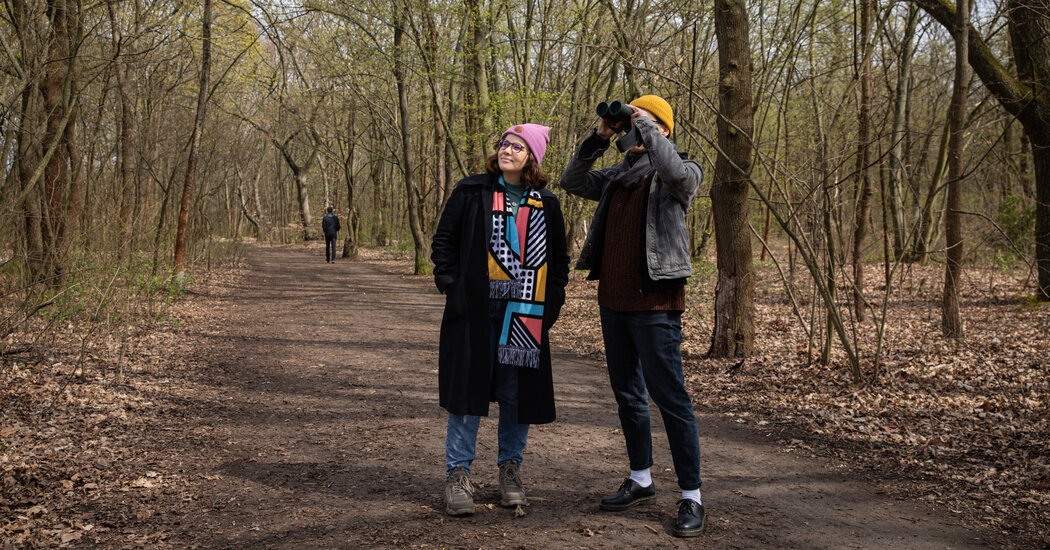 Finally fed up with an increasingly hostile environment for gay people in Poland under the governing Law and Justice party, Marta Malachowska, a 31-year-old who works in social media, decided to move to Berlin with her girlfriend in December.

“Last year the situation became too much for me,” Ms. Malachowska said, adding that she had suffered a nervous breakdown during the country’s presidential election last summer when anti-L.G.B.T.Q. rhetoric engaged in by the governing party became especially shrill in an effort to appeal to socially conservative voters. The final straw came when a close friend was assaulted because of her sexual orientation, she said.

Arriving in Berlin, she knew she had made the right choice.

“The first thing I saw was a giant rainbow flag hanging across the street from our flat,” she said. “I take my girlfriend’s hand when we walk in the street, without thinking.” She added: “Back in Poland, there was always this fear inside me. Here, literally no one cares.”

People have for decades left Poland looking for opportunities elsewhere in Europe — an exodus that grew after the country joined the European Union in 2004. But now their numbers are being added to by gay people fleeing an increasingly hostile environment in Poland.

According to a 2020 survey by ILGA-Europe, an international gay rights organization, Poland now ranks as the most homophobic country in the European Union. Activists say that violence against gay people in Poland surged last year, and included cases of physical violence, insults and the destruction of property.

Its hard to know how many gay people there are in Poland, or how many are leaving. There is no polling on their views or preferences. And since they are unable to form civil unions, gay couples are practically invisible in official terms. The law does not recognize sexual orientation or gender as motivations for hate crimes, either.

“This is not an accident,” said Jacek Dehnel, a writer who originally moved to Berlin for a literary scholarship with his husband, and decided to stay for good after watching what he called last summer’s “vicious” presidential campaign. “If there are no statistics, there is no problem.”

But anecdotally, especially within the country’s well-educated gay urban communities, there are many stories of young L.G.B.T.Q. professionals emigrating.

Originally from a small town in northern Poland, he described his childhood as one of “complete loneliness and alienation — the internet was my only escape.”

As he was preparing to leave Poland, a cardboard box filled with rainbow T-shirts, leaflets and educational books that he left outside his home in an upscale gated community in Warsaw was defaced with the message “BURN LGBT!”

“I realized it must have been one of my neighbors,” he said. “We probably saw each other in the staircase, said hello.”

He said he received many messages from people across Poland, “who would like to leave for the same reasons as us, but cannot because of money, family, or their career choices.”

Homosexuality has long been taboo in Poland, where the Roman Catholic Church, which plays a prominent role in the country’s social and political life, has worked hand in hand with the government to promote a conservative way of life.

The church, which is particularly powerful in rural areas, has adopted an actively hostile attitude toward gay people. Mr. Dehnel, the writer who moved to Berlin last year, said it was “the driving force of hate” toward the gay community.

Responding to a request for comment, the Catholic Church pointed to an official document outlining its position, stating that homosexual “inclinations” did not constitute “moral guilt,” but homosexual acts did. It declined to comment on hate speech employed by priests, and the accusation that they were contributing to the general deterioration of the safety of gay people in Poland.

Marek Jedraszewski, Poland’s archbishop, has described L.G.B.T.Q. people as an “ideology,” calling it a “rainbow pest.”

The Law and Justice party, which has been in power since 2015, has whipped up its base by waging hate campaigns, first centering around migrants, and later the L.G.B.T.Q. community. Neither the government nor the president responded to requests for comment.

In April 2019 Jaroslaw Kaczynski, the chairman of the Law and Justice party and Poland’s de facto leader, called homosexuality a “threat to Polish identity, to our nation, to its existence, and thus to the Polish state.”

Mr. Kaczynski’s message was amplified by the state-owned news media and other government figures, including local politicians.

“We should defend families from this type of corruption, depravation, absolutely immoral behavior,” Przemyslaw Czarnek, a Law and Justice deputy, who has been promoted to the position of education minister, said in an interview with the public broadcaster last year. “These people are not equal to normal people.”

Trucks funded by ultraconservative organizations have roamed the country, blaring slogans from speakers accusing gay people of pedophilia. There have been increasing cases of violence during pride marches, and against individuals.

In one incident in a village in southern Poland, a young gay man was harassed by neighbors hurling homophobic abuse at him, and one tried to poison his dog. In March 2021, another gay man was verbally attacked and then stabbed for holding hands with his partner in Warsaw.

As a gay person in Poland, Mr. Grabarczyk, the journalist who moved to Barcelona, said that psychological violence was “an everyday experience” for him.

“You are constantly reminded that you will never get the same rights as everyone else, that you are not an equal citizen,” he said.

Emboldened by the narrative coming from the country’s top officials, nearly 100 local governments declared themselves “free from L.G.B.T. ideology,” making gay Poles feel unwelcome in their own towns.

The legal status of L.G.B.T.Q. people in Poland has not changed under the rule of the Law and Justice party. They never had the right to enter civil partnerships or get married. But what changed was the viciousness of the rhetoric at the highest echelons of government and in the state-controlled news media, activists say.

And policy could yet change. In a bid to get re-elected last year, President Andrzej Duda signed a draft law that would amend the Constitution to ban adoptions by gay people.

Before Ms. Malachowska, the social media specialist, moved to Berlin, she was concerned about the practical implications of the legal limbo she and her girlfriend would be in if they stayed in Poland. There, they would not be considered next of kin in a medical emergency, or be able to inherit from each other.

In Poland, she also began to get emotionally attached to the idea of marrying her partner.

“We already checked how to do it in Berlin, and I started visualizing how it would look like — the first time in my life I dared to even imagine that,” she said.

While she is happy to be in Berlin, she is sad that her grandmother still doesn’t know about her sexual orientation. “I told her I am moving to Berlin with my flatmate,” she said. “It feels awful to lie to my closest family.”

Whether you optimistically hope that mortgage rates will decline or are resigned that rates will stay elevated above the historic lows of 2021, you … END_OF_DOCUMENT_TOKEN_TO_BE_REPLACED