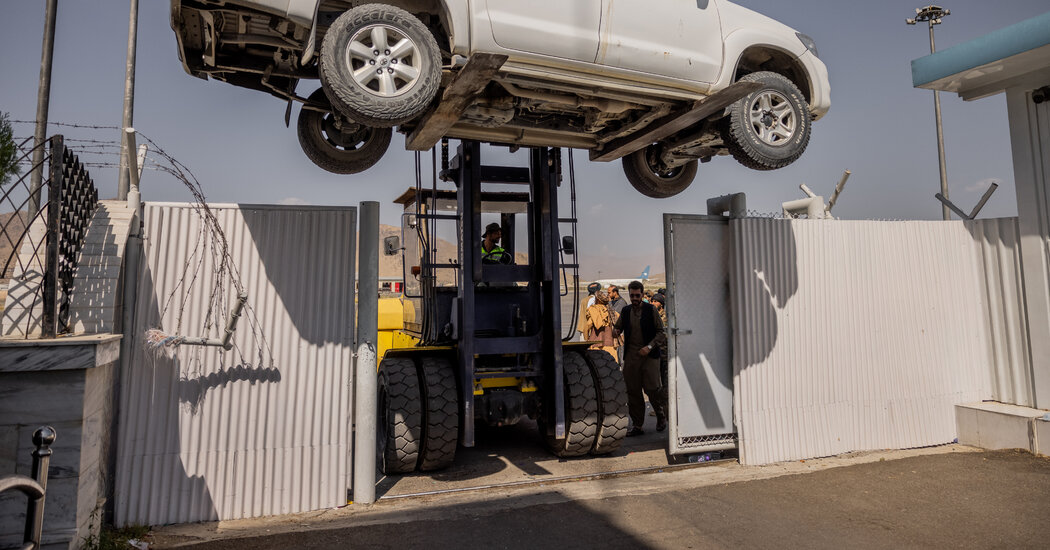 KABUL, Afghanistan — Afghanistan’s plunge into chaos, isolation and near-destitution under its newly ascendant Taliban rulers appeared to slow on Thursday, with the first significant moves to salvage Kabul’s inoperable airport, an increased flow of U.N. aid and word that international money transfers had resumed to the country, where many banks are shuttered.

But these developments did not signal any diminished suspicion toward the Taliban, the hard-line movement of Islamic extremists, many of them on terrorist watch lists, who seized power last month after two decades of war against an American-led military coalition and the government the United States had propped up.

And despite expectations that the Taliban leaders now ensconced in Kabul’s presidential palace would formally announce the makeup of a new government on Thursday, the anticipated announcement was delayed.

ended on Monday night. The airport remained closed to the public on Thursday, its hangars strewn with debris and some aircraft damaged by shrapnel, bullets and vandalism, but the Taliban permitted reporters inside, where security personnel and technicians from Qatar who had been sent to help reopen the airport were busy.

Teams of Qataris ferried back and forth in armored Land Cruisers at the airport’s VIP terminal under a giant billboard of Ashraf Ghani, the former president who fled abroad on Aug. 15 as Taliban fighters entered Kabul all but unopposed.

“The airport will open very soon,” said Daoud Sharifi, the chief operating officer of Kam Air, Afghanistan’s largest privately owned airline, which basically shut down even before the Taliban triumphed more than two weeks ago.

Western Union announced that it was resuming money transfers to Afghanistan, enabling customers from 200 countries and territories to “once again send money to their loved ones in the country.” Western Union, which had halted the transfers a few weeks ago, took the step as the U.S. Treasury Department said American financial institutions could process personal remittances.

Such remittances from the Afghan diaspora, a crucial source of income and foreign currency in Afghanistan, had basically stopped. At the same time, financial institutions in the United States and elsewhere have prevented the Taliban from gaining access to Afghan government bank reserves and other financial assets.

The dearth of cash in Afghanistan has become an acute source of desperation, seen in the lines of customers queued outside banks in the prelude and aftermath of the Taliban takeover. It also represents a quandary for the United States, which does not want to be seen as penalizing ordinary Afghans, many of them still in shock over the abrupt U.S. departure.

Despite the Taliban’s effort to project an image of responsibility in reopening Kabul’s airport, enormous challenges remain not just for that facility but for basic aviation security. Most foreign carriers are now avoiding Afghanistan’s air space, depriving it of yet another important source of income: overflight fees, which countries charge airlines for permission to fly over their territory.

Both of Afghanistan’s carriers — Kam Air and the state-owned Ariana Airlines — are crippled for now.

In a recent interview from Doha, Qatar, Farid Paikar, the chief executive of Kam Air, said his airline had been reeling from heavy losses in the months leading up to the tumult during the Kabul airport evacuation, which left two of its aircraft damaged. He also said the airport’s aviation control systems had been damaged and that many Kam Air employees, including foreign pilots, engineers and technicians, had been forced to flee.

“It will take so long to reactivate all these systems and the terminal,” Mr. Paikar said. “The international community should help us with this, but I don’t know if they will be interested.”

A former Ariana official said three of that carrier’s four aircraft had been damaged at the Kabul airport, along with many computer and aviation systems.

An interview with an airport security guard who managed to flee to Doha in the evacuation offered a vivid account of the scene the day after Kabul fell to the Taliban, basically describing it as a total breakdown in authority.

The security guard, Gulman, who identified himself by only one name for fear of reprisal, said crowds of Afghans had poured onto the tarmac, clambering to board any departing flights. Windows of grounded Kam Air planes were cracked and seats torn apart, he said.

But the biggest blow to the airport’s viability, he said, were the employees who joined the frenzy of others scrambling to leave: security guards, airline crews and air traffic controllers who abandoned their posts.

Gulman said he had arrived at work expecting to inspect bags at his scanner as usual. Instead, he found every other luggage scanner abandoned and the uniforms of his colleagues scattered on the floor.

For half an hour, Gulman said, he stood at his usual post, debating what to do before another colleague arrived and convinced him that the two of them — having gotten past the crowds at the airport gate because of their security guard uniforms — should also board a flight.

ROSWELL, Ga.--(BUSINESS WIRE)--Berkshire Hathaway HomeServices Georgia Properties, one of the largest and most successful real estate organizations in … END_OF_DOCUMENT_TOKEN_TO_BE_REPLACED

The real estate market seems to have a split personality.On the positive side for homebuyers, the number of properties for sale shot up by a … END_OF_DOCUMENT_TOKEN_TO_BE_REPLACED

Kim Tae-Ri plays a gun-toting time traveler in 'Alienoid.' Well Go USA Director Choi Dong-hoon likes a challenge. That much is apparent in his latest … END_OF_DOCUMENT_TOKEN_TO_BE_REPLACED