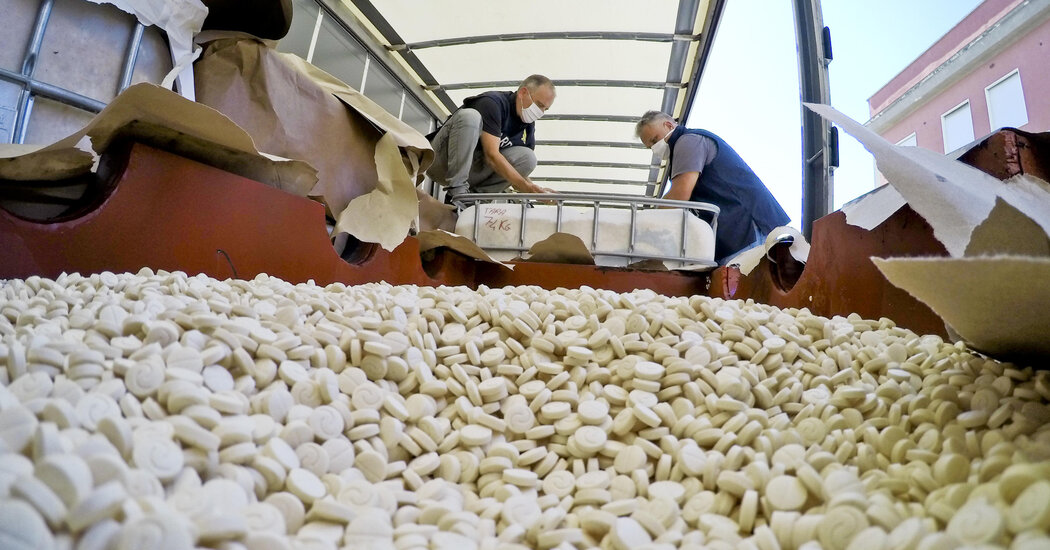 BEIRUT, Lebanon — Built on the ashes of 10 years of war in Syria, an illegal drug industry run by powerful associates and relatives of President Bashar al-Assad has grown into a multi-billion-dollar operation, eclipsing Syria’s legal exports and turning the country into the world’s newest narcostate.

Its flagship product is captagon, an illegal, addictive amphetamine popular in Saudi Arabia and other Arab states. Its operations stretch across Syria, including workshops that manufacture the pills, packing plants where they are concealed for export, and smuggling networks to spirit them to markets abroad.

An investigation by The New York Times found that much of the production and distribution is overseen by the Fourth Armored Division of the Syrian army, an elite unit commanded by Maher al-Assad, the president’s younger brother and one of Syria’s most powerful men.

Major players also include businessmen with close ties to the government, the Lebanese militant group Hezbollah, and other members of the president’s extended family, whose last name ensures protection for illegal activities, according to The Times investigation, which is based on information from law enforcement officials in 10 countries and dozens of interviews with international and regional drug experts, Syrians with knowledge of the drug trade and current and former United States officials.

hub of hashish production and a stronghold of Hezbollah, an Iran-backed militant group that is now part of Lebanon’s government.

While the pharmaceutical Captagon contained the amphetamine fenethylline, the illicit version sold today, often referred to as “captagon” with a lowercase c, usually contains a mix of amphetamines, caffeine and various fillers. Cheap versions retail for less than a dollar a pill in Syria, while higher quality pills can sell for $14 or more apiece in Saudi Arabia.

After the Syrian war broke out, smugglers took advantage of the chaos to sell the drug to fighters on all sides, who took it to bolster their courage in battle. Enterprising Syrians, working with local pharmacists and machinery from disused pharmaceutical factories, began making it.

Syria had the needed components: experts to mix drugs, factories to make products to conceal the pills, access to Mediterranean shipping lanes and established smuggling routes to Jordan, Lebanon and Iraq.

As the war dragged on, the country’s economy fell apart and a growing number of Mr. al-Assad’s associates were targeted with international sanctions. Some of them invested in captagon, and a state-linked cartel developed, bringing together military officers, militia leaders, traders whose businesses had boomed during the war and relatives of Mr. al-Assad.

Mr. Khiti and Mr. Taha. It called Mr. Taha an intermediary for the Fourth Division whose businesses “generate revenue for the regime and its supporters.”

Captagon is still produced in and smuggled through Lebanon. Nouh Zaiter, a Lebanese drug lord who now lives mostly in Syria, links the Lebanese and Syrian sides of the business, according to regional security officials and Syrians with knowledge of the drug trade.

A tall, longhaired Bekaa Valley native, Mr. Zaiter was sentenced in absentia to life in prison with hard labor by a Lebanese military court this year for drug crimes.

Reached by phone, Mr. Zaiter said his business was hashish and denied that he had ever been involved with captagon.

“I have not and will never send such poisons to Saudi Arabia or anywhere else,” he said. “Even my worst enemy, I won’t provide him with captagon.”

sewn into the linings of clothes.

In May, after Saudi authorities discovered more than five million pills hidden inside hollowed out pomegranates shipped from Beirut, they banned produce from Lebanon, a major blow to local farmers.

According to The Times’ database, the number of pills seized has increased every year since 2017.

The street value of the drugs seized has outstripped the value of Syria’s legal exports, mostly agricultural products, every year since 2019.

Last year, global captagon seizures had a street value of about$2.9 billion, more than triple Syria’s legal exports of $860 million.

Law enforcement agencies have struggled to catch the smugglers, not least because the Syrian authorities offer little if any information about shipments that originated in their country.

The name of shippers listed on manifests are usually fake and searches for the intended recipients often lead to mazes of shell companies.

The Italian seizure of 84 million pills in Salerno last year, the largest captagon bust ever at the time, had come from Latakia. Shipping documents listed the sender as Basil al-Shagri Bin Jamal, but the Italian authorities were unable to find him.

GPS Global Aviation Supplier, a company registered in Lugano, Switzerland, that appears to have no office.

Phone calls, text messages and emails to the company received no response, and the wealth management firm that the company listed as its mailing address, SMC Family Office SA, declined to comment.

In June 2019, workers in Piraeus found five tons of captagon, worth hundreds of millions of dollars, inside sheets of fiberboard on their way to China.

Seehog, a Chinese logistics firm. When reached by phone, she denied knowing anything about the shipment and refused to answer questions.

“You are not the police,” she said, and hung up.

There was one more clue in the documents: The sender was Mohammed Amer al-Dakak, with a Syrian phone number. When entered into WhatsApp, the phone number showed a photo of Maher al-Assad, the commander of Syria’s Fourth Armored Division, suggesting the number belonged to, at least, one of his fans.

A man who answered that number said that he was not Mr. al-Dakak. He said that he had acquired the phone number recently.

Loukas Danabasis, the head of the narcotics unit of Greece’s financial crime squad, said the smugglers’ tactics made solving such cases “difficult and sometimes impossible.”

While officials in Europe struggle to identify smugglers, Jordan, one of the United States’ closest partners in the Middle East, sits on the front lines of a regional drug war.

“Jordan is the gateway to the Gulf,” Brig. Gen. Ahmad al-Sarhan, the commander of an army unit along Jordan’s border with Syria, said during a visit to the area.

Overlooking a deep valley with views of Syria, General al-Sarhan and his men detailed Syrian smugglers’ tricks to bring drugs into Jordan: They launch crossing attempts at multiple spots. They attach drugs to drones and fly them across. They load drugs onto donkeys trained to cross by themselves.

Sometimes the smugglers stop by Syrian army posts before approaching the border.

The drug trade worries Jordanian officials for many reasons.

The quantities are increasing. The number of Captagon pills seized in Jordan this year is nearly double the amount seized in 2020, according to Colonel Alqudah, the head of the narcotics department.

And while Jordan was originally just a pathway to Saudi Arabia, as much as one-fifth of the drugs smuggled in from Syria are now consumed in Jordan, he estimated. The increased supply has lowered the price, making it easy for students to become addicted.

Even more worrying, he said, is the growing quantity of crystal meth entering Jordan from Syria, which poses a greater threat. As of October, Jordan had seized 132 pounds of it this year, up from 44 pounds the year before.

“We are now in a dangerous stage because we can’t go back,” said Dr. Morad al-Ayasrah, a Jordanian psychiatrist who treats drug addicts. “We are going forward and the drugs are increasing.”

Reporting was contributed by Niki Kitsantonis in Athens; Gaia Pianigiani in Rome; Kit Gillet in Bucharest, Romania; Hannah Beech in Bangkok; and employees of The New York Times in Damascus, Syria, and Beirut, Lebanon.

If you've been to Baker Beach in San Francisco, you've probably looked up at 1 25th Avenue. The home, which sits among several stunning homes along … END_OF_DOCUMENT_TOKEN_TO_BE_REPLACED