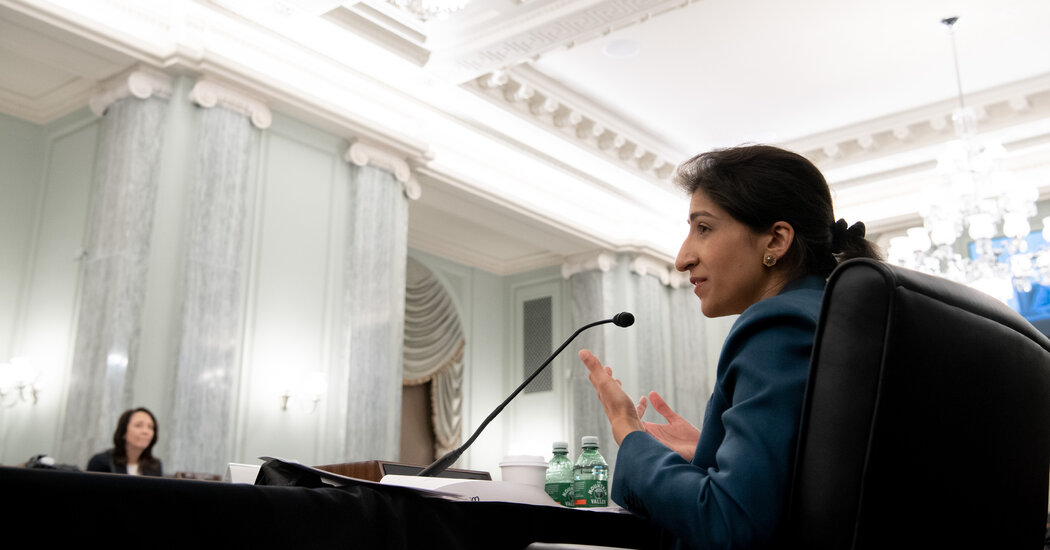 Lina Khan, a Democratic nominee to the Federal Trade Commission, outlined strong concerns over competition in the tech industry during her confirmation hearing on Wednesday.

Ms. Khan, a law professor and a former staffer at the F.T.C. who President Biden nominated to the agency in March, warned of the cascading power of tech companies that has allowed them to easily expand their reach across markets.

At the Senate Commerce committee hearing, Ms. Khan, 32, said she was “seeing whole range of potential risks. One that comes up across board is that the ability to dominate one market gives companies, in some instances, the ability to expand into adjacent markets.”

She also focused on the online advertising market and how the consumer data mining that fuels it poses potential harms for consumers. The business model, she said, incentivizes more and more data collection.

In a 2017 Yale Law Journal article titled “Amazon’s Antitrust Paradox,” she questioned the bias of antitrust experts toward consumer prices as the key metric for antitrust violation. Even though Amazon offers consumers lower prices in many cases, she argued the company could harm competition by squeezing out small-business rivals who rely on its marketplace.

President Biden’s nomination of Ms. Khan to one of three Democratic seats at the F.T.C. has been taken as a sign of how the White House plans to be tough on tech. Tim Wu, a progressive critic of Facebook and other big tech companies, was also recently named to a role in the White House.

Ms. Khan said in Wednesday’s hearing that approvals of tech mergers during the Obama administration were a “missed opportunity” to slow the growth of the companies.

Tech mergers approved during that time underestimated the particular economics of tech companies, she said. Regulators that approved the deals may have also assumed the dynamics of the tech market would allow for new entrants to go up against the bigger companies, she added.

her past work investigating the tech giants for the House antitrust subcommittee. The House released a report in October that found the digital platforms were monopolies.

Ms. Khan said she would follow ethics rules that prohibit her involvement in investigations into companies where she has financial and personal ties. She said she did not have those ties to any tech giants.

Most government entities in Texas will soon be prohibited from requiring people to wear masks, Gov. Greg Abbott announced on Tuesday, days after … END_OF_DOCUMENT_TOKEN_TO_BE_REPLACED

GAZA CITY — The nine-day battle between Hamas militants and the Israeli military has damaged 17 hospitals and clinics in Gaza, wrecked its only … END_OF_DOCUMENT_TOKEN_TO_BE_REPLACED

At this point in your life, chances are good you've mastered basic potty training skills. But there's one golden rule we don't all follow in the … END_OF_DOCUMENT_TOKEN_TO_BE_REPLACED