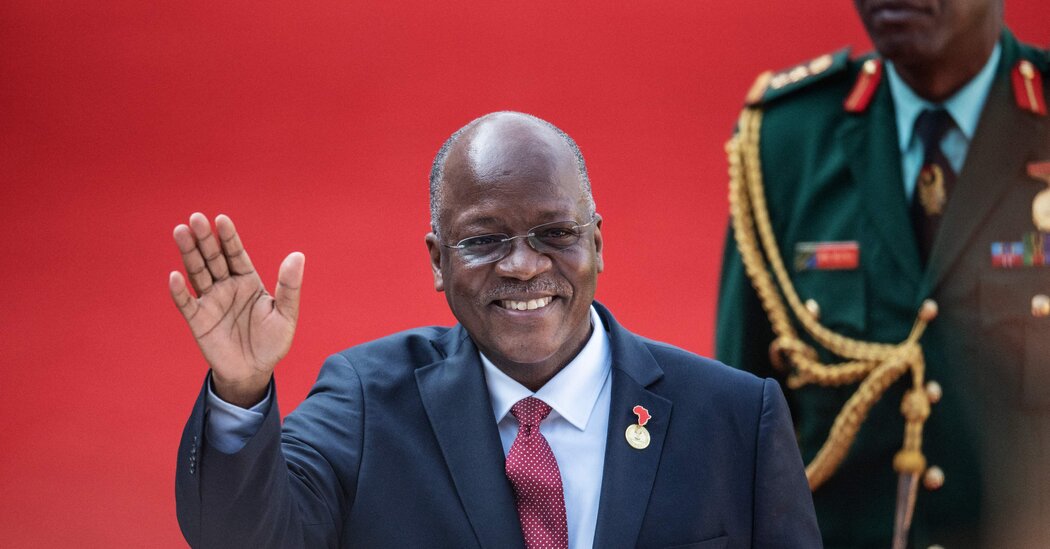 NAIROBI, Kenya — As unrecorded numbers of Tanzanians succumbed to the coronavirus, the country’s president consistently downplayed the pandemic, dismissing protective measures, scoffing at vaccines and saying God had helped to eliminate the virus.

Now, President John Magufuli’s unusually lengthy absence from public view is fueling speculation that he himself is critically ill with Covid-19 and is being treated outside the country.

The rumors started swirling this week after Tanzania’s leading opposition figure, Tundu Lissu, said Mr. Magufuli was infected with the virus and was being treated in a hospital in neighboring Kenya. In a text message, Mr. Lissu said he had it “from fairly authoritative sources” that the president was flown to Kenya’s capital, Nairobi, on Monday night and checked into Nairobi Hospital, one of the largest private facilities in that country.

On Tuesday, Mr. Lissu demanded that authorities disclose the whereabouts of the president, who has not appeared in public for almost two weeks. On Wednesday, he said that Mr. Magufuli was transferred to a hospital in India to “avoid social media embarrassment” in case “the worst happened” in Kenya.

did not attend a virtual summit for the leaders of the East African regional bloc on Feb. 27 and was represented by Vice President Samia Suluhu Hassan.

“His COVID denialism in tatters, his prayer-over-science folly has turned into a deadly boomerang,” he said in another post on Thursday.

As speculation concerning his whereabouts and illness remained rife on social media, Kenya’s Daily Nation newspaper also reported that an “African leader” had been admitted to Nairobi Hospital and cited diplomatic sources who said the leader was “on a ventilator.”

threatened to punish those circulating conjectures about his health.

“The head of the state is not a television anchor who had a program but didn’t show up,” Mwigulu Nchemba, minister for legal and constitutional affairs, said in a Twitter post. “The head of state is not the leader of jogging clubs who should be in the neighborhood every day.”

Minister of Information Innocent Bashungwa warned the public and the media that using “rumors” as official information violated the country’s media laws.

From the beginning of the pandemic a year ago, Mr. Magufuli, 61, railed against masks and social distancing measures, advocated unproven remedies as cures and said the country had “absolutely finished” the virus through prayer. Known popularly as “The Bulldozer,” Mr. Magufuli also questioned the efficacy of vaccines, arguing that if those produced by “the white man” were effective, AIDS, tuberculosis and malaria would have been eliminated.

Under Mr. Magufuli’s leadership, which began with his election in 2015, Tanzania, once a model of stability in the region, has slid toward autocracy, with the authorities cracking down on the press, opposition figures and rights groups. Mr. Magufuli won a second five-year term last October, in an election marred by accusations of widespread fraud and irregularities.

Mr. Lissu, who was the main opposition candidate against Mr. Magufuli, left the country for exile in Belgium, where he remains.

Since last April, Tanzania has not shared data on the coronavirus with the World Health Organization and has reported only 509 cases and 21 deaths from Covid-19. This lack of transparency has been widely condemned, including by the director general of the W.H.O., Dr. Tedros Adhanom Ghebreyesus.

warned of a “significant increase” in Covid-19 cases. The Roman Catholic Church has also called on the government to admit the truth of the virus and has urged its congregants to avoid large gatherings.

Tanzanian leaders like Seif Sharif Hamad, the first vice president of Tanzania’s semiautonomous island of Zanzibar, have died after contracting the coronavirus. Soon after news spread that Mr. Hamad had succumbed to the virus last month, the minister of finance, Philip Mpango, appeared at a news conference in Tanzania’s capital, Dodoma, to deny rumors that he too had died. Mr. Mpango, though, was not particularly reassuring when, flanked by unmasked doctors, he began wheezing heavily and coughing fitfully.

But for Mr. Lissu, it was too little too late.

“It’s a sad comment on his stewardship of our country that it’s come to this,” Mr. Lissu said in a post on Twitter about Mr. Magufuli’s infection, which he said is evidence “that prayers, steam inhalations and other unproven herbal concoctions he’s championed are no protection against coronavirus!”