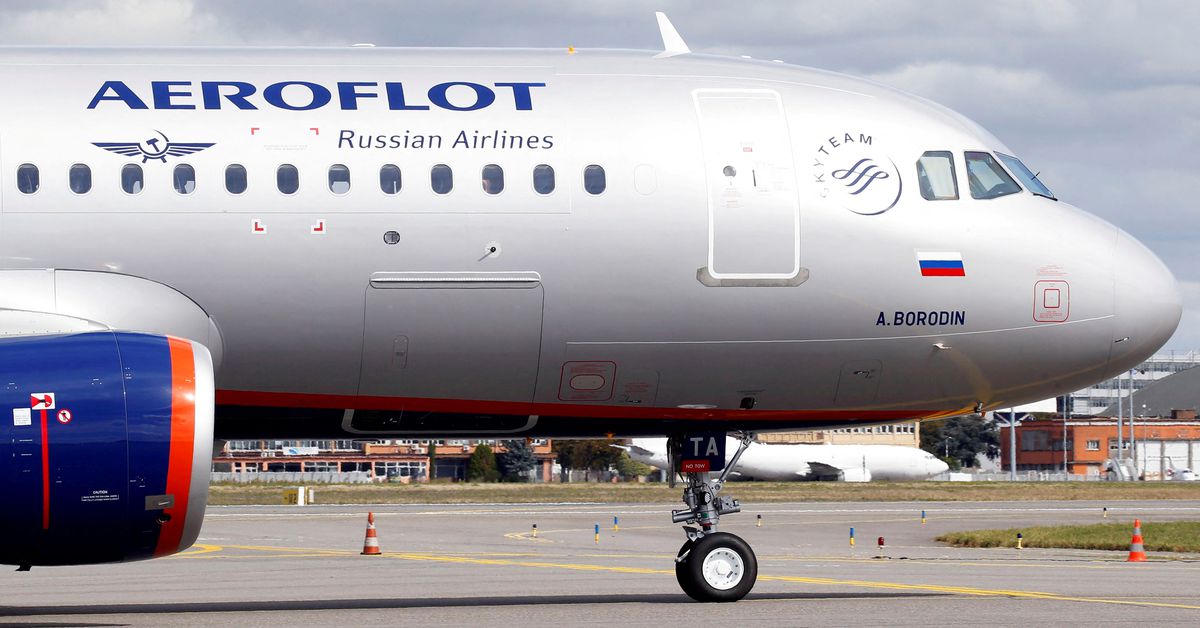 The logo of Russia’s flagship airline Aeroflot is seen on an Airbus A320-200 in Colomiers near Toulouse, France, September 26, 2017. REUTERS/Regis Duvignau

Feb 25 (Reuters) – Some Western companies severed their ties with Russia on Friday, and others studied whether and how to do so, as President Vladimir Putin’s invasion of Ukraine triggered sanctions and pressure to abandon some business dealings. read more

European sports and entertainment businesses were among the first to announce such moves.

Premier League club Manchester United (MANU.N) withdrew the sponsorship rights of Russian airline Aeroflot (AFLT.MM), Formula One canceled the 2022 Russian Grand Prix, and organizers of the Eurovision song contest said Russia would not be allowed to participate in this year’s final. read more

The “inclusion of a Russian entry in this year’s (Eurovision) contest would bring the competition into disrepute,” the European Broadcasting Union (EBU) said in a statement.

Gadget maker Dell Technologies Inc (DELL.N) said it suspended sales in Ukraine and Russia and would closely monitor the situation to determine next steps. New U.S. rules on exports to Russia announced on Thursday covered computers, and Dell accounted for about 6% of computer shipments to Russia last quarter, according to researcher IDC.

U.S. carrier Delta Air Lines Inc (DAL.N) said, without providing a reason, that it had suspended its codesharing service with Aeroflot.

Alexandria, Virginia, marketing consultant Dan Sondhelm said companies were trying to balance the reputational risk of continuing to deal with Moscow with their economic interests and concerns about upsetting some of their investors.

“It will take some time for companies to make their decisions to act or do nothing,” Sondhelm said. “It doesn’t happen overnight.”

On Friday, European Union member states agreed to freeze European assets of Putin and his foreign minister, among other measures. read more

Some experts and attorneys said Western executives would seek to end commercial arrangements, even if they were not obliged to do so, to avoid public relations problems or the bureaucracy of trying to navigate sanctions in areas such as technology exports. read more

“What a lot of them will do is just drop any Russian customers. They will just say ‘we’re not going to deal with that,'” said William Reinsch, a trade expert at the Center for Strategic and International Studies and a former U.S. Commerce Department export official.

David Smith, partner at insurance broker McGill and Partners in London, said that even before the invasion and sanctions, two underwriters had told him they did not want to insure a shipping company operating in Russian waters on the grounds they did not want to facilitate business with Russia.

“People should be thinking more and more about the moral issue, it’s not just a box-ticking exercise,” Smith said.

Western consumer brands operating in the region could face backlash. For instance, several posters on Facebook responded with outrage after a verified account for McDonald’s Corp (MCD.N) posted that it closed restaurants in Ukraine, but did not address its Russia locations.

“The Russian occupiers, the military, and their children will continue to enjoy a variety of burgers. And my child is sitting in a bomb shelter with tears in his eyes,” one of the posters, identifying himself as Vitaliy Skalsky, told Reuters in Ukrainian in a Facebook message.

McDonald’s representatives in the United States and Ukraine did not respond to requests for comment.

Western banks and financial firms have been studying the practical implications of new sanctions, said several sources in the heavily regulated industries.

The rules prohibit direct dealings with sanctioned entities and “correspondent” banking relationships that enable Russian banks to make international payments via U.S. banks. But they are less clear on areas such as buying and selling Russian sovereign debt in secondary markets, said a senior source at a large European bank with U.S. operations.

Many details on how the sanctions will work need to be confirmed by the U.S. Treasury’s Office of Foreign Assets Control (OFAC) and other international regulators, this source said. OFAC did not respond immediately to requests for comment.

The chief investment officer of one European asset manager said on condition of anonymity it was considering whether to sell sovereign and corporate debt it holds in Russia, much as it might sell the bonds of a company that failed to take action on an issue like climate change.

“Russian actions have fallen foul of the standard you would have at the corporate level,” the executive said.

But client interests might argue for a different approach, this person said. “At the other side of the transaction is our client, who might be losing if you’re selling it in a fire sale,” the executive said.

A home inspection can spare you from unpleasant surprises after you buy. After crunching the numbers, searching your favorite neighborhoods, and … END_OF_DOCUMENT_TOKEN_TO_BE_REPLACED