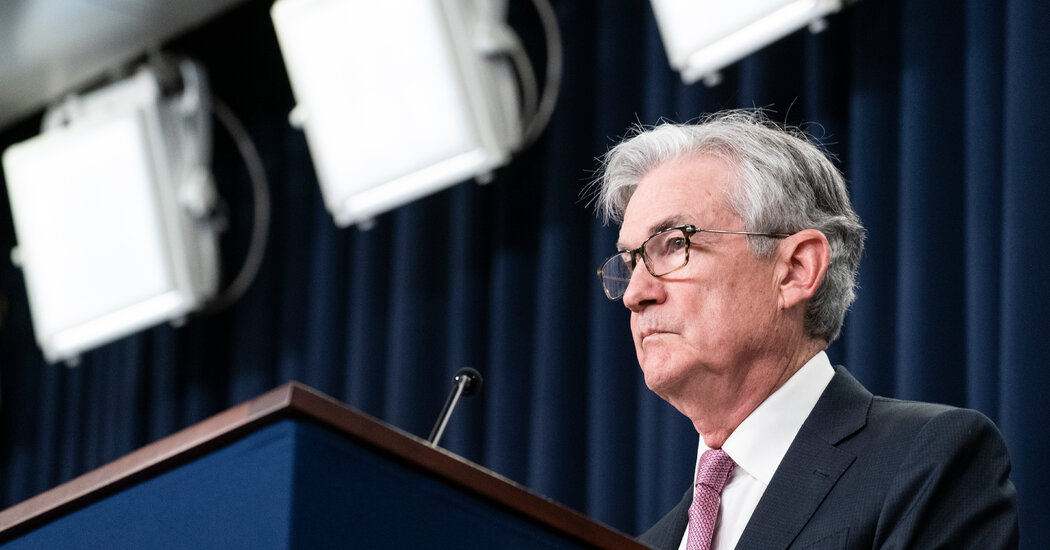 Some Federal Reserve officials have begun to acknowledge that they were too slow to respond to rapid inflation last year, a delay that is forcing them to constrain the economy more abruptly now — and one that could hold lessons for the policy path ahead.

Inflation began to accelerate last spring, but Fed policymakers and most private-sector forecasters initially thought price gains would quickly fade. It became clear in early fall that fast inflation was proving to be more lasting — but the Fed pivoted toward rapidly removing policy support only in late November and did not raise rates until March.

Several current and former Fed officials have suggested in recent days that, in hindsight, the central bank should have reacted more quickly and forcefully last fall, but that both profound uncertainty about the future and the Fed’s approach to setting policy slowed it down.

Officials had spent years dealing with tepid inflation, which made some hesitant to believe that rapidly rising prices would last. Even as they became more concerned, it took the Fed’s large group of policymakers time to come to an agreement on how to respond. Another complicating factor was that the Fed had made clear promises to markets about how it would remove support for the economy, which made adjusting quickly more difficult.

8.5 percent from a year earlier, the fastest rate since 1981. Consumer price increases are expected to remain rapid when fresh data are released Wednesday.

And as high prices have lingered, inflation expectations have been creeping up, threatening to change household and business behavior in ways that perpetuate the problem.

Because inflation is eating away at paychecks and making it more difficult for families to afford groceries and cars, it has emerged as a major political issue for President Biden, whose approval ratings have fallen over concerns about his handling of the economy. During remarks at the White House on Tuesday, Mr. Biden called inflation his “top domestic priority” and said his administration was taking steps to contain it. He also sought to push back on Republicans, who have spent months blaming him for stoking inflation, saying their policy ideas were “extreme” and would hurt working families.

biggest increase since 2000, while broadcasting that two more large adjustments could be coming. They are also going to start shrinking their $9 trillion balance sheet of bond holdings next month.

If the Fed continues to rapidly adjust policy this year as it tries to catch up, policymakers risk slamming the brakes on a speeding economy. Such hard stops can hurt, pushing up unemployment and possibly tipping off a recession. Officials typically prefer to apply their policy brakes gradually, increasing the chances that the economy can slow down painlessly.

Still, several Fed officials pointed out that it was easier to say what the Fed should have done in 2021 after the fact — that in the moment, it was difficult to know price increases would last. Inflation initially came mainly from a few big products that were in short supply amid supply chain snarls, like semiconductors and cars. Only later in the year did it become obvious that price pressures were broadening to food, rent and other areas.

“I try to give some grace, and say: In a very uncertain time, with an unprecedented setting, with no real models to guide us, people are going to do the best they can,” Raphael Bostic, the president of the Federal Reserve Bank of Atlanta, said in an interview Monday. Mr. Bostic was an early voice suggesting that the Fed should stop buying bonds and think about raising interest rates.

Officials have said it was the acceleration in inflation data in September, followed by rising employment costs, that convinced them that price gains might last and that the central bank needed to act decisively. The Fed chair, Jerome H. Powell, pivoted on policy in late November as those data points added up.

a complicating factor: Mr. Powell was waiting to see if he would be reappointed by the Biden administration, which did not announce its decision to renominate him until mid-November.

“Banking With Interest” podcast episode last week, said reacting to the data was “hard to do until there was clarity as to what the leadership going forward of the Fed was going to be.”

Plus, the Fed had promised to withdraw policy in a certain way, which prevented a rapid reorientation once officials began to fret that inflation might last. Policymakers had pledged to keep interest rates at rock bottom and continue to buy huge sums of bonds until the job market had healed substantially. They had also clearly laid out how they would remove support when the time came: Bond purchases would slow first, then stop, and only then would rates rise.

The point was to convince investors that the Fed would not stop helping the economy too early and to avoid roiling markets, but that so-called forward guidance meant that pulling back support was a drawn-out process.

“Forward guidance, like everything in economics, has benefits and costs,” Richard H. Clarida, who was vice chair of the Fed in 2021 and recently left the central bank, said at a conference last week. “If there’s guidance that the committee feels bound to honor,” he added, it can be complicated for the Fed to move through a sequence of policy moves.

Christopher Waller, a governor at the Fed, noted the central bank wasn’t just sitting still. Markets began to adjust as the Fed sped up its plans to remove policy support throughout the fall, which is making money more expensive to borrow and starting to slow down economic conditions. Mortgage rates, one window into how Fed policy is playing out into the economy, began to move up notably in January 2021 and are now at the highest level since the 2008 housing crisis.

Mr. Waller also pointed out that it was hard to get the Fed’s large policy-setting committee into agreement rapidly.

“Policy is set by a large committee of up to 12 voting members and a total of 19 participants in our discussions,” he said during a speech last week. “This process may lead to more gradual changes in policy as members have to compromise in order to reach a consensus.”

Loretta Mester, the president of the Federal Reserve Bank of Cleveland, said in an interview on Tuesday that different people on the committee “looked at the same data with different lenses, and that’s just the nature of the beast.”

But the Fed seems to be learning lessons from its 2021 experience.

“It’s a very difficult environment to try to give forward guidance, 60, 90 days in advance — there are just so many things that can happen in the economy and around the world,” Mr. Powell said at a news conference last week. “So we’re leaving ourselves room to look at the data and make a decision as we get there.”

The war in Ukraine is the latest surprise that is changing the outlook for the economy and inflation in ways that are hard to predict, Mr. Bostic from Atlanta said.

“I have been humbled, chastened — whatever — to think that I know the range of possible things that can happen in the future,” he said. “I’ve really tried to back off of leaning into one kind of story or path.”

GREENVILLE, N.C.--(BUSINESS WIRE)--Employers aiming to win the war on talent have a new “A” team to tap into: college and professional athletes. … END_OF_DOCUMENT_TOKEN_TO_BE_REPLACED

Mortgage rates are likely to rise in July, extending a seven-month streak. High inflation, and the Federal Reserve's efforts to control it, have … END_OF_DOCUMENT_TOKEN_TO_BE_REPLACED